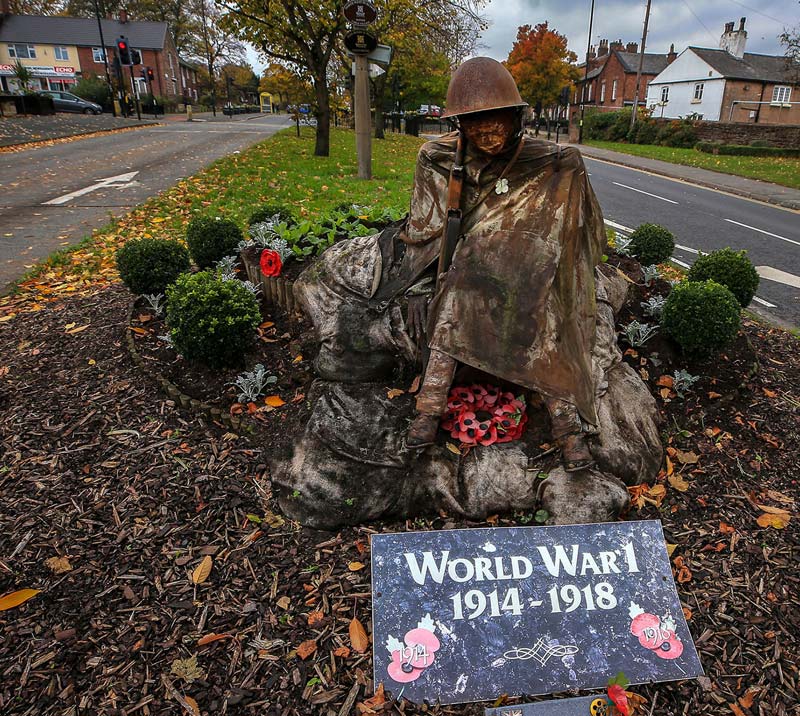 The figure of a World War I soldier sits on a central reservation in Liverpool, England. Abaca Press

The First World War ended 100 years ago this month on , at Nearly 20 million people had perished since the war began on .

Czarist gave up in . Tens of thousands of German and Austrian soldiers were freed to redeploy to the and finish off the exhausted French and British armies.

The late-entering did not declare war on and - until . Six months later, America had still not begun to deploy troops in any great number.

Then, suddenly, everything changed. By summer 1918, hordes of American soldiers began arriving in in unimaginable numbers of up to 10,000 doughboys a day. Anglo-American convoys began devastating German submarines. The German high command's tactical blunders stalled the German offensives of spring 1918 -- the last chance before growing Allied numbers overran German lines.

Nonetheless, World War I strangely ended with an armistice -- with German troops still well inside and . Revolution was brewing in German cities back home.


The three major Allied victors squabbled over peace terms. America's idealist president, , opposed an Allied invasion of German and to occupy both countries and enforce their surrenders.

By the time the formal began in , millions of soldiers had gone home. German politicians and veterans were already blaming their capitulation on "stab-in-the-back" traitors and spreading the lie that their armies lost only because they ran out of supplies while on the verge of victory in enemy territory.

The Allied victors were in disarray. Wilson was idolized when he arrived in for peace talks in -- and was hated for being self-righteous when he left six months later.

The Treaty of Versailles proved a disaster, at once too harsh and too soft. Its terms were far less punitive than those the victorious Allies would later dictate to after World War II. Earlier, itself had demanded tougher concessions from a defeated in 1871 and in 1918.

In the end, the Allies proved unforgiving to a defeated in the abstract but not tough enough in the concrete.

One ironic result was that the victorious but exhausted Allies announced to the world that they never wished to go to war again. Meanwhile, the defeated and humiliated Germans seemed all too eager to fight again soon to overturn the verdict of 1918.

The consequence was a far bloodier war that followed just two decades later. Eventually, "the war to end all wars" was rebranded "World War I" after World War II engulfed the planet and wiped out some 60 million lives.

What can we learn from the failed armistice of 1918?

Keeping the peace is sometimes even more difficult than winning a war.

For an enemy to accept defeat, it must be forced to understand why it lost, suffer the consequences of its aggressions -- and only then be shown magnanimity and given help to rebuild.

Losers of a war cannot pick and choose when to quit fighting in enemy territory.

Had the Allies continued their offensives in the fall of 1918 and invaded , the peace that followed might have more closely resembled the unconditional surrender and agreements that ended WWII, leading to far more than just 20 years of subsequent European calm.

invaded in 1914 because it was convinced that would not send enough troops to aid its overwhelmed ally, . also assumed that isolationist America would not intervene.

Unfortunately, the Allies of 1939 later repeated the errors of 1914, and the result was WWII.

currently dominates , just as it did in 1871, 1914 and 1939. European peace is maintained only when channels its enormous energy and talents into economic, not military, dominance. Yet even today, on matters such as illegal immigration, overdue loans, Brexit and trade surpluses, tends to agitate its allies.

It is also always unwise to underestimate a peaceful America. The possesses an uncanny ability to mobilize, arm and deploy. By the time America's brief 19-month foray into war ended in , it had sent 2 million soldiers to .

Had the armistice of and the ensuing peace worked, perhaps we would still refer to a single "Great War" that put an end to world wars.

But because the peace failed, we now use Roman numerals to count world wars. And few believe that when the shooting stops, the war is necessarily over.