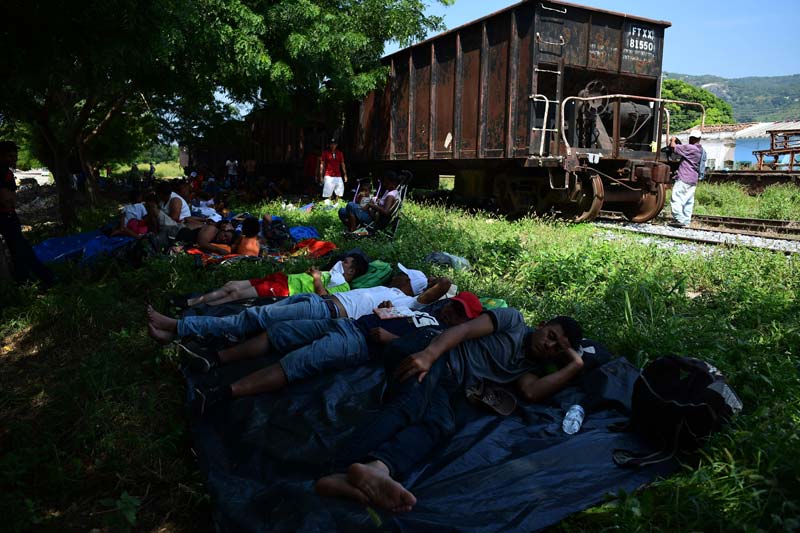 Members of a caravan of Honduran migrants rest in Arriaga, Mexico. Zuma Press

What makes citizens obey the law is not always their sterling character. Instead, fear of punishment -- the shame of arrest, fines or imprisonment -- more often makes us comply with laws. Law enforcement is not just a way to deal with individual violators but also a way to remind society at large that there can be no civilization without legality.

Or, as 17th-century British statesman famously put it: "Men are not hanged for stealing horses, but that horses may not be stolen."

In the modern world, we call such prompt, uniform and guaranteed law enforcement "deterrence," from the Latin verb meaning "to frighten away." One protester who disrupts a speech is not the problem. But if unpunished, he green-lights hundreds more like him.

Worse still, when one law is left unenforced, then all sorts of other laws are weakened.

The result of hundreds of "sanctuary cities" is not just to forbid full immigration enforcement in particular jurisdictions. They also signal that immigration law, and by extension other laws, can be ignored.


The presence of an estimated 12 million or more foreign nationals unlawfully living in the without legal consequence sends a similar message. The logical result is the current caravan of thousands of Central Americans now inching its way northward to enter the illegally.

If the border was secure, immigration laws enforced and illegal residence phased out, deterrence would be re-established and there would likely be no caravan.

Campus protests often turn violent. Agitators shout down and sometimes try to physically intimidate speakers with whom they disagree.

Most of the disruptors are upper-middle-class students. Many have invested up to $200,000 in their higher education, often to ensure well-paying careers upon graduation.

Protesters assume that ignoring laws about peaceful assembly poses no consequences. Usually student disruptors are right. College administrators will typically shrug at even violent protests rather than call police to make arrests.

Yet if a few bold disruptors were actually charged with misdemeanors or felonies and had arrests tarnishing their otherwise sterling rĂ©sumĂ©s, there would likely be far fewer illegal and violent protests.

In the last two years, a number of celebrities have openly fantasized about doing physical harm to the president of . Madonna, , , , Snoop Dogg and other stars have expressed their wishes that might be beaten up, blown up, cut up or shot up.

Their shared premise is that they are too famous, influential or wealthy to expect consequences that ordinary citizens might face for making threats to the safety of the president of . If the next time a icon tweeted or voiced a threat to the president he or she was subsequently put on a no-fly list, the current assassination chic would quickly stop.

Every person assumes the freedom to eat safely in a restaurant, to walk to work without disturbance and to relax without fear of violence. Now, that is now always the case, at least not if one is deemed politically influential and conservative.

Secretary , Sens. and , and Rep. must worry that when they venture out in public, protesters will scream in their face, attempt to bar their passage or disrupt their meal -- and do so without legal ramifications.

There are many causes of the current legal laxity.

Trump is a polarizing president, and his critics have decided that extraordinary and sometimes extralegal measures are morally justified to stop him. Supposedly high-minded ends are seen as justifying unlawful means. Helping undocumented immigrants evade the law, stopping the Supreme Court nomination of or otherwise thwarting Trump all warrant special immunity.

The problem with ignoring laws is that it is contagious -- and can boomerang.

If thousands of Hondurans in a caravan are deemed above the law, then why not exempt future mass arrivals of Chinese or South African immigrants?

If Cruz and other Republican politicos can't eat in peace, will , and soon face the same disruptions -- the illegality justified by higher moral concerns?

If students can block a right-wing speaker or storm a diner, will they also object when anti-abortion protesters bar the passage of a pro-choice campus guest?

German philosopher noted that "anarchy is law and freedom without force."

Translated to our current context, Kant might say that all our high-minded talk about the Bill of Rights means absolutely nothing without the cop on the beat and the local district attorney.