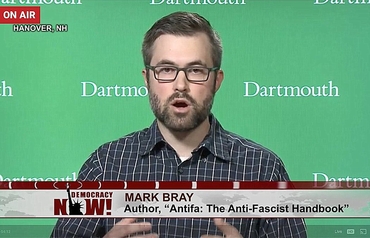 Professor Mark Bray is what passes for the intellectual wing of Antifa. You might recall that I mentioned him here:

Antifa, says Mark Bray, "have no allegiance to liberal democracy, which they believe has failed the marginalized communities they're defending." Professor Bray is a lecturer in history at GRID, the Gender Research Institute at Dartmouth, which is the usual social engineering flimflam masquerading as a field of scholarship, but it's Ivy League so it'll cost you an arm and a leg (metaphorically, I mean; not literally, like, say, attending a Charles Murray speech at Middlebury). Dartmouth College is in the town of Hanover (median family income $129,000), in the state of New Hampshire (93.9 per cent white, 1.1 per cent black). So, when it comes to "marginalizing" communities, Professor Bray knows whereof he speaks. It's so much more rewarding, don't you find, to defend marginalized communities from a safe distance: They look a lot more marginalized when they're on the far horizon, somewhere south of the Massachusetts line.

But then, viewed from the Gender Research Institute in leafy, pampering Hanover, everything's on the far horizon. I see The College Fix calls Professor Bray "a foppish son of privilege". I'm not myself foppaphobic: My old school song contained the stern injunction, "Here's no place for fop or idler", notwithstanding that, on a casual glance of the room, large numbers of both had managed to slip in. But the Fix's epithet does accurately convey the sense of no-nothing trustie-fundies winging it. Yet the Bray of Privilege is ringing throughout academe. In The Chronicle of Higher Education Nell Gluckman offers a glowing paean to the man she dubs "The Button-Down Anarchist":

Bluestockings ['a cooperatively owned bookstore in lower Manhattan'] was Mr. Bray's first appearance on a 35-stop tour to promote Antifa: The Anti-Fascist Handbook (Melville House), a book he'd never planned to write. He had researched turn-of-the-century Spanish radicalism as a doctoral student at Rutgers University at New Brunswick, and seemed well on his way to a life of teaching undergraduates and writing about modern European history. Then Donald Trump won the presidency, white nationalists rejoiced, and 20th-century European fascism was suddenly on everyone's mind.

Bluestockings, eh? In my day, bluestockings used to know things. That's what made them a turn-on. Now that last sentence is how a supposedly sophisticated "chronicle" of "higher" "education" summarizes a national election. Obviously, 20th-century European fascism wasn't "on everyone's mind"; for a start, it wasn't on the minds of the half of the country that voted for Trump, who had, like them or not, reasons of their own. But never mind that - that's just the groupthink of the American academy. What's even more of an eye-roller for us free-speech types was the essay's conclusion:

Mr. Scott has paid attention to the rising interest in antifa, and he has watched his friend [Professor Bray] on TV. He finds himself relying on Mr. Bray once again.

In fact, there's a point Mr. Bray made in an interview that Mr. Scott often finds himself citing. "We don't look back at the Weimar Republic today and celebrate them for allowing Nazis to have their free-speech rights," he says. "We look back and say, Why didn't they do something?"

It is a testament to the wholesale moronization of our culture that there are gazillions of apparently sane people willing to take out six figures of debt they'll be paying off for decades for the privilege of being "taught" by the likes of Professor Bray. The reason "we don't look back at the Weimar Republic today and celebrate them for allowing Nazis to have their free-speech rights" is because they didn't. A decade ago, as my battles with Canada's "human rights" commissions were beginning, I lost count of the number of bien-pensants insisting that, while in theory we could permit hatemongers like Steyn to exercise their free-speech rights, next thing you know it would be jackboots on the 401. As I said way back when:

"Hateful words" can lead to "unspeakable crimes." The problem with this line is that it's ahistorical twaddle, as I've pointed out. Yet still it comes up. It did last month, during my testimony to the House of Commons justice committee, when an opposition MP mused on whether it wouldn't have been better to prohibit the publication of Mein Kampf.

"That analysis sounds as if it ought to be right," I replied. "But the problem with it is that the Weimar Republicâ€”Germany for the 12 years before the Nazi party came to powerâ€”had its own version of Section 13 and equivalent laws. It was very much a kind of proto-Canada in its hate speech laws. The Nazi party had 200 prosecutions brought against it for anti-Semitic speech. At one point the state of Bavaria issued an order banning Hitler from giving public speeches."

And a fat lot of good it all did.

That's why "we don't look back at the Weimar Republic". If you're rube enough to sign up for Professor Bray's classes, here's more, from my book on free speech, Lights Out, On page 250 I write:

This argument is offered routinely: If only there'd been "reasonable limits on the expression of hatred" seventy years ago, the Holocaust might have been prevented.

There's just one teensy-weensy problem with it: pre-Nazi Germany had such "reasonable limits." Indeed, the Weimar Republic was a veritable proto-Trudeaupia. As Alan Borovoy, Canada's leading civil libertarian, put it:

"Remarkably, pre-Hitler Germany had laws very much like the Canadian anti-hate law. Moreover, those laws were enforced with some vigour. During the 15 years before Hitler came to power, there were more than 200 prosecutions based on anti-Semitic speech. And, in the opinion of the leading Jewish organization of that era, no more than 10 per cent of the cases were mishandled by the authorities. As subsequent history so painfully testifies, this type of legislation proved ineffectual on the one occasion when there was a real argument for it."

Pick almost any leading Nazi propagandist of the Weimar era: Josef Goebbels? Theodor Fritsch? Both were prosecuted for anti-Semitism. You didn't have to threaten to kill the Jews: The publication of the statement "The Jews are our misfortune" was forbidden by court order. Der Sturmer was prosecuted dozens of times and just plain seized and destroyed on another dozen occasions. Its publisher Julius Streicher was twice gaoled.

Yeah, yeah, say the Brays of the world. Goebbels, Streicher... But what about the big guy?

Inevitably, the Nazi party exploited the restrictions on "free speech" in order to boost its appeal. In 1925, the state of Bavaria issued an order banning Adolf Hitler from making any public speeches. The Nazis responded by distributing a drawing of their leader with his mouth gagged and the caption, "Of 2,000 million people in the world, one alone is forbidden to speak in Germany."

The idea that "hate speech" led to the Holocaust is seductive because it's easy: If only we ban hateful speech, then there will be no hateful acts. But, as Professor Anuj C Desai of the University of Wisconsin Law School points out, "Biased speech has been around since history began. As a logical matter, then, it is no more helpful to say that anti-Semitic speech caused the Holocaust than to say organized government caused it, or, for that matter, to say that oxygen caused it. All were necessary ingredients, but all have been present in every historical epoch in every country in the world."

Professor Desai makes a sharp point. Jew-hatred had been present to one degree or another on the Continent for millennia, but it had to wait until the twentieth century to turn genocidal, and in the most cultured society on the planet. How did that happen? You might as well argue that all those Weimar free-speech restrictions were to blame. As for demanding to know "why didn't they do something?", well, they did quite a lot - as their successors quickly appreciated. Pages 251 and 252 of my book:

The reductio ad Hitlerum is the laziest form of argument, so it's no surprise to find the defenders of the ever-more-intrusive "human rights" enforcers taking refuge in it. But it stands history on its head. Most of us have a vague understanding that Hitler used the burning of the Reichstag in February 1933 as a pretext to "seize" dictatorial powers. But, in fact, he didn't "seize" anything because he didn't need to. He merely invoked Article 48 of the Weimar Republic's constitution, allowing the state, in the interests of the greater good, to set â€” what's the phrase? â€” "reasonable limits" on freedom of the press, freedom of expression, freedom of association, freedom from unlawful search and seizure and surveillance of postal and electronic communications. The Nazis didn't invent a dictatorship out of whole cloth. They merely took advantage of the illiberal provisions of a supposedly liberal constitution.

Oh, and by the way, almost all those powers the Nazis "seized" the morning after the Reichstag fire the "human rights" commissions already have.

To repeat what the late Alan Borovoy said: "This type of legislation proved ineffectual on the one occasion when there was a real argument for it." And yet Ivy League profs seem entirely ignorant of this. And their gullible cheerleaders in Teen Beat ...whoops, The Chronicle of Higher Education don't even bother to look it up before using it as the stirring finale to their halfwit hagiography. Because, in "higher education", correct attitudes are all, no matter how tired, cheaply sentimental, and self-evidently fatuous they are.

I'm an hour or so north of Professor Bray in Hanover. If Dartmouth would like to dispatch any of its eager young minds thirsting for knowledge up the road a-ways, I'm happy to teach a course on "Free Speech in the Weimar Republic". It would be nice to think these guys had something to show for that six-figure debt.