The bike path to diversity hell 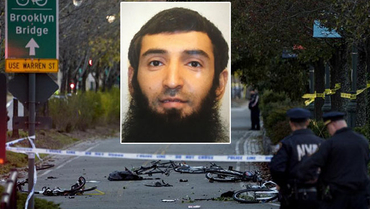 Fourteen years ago, I wrote a column for The Wall Street Journal on "The Bike-Path Left":

There was a revealing moment on MSNBC the other night. Chris Matthews asked [Howard] Dean whether Osama bin Laden should be tried in an American court or at The Hague. "I don't think it makes a lot of difference," said the governor airily. Mr. Matthews pressed once more. "It doesn't make a lot of difference to me," he said again... So how about Saddam? The Hague "suits me fine," he said, the very model of ennui. Saddam? Osama? Whatever, dude.

So what does get the Dean juices going? A few days later, the governor was on CNN and Judy Woodruff asked him about his admission that he'd left the Episcopal Church and become a Congregationalist because "I had a big fight with a local Episcopal church over the bike path." I hasten to add that, in contrast to current Anglican controversies over gay marriage in British Columbia and gay bishops in New Hampshire, this does not appear to have been a gay bike path: its orientation was not an issue; it would seem to be a rare example of a non-gay controversy in the Anglican Communion. But nevertheless it provoked Howard into "a big fight." "I was fighting to have public access to the waterfront, and we were fighting very hard in the citizens group," he told Judy Woodruff. Fighting, fighting, fighting.

And that's our pugnacious little Democrat. On Osama bin Laden, he's Mister Insouciant. But he gets mad about bike paths. Destroy the World Trade Center and he's languid and laconic and blasĂ©. Obstruct plans to convert the ravaged site into a memorial bike path and he'll hunt you down wherever you are.

The Hudson River Greenway is not, formally, a 9/11 "memorial bike path". But it does run within 300 feet or so of the World Trade Center as it begins its progress up the West Side Highway toward the Bronx. So close enough. Yet on the central point I was wrong. The "bike-path left" will surrender the bike path as they surrender everything else.

As I write, eight are dead - all men, five Argentines, one Belgian, all in the path of an Uzbek Muslim who decided to take a Home Depot pick-up truck down the bike path for 20 blocks mowing down bicycle after bicycle after bicycle before exiting the vehicle and yelling - go on, take a wild guess - "Allahu Akbar!" Well, I never! You could knock me over with a feather duster - which the Mohammedans will no doubt find a way of weaponizing any day now.

So two hours after the attack, Governor Cuomo, Mayor de Blasio and other New York bigwigs assembled for the usual press conference to give the usual passive shrug - this is the way we live now, nothing to be done about it, etc, etc. Every so often in New York, as in London as in Stockholm as in Berlin as in Nice as in Brussels as in Paris as in Manchester as in Orlando, your loved one will leave the home and never return because he went to a pop concert or a gay club or a restaurant or an airport, or just strolled the sidewalk or bicycled the bike path. "Allahu Akbar"? That's Arabic for "Nothing can be done". So Andrew Cuomo ended with some generic boilerplate about how they'll never change us:

We go forward together. And we go forward stronger than ever. We're not going to let them win...We'll go about our business. Be New Yorkers. Live your life. Don't let them change us.

But they are changing us. I've written before about what I've called the Bollardization of the Western World: the open, public areas of free cities are being fenced in by bollards, as, for example, German downtowns were after the Berlin Christmas attack, and London Bridge and Westminster Bridge were after two recent outbreaks of vehicular jihad. This is a huge windfall for bollard manufacturers - Big Bollard - and doubtless it's a huge boost for the economy, if your town's nimble enough to approve the new bollard plant on the edge of town, or if your broker is savvy enough to divest your tech stocks and go big on the bollard sector. As I write, Geraldo is on Fox demanding to know why this bike path wasn't blocked off with concrete barriers.

Why? Why does every public place have to get uglified up just because Geraldo doesn't want to address the insanity of western immigration policies that day by day advance the interests of an ideology explicitly hostile to our civilization? Instead Geraldo wants to tighten up vehicle rental. Why? Why should you have to lose an extra 15 minutes at an already sclerotic check-in counter because Hertz and Avis and UHaul have to run your name through the No-Rent list? Why should open, free societies become closed, monitored, ugly, cramped and cowering?

And Bollardization doesn't even solve the problem, does it? Last week I was tootling through Williston, Vermont, which has just reconfigured its highway system to run green-painted bike paths down the center of the streets. And the thought occurred to me that, once you've bollarded off every sidewalk, what's to stop jihadists mowing down cyclists? After all, if the eco-crowd are installing them in the middle of the roadway, they're kind of hard to bollard off. And then a second thought occurred: As inviting a target as bike paths are in enviro-poseur communities, they're even more inviting in genuine bicycling cultures such as the Netherlands or Scandinavia.

And now eight people are dead and dozens more injured - at the hands of a guy who came here in 2010 because he won a Green Card in the so-called "diversity lottery". Why was that stupid program not suspended on September 12th 2001?

Because even 3,000 dead cannot be allowed to question the virtues of "diversity". The other day, the Australian government lost its working majority because, thanks to the usual boneheaded jurists, an Aussie-born citizen who chances also to share, say, New Zealand citizenship is deemed to be ineligible to sit in Parliament.

Er, okay, whatever. But at the same time we're assured that an Uzbek or a Somali or a Yemeni becomes a fully functioning citizen of a free, pluralist society simply by setting foot on western soil. That's not so. And the price of maintaining the delusion is blood on the pavement.

And so, on a buckled, broken bicycle on the Hudson River Greenway, the wheel comes full circle. America and every other major western nation thought the appropriate response to 9/11 was to show how nice we are by dramatically increasing the rate of mass Muslim immigration. Sayfullo Habibullaevic Saipov was among the many beneficiaries of the west's suicide by virtue-signaling. "Sayfullo" is a Central Asian rendering of "Saifallah" - or "Sword of Allah". Hmm, what a fascinating name! Do you think whichever brain-dead bureaucrat who gave Sword of Allah's online Green Card application the once-over (assuming anyone did) so much as gave the name a second glance? And so, because we did not take an act of war seriously in 2001, we are relentlessly harassed and diminished by unending micro-jihad - in Copenhagen, in Toulouse, in San Bernadino, in Calgary, Barcelona, Parsons Green ...and now on a bike path 300 feet from where we came in sixteen years ago. Three months ago, on the anniversary of 9/11, I wrote:

In any war, you have to be able to prioritize: You can't win everything, so where would you rather win? Raqqa or Rotterdam? Kandahar or Cannes? Yet, whenever some guy goes Allahu Akbar on the streets of a western city, the telly pundits generally fall into one of two groups: The left say it's no big deal, and the right say this is why we need more boots on the ground in Syria or Afghanistan. Yesterday President Trump said he was committed to ensuring that terrorists "never again have a safe haven to launch attacks against our country".

By that he means "safe havens" in Afghanistan. But the reason the west's enemies are able to pile up a continuous corpse count in Paris, Nice, Berlin, Brussels, London, Manchester, Copenhagen, Stockholm, Orlando, San Bernadino, Ottawa, Sydney, Barcelona, [Your Town Here] is because they have "safe havens" in France, Germany, Britain, Scandinavia, North America, etc. Which "safe havens" are likely to prove more consequential for the developed world in the years ahead..? In Afghanistan, we're fighting for something not worth winning, and we're losing. In Europe, Islam is fighting for something very much worth winning, and they're advancing. And, according to all the official strategists in Washington and elsewhere, these two things are nothing to do with each other.

So now eight grieving families and dozens more who'll be living with horrific injuries for the rest of their lives are told by Cuomo and De Blasio and the rest of the gutless political class behind their security details that there's nothing to do except to get used to it.

I don't want to get used to it - and I reiterate my minimum demand of western politicians that I last made after the London Bridge attacks: How many more corpses need to pile up on our streets before you guys decide to stop importing more of it?

If your congressman or senator says that's not on his agenda, what he means is he's willing to sacrifice you and your loved ones in the suicide lottery of diversity.