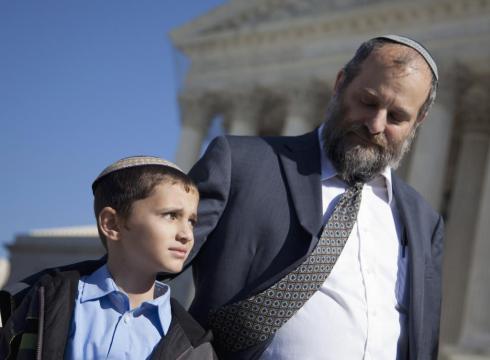 WASHINGTON — A constitutional challenge to the president's long-standing claim of exclusive power over foreign affairs comes before the Supreme Court this week wrapped in a 11-year old dispute over a single word in the passport of an American boy born in Jerusalem.

The justices will hear arguments Monday over one of former President George W. Bush's "signing statements" in a case that could decide when, if ever, the nation's chief executive may ignore a law passed by Congress.

The outcome may further cramp President Barack Obama if he faces a Republican-controlled Congress next year and could limit the power of future presidents as well.

"Many presidents over many decades have claimed exclusive power in signing statements involving national defense, the intelligence agencies and the State Department," said Charles Tiefer, a University of Baltimore law professor. "This case has the potential to change that."

The case began in October 2002 when Menachem Zivotofsky was born in Jerusalem to American parents. They asked the U.S. consulate to list Israel as his birthplace. Officials refused, citing the State Department's policy of neutrality toward the status of Jerusalem, which Palestinians also claim as their capital.

A month before the boy's birth, however, Congress had passed the Foreign Relations Authorization Act, which included a provision giving U.S. parents of children born in Jerusalem a right to have the child's place of birth recorded as Israel on his passport.

For this Jewish family and many others, "there's a strong emotional sense of identification with Israel, and they would like that to be recognized on their son's passport," said Alyza Lewin, a Washington lawyer who is representing the parents.

But upon signing the bill into law, Bush issued a statement saying he would not abide by the passport provision. It "impermissibly interferes with the president's constitutional authority to conduct the nation's foreign affairs and to supervise the unitary executive branch," he wrote.

Throughout American history, presidents have attached signing statements to legislation they approve, usually to clarify how they would enforce the new law.

But Bush's frequent use of such statements drew fire from critics who said he was relying on them as a kind of line-item veto to nullify provisions passed by Congress that he believed infringed on presidential authority. They usually involved matters of foreign policy or national security, such as the treatment of prisoners at Guantanamo Bay and at secret prisons around the world.

For example, when Congress passed a 2005 law to say no prisoner "shall be subject to cruel, inhuman or degrading treatment," Bush issued a signing statement saying this provision interfered with his presidential powers.

His use of signing statements rankled liberals, including then-Sen. Barack Obama, who complained of unchecked executive power.

But now in the pending Supreme Court case, Obama's lawyers are defending Bush's claim that only the president, not Congress, may decide a sensitive foreign policy matter like the status of Jerusalem.

"The president has exclusive authority to recognize foreign governments...as well as their territorial limits," they argue in their brief to the Supreme Court. Congress has no authority, they write, to "override the executive branch's decades-long policy of neutrality with respect to the sovereignty over Jerusalem" — or to grant parents' wish that their boy's passport says he was born in Israel.


Although Israel has controlled all of Jerusalem since the 1967 Middle East war, the U.S. and most other nations do not recognize its annexation of the eastern part of the city. The U.S. embassy is located in Tel Aviv.

The boy's parents filed a suit against the secretary of State for not following the law and its passport provision. Their case has bounced around for years. One judge initially ruled that the parents had no standing, but an appeals court disagreed. Then the appeals court said this was a "political question" beyond the power of the courts. The Supreme Court disagreed three years ago and sent the case back for a decision.

Last year, the court of appeals in Washington, D.C., ruled against the parents and said the passport provision passed by Congress was an "unconstitutional intrusion" on the powers of the president and his secretary of state.

The Supreme Court voted to hear the parents' appeal in Zivotofsky vs. Kerry.

In the new case, the court could rule narrowly on passports, or make clear more broadly that the president must abide by restrictions that Congress writes into law.

If so, the ruling could have an impact soon if Republicans win full control of Congress.

"Imagine if Congress were to pass an extreme Ebola quarantine provision or an extreme restriction on the National Security Agency," Tiefer said.

Obama could veto such a bill, but he also could be obliged to sign it if it contained other important legislation. If so, Tiefer said, "the president could find his power curbed, and he would have to accept Congress' power to set the rules."