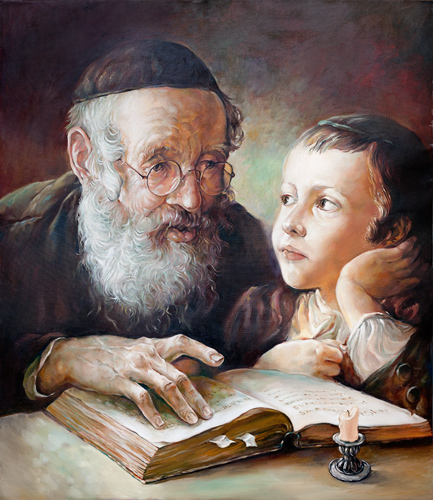 Veteran readers of this column are familiar with my paternal grandfather, Chaim Yitzchak Weinreb. He was an old-school Jew, with roots in the region of eastern Poland known as Galicia. He had studied under renowned Talmudists back in the Old Country, and his fervent wish was to see his grandchildren grow up to be dedicated Talmud students.

I was his oldest grandchild and discovered from a very early age just how determined he was to steer me in what he was convinced was the right direction. I particularly remember the time he visited my parents' home when I was in the seventh or eighth grade. I had just received my report card and proudly showed it to him. I felt it was a pretty good report card, but for him, anything less than perfection was inadequate. After one glance, he noticed just how uneven my academic performance was.

He spoke to me in Yiddish, unadulterated by English phrases — pure, old-fashioned Yiddish. He protested that my grades were spotty. "You did very well in Chumash, Bible, but not nearly as good in Talmud. How can one truly know the Bible if he is ignorant of Talmud?"

I responded defensively by saying that I saw no connection between the Bible portions of Genesis that we were then studying and the tractate of Bava Metzia, our Talmud text that year. "The Chumash is full of great stories, but the Talmud is only about legal arguments, some of which are over my head."

He smiled and said that if I would give him an hour on the upcoming Friday night, he would give me kugel and soda, teach me a song, and demonstrate how the Talmud elucidates the Bible, in an "amazing" way. Only he didn't say "amazing," he said "vunderbar."

That Friday, true to his word, and he was always true to his word, he personally served me the kugel and soda, taught me a song that he had learned from the old rabbi of his now-extinct shtetl, and asked me to review with him a short passage in this week's Torah portion, Toldos (Genesis 25:19-28:9).

You know the story. Esau, the older brother, comes in from the field, famished. He finds his younger brother, Jacob, cooking a pot of stew and asks for some of it. Jacob is willing to give it to him, but for a price. He demands that Esau first sell him his birthright; that is, the material and spiritual privileges that come with being the first-born. Translated literally, he says: "Sell me your birthright, kayom, like today!"

Whereas nowadays, kids will call their elderly grandfather Zaidie or Saba, we called ours Grandpa. Despite his old-fashioned demeanor, in many ways he was as American as apple pie. He asked me if I found anything problematic with the story.

I did. "The phrase 'kayom' seems strange, Grandpa. Why does Jacob insist that the sale should be 'like today?'"

He responded, "Good! Maybe you have a Gemara kopp [a Talmudic intellect] after all! But let's see if you can ask a question on the whole transaction based on the Talmud texts you are now studying in school. Here's your volume of Talmud. I'll give you ten minutes to come up with a really good question."

To say that I was frustrated would be putting it mildly. Not only was I going to be stuck studying all Friday night—I was actually being asked to think!

But one did not say no to Grandpa. So I opened the large book, pored over it and focused on the task with great concentration. I was searching for a connection between a fascinating story and what I then experienced as some very boring rules and regulations.

After some time, probably much more than the allotted ten minutes, I had an "aha" experience. I really got excited.

"Grandpa! It can't be! How could Jacob purchase the birthright from Esau? The privileges of the birthright are way off in the future. They include privileges like a dual portion of their inheritance of their father Isaac's estate, and Isaac was alive, if not entirely well, at that time. We studied in the Talmud that one cannot buy or sell objects or privileges which do not yet exist!"

My grandfather was thrilled, but no more than I was. Finally, I saw a connection between my Bible stories and the legal terminology of the Talmud that I had begun to resent.

He then sat back, asked me to relax, and took the role of the teacher. "If you reached page 16 of the tractate you are studying, you know this scenario. A fisherman wishes to sell the fish he will catch that day to a customer. He doesn't have the fish yet. Can he sell them? Yes, answers the Talmud. He can sell them if he desperately needs the money to feed himself that day. But if he wishes to sell the fish he will catch in thirty days or in a year, he cannot do that. If one is desperate, he can sell even objects that he does not yet possess, even fish that are still in the sea."

There is a logical rationale for this legal principle, which I will omit from this column in the interest of brevity. Suffice it to say that I now saw the connection between the story and the Talmudic principle:

"Of course Jacob said kayom. Sell me your birthright even though its privileges will not be realized until the distant future, but do so in your current state of desperation. Do so because you are famished, and in your desperation have the legal ability, much like the fisherman, to sell something which is now non-existent, because you need it for your urgent immediate needs. Sell me the birthright kayom."

Grandpa was proud of me that day, but I was even prouder of myself. He told me that the concept that I had discovered on my own was to be found in the commentary Ohr HaChaim, which he studied assiduously every Friday night.

He then leaned back, stared at me with his gentle blue eyes and said, "I am trying to think of a prize, a reward for your willingness to sit with me for a few hours on a Friday night, for exerting your young intellect, and for seeing the connection between the Written Torah, Scripture, and Oral Torah, Talmud."

I sat there imagining all sorts of possible rewards, certain that he would ask for my input. Kugel and soda would have been acceptable, but lowest on my list of suggestions. I was thinking big bucks, or at least tickets to a baseball game.

Then he told me his idea. "From now on, every time I visit you, we will study together. And we will make it our business to discover connections. Our motto will be the verse in Psalms that says that His Torah is perfect, soothes the soul and brings joy to the heart."

What a disappointment for a twelve-yea- old. But today, many decades later, each time I sit down before a folio of Talmud, I experience Grandpa's reward. I can now appreciate Grandpa's willingness to risk his popularity with his grandchildren, instead using every means at his disposal to get us to sit and learn with him.