A 'Palestinian' pogrom in Jerusalem 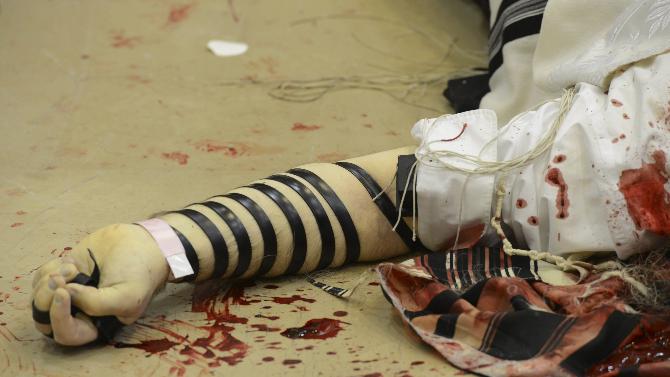 Still dressed in prayer shawl (tallis) and tefillin (prayer gear), a corpse lays in a drying pool of his own blood.

Armed with guns, knives and a meat cleaver, our “partners in peace” shot, slashed and stabbed their victims, leaving pools of blood and horror in their wake, before being eliminated by the police.

It is difficult to conceive of a more despicable deed.

This act of Palestinian brutality was so heinous that even Israelis hardened by decades of terror responded with disbelief. Indeed, anyone still thinking of giving the Palestinians a state should take a long, hard look at the disturbing photos of the synagogue slaughter that are circulating online.

In one such picture, a Jewish man lies dead on the synagogue floor, wrapped in his tallit and tefillin and surrounded by blood stains, evoking scenes reminiscent of the days when the Cossacks massacred our people. It is a startling and distressing testimony to the savagery of our foes, to the bestial depths of inhumanity to which the Palestinians are willing to descend in their war against the Jewish state.

After all, what kind of human being wakes up in the morning, grabs a few weapons, and then walks into a house of prayer intent on maiming and murdering innocent people? Guns were not sufficient for these savages. They employed axes and knives, which are far more intimate and bloody weapons, the kind that require physical contact with the victim rather than the less personal act of pulling a trigger.

If it is possible for a person to strip away the Divine image with which he was created, then the Palestinian terrorists who perpetrated this attack have surely succeeded in doing so.

Is it therefore any surprise that two Palestinians went ahead and attacked a synagogue? Shortly after the incident came to an end, Public Security Minister Yitzhak Aharonovitch went before reporters and sounded like a broken record, repeating the same empty promises he has made after previous attacks, insisting that we will prevail even as he failed to offer any substantive ideas as to how that will happen.

Frankly, I am tired of the meaningless mantras and barren babble of many of our politicians. The time for tough talk is over. Now is the time for tough action, for measures that will change the course of events and punish those behind this evil deed.

For G0D’s sake, Jerusalem, Israel’s capital, is under attack. Stabbings, stonings, premeditated vehicular attacks, rioting on the Temple Mount and now an assault on a synagogue.

The only way to stop this spiral of violence from spinning further out of control is to go to the source, to the root of the problem.

Simply put, it is time to topple the Palestinian Authority (PA ) and declare to the world once and for all: there will never be a Palestinian state in Judea and Samaria.

Abbas, like his predecessor Yasser Arafat, has used the PA as a springboard to attack Israel in international forums abroad while fomenting anti-Jewish violence here at home. It is the PA that is leading the charge to demonize and delegitimize Israel even as it encourages terrorism against the Jewish state.

Throughout the years, the Palestinians have proven again and again that they do not want peace, are not interested in it and prefer to resort to violence to achieve their aims. How much longer must we tolerate acts of barbarism and terror? For the sake of Israel’s future, we cannot and must not allow a hostile terrorist entity to continue to exist in Judea and Samaria. Ever since it was established in 1994, the PA has been a poisonous thorn in Israel’s side. Rather than bringing peace to the region, it has incessantly promoted violence and bloodshed. The PA long ago outlived any usefulness that some may have hoped it would serve. It should be demolished forthwith and Israel should assert full control over the area.

Will there be a heavy price to pay diplomatically? Certainly. And will it be difficult to implement? Absolutely. But a government’s primary responsibility is to protect its people and ward off threats to their security and well-being. And the Palestinian Authority has shown once again that it is truly such a threat.

So let’s stop appeasing the terrorists and start opposing them. The blood of our brothers, of our fellow Jews, is crying out to us from the Kehillat Yaakov synagogue in Jerusalem, and from all the other sites of Palestinian terrorism over the past two decades. Let us finally heed their cry and prevent further suffering by dismantling the Palestinian terrorist entity once and for all.

Michael Freund served as Deputy Director of Communications & Policy Planning in the Israeli Prime Minister's Office under premier Benjamin Netanyahu. A native of New York, he holds an MBA in Finance from Columbia University and a BA from the Woodrow Wilson School of Public and International Affairs at Princeton University.