The Last Copier in the Woods Arrives Sooner than Expected 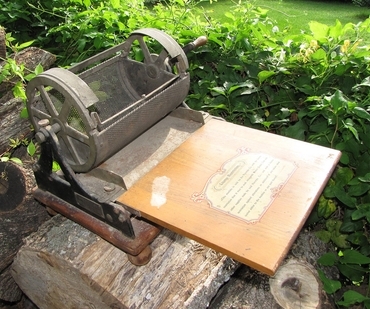 If anybody is around to write history in a generation or two, October 14th 2020 will go down as the first day of a new Year Zero. With less than three weeks to go in a national election in a settled democratic society with an ostensibly free press, the woke billionaires of the social media cartel decided to freeze and/or cancel the Twitter/Facebook accounts of the President's press secretary, the Trump campaign, Republican Senate candidates and Republican House members.

So America is now formally a one-party state, at least as far as fair access to media platforms is concerned. In old-school "people's republics", the dictator keeps the opposition party off the air. In the subtler version operated by social media, woke dictators of a nominally two-party state are now openly keeping one of those two parties off your telephones and tablets. Wanker conservatives of the lemming right wonder if this might be, ooh, a "campaign-finance violation". Hey, yeah, maybe John Durham can do that for his next any-day-now investigation-without-end.

Meanwhile, tonight was supposed to be the second presidential debate, subsequently canceled when Trump balked at the official "debate commission"'s unilateral tearing up of the agreed format. The man who would have moderated that debate, Steve Scully, was today indefinitely suspended by C-SPAN after admitting he lied when he said that an accidentally revealing tweet was the result of his account being hacked. (I go back a long way with Mr Scully.) His lie had been not merely accepted but enthusiastically promoted by members of the Blue Cheka, including Clinton flack Joe Lockhart, The Washington Post's Karen Tumulty, and of course the frauds of the "Presidential Debate Commission". Yet they remain "safe" sources of news at Twitter.

As recently as two years ago, tweeter-in-chief Jack Dorsey felt it politick to dissemble, at least before the US Congress:

I want to start by making something clear: we don't consider political viewpoints, perspectives, or party affiliation in any of our policies or enforcement decisions. Period. Impartiality is our guiding principle... Twitter will always default to open and free exchange.

But Election Day looms and the mask of 2018 is cast aside. Richard Malaby, a First Week Founding Member of The Mark Steyn Club from my own dear state of New Hampshire, writes:

So, ACB uses a benign phrase, ("sexual preference"), which had hitherto been used by politicians of all stripes, the Democrats decide to weaponize it against her, and Merriam-Webster immediately redefines "preference" to make it an offensive term. Within 24 hours, the NY Post has the smoking gun on Hunter Biden and his dealings in Ukraine, their story and pictures are shared over social media, and within an hour or two Big Tech shuts it all down including locking the White House press secretary out of her account. Absolutely repulsive. If Facebook/Twitter, social media, mainstream media, and so on are working this hard to protect a potential Biden administration, imagine what will happen if he wins.

Indeed. I've said as much here and on Rush and Tucker for months now - that, if Biden prevails on November 3rd, on November 4th things are going to head south very quickly. In the early years of this century, I found myself forced to fight free-speech battles, and succeeded (eventually) in getting the relevant Canadian hate-speech law repealed. That was a real victory, but it would not have been possible had Big Social had the hammerlock on the Internet that it does today. A decade or so back, we were able to change public opinion because individual bloggers linked to my columns and speeches and media appearances on the subject. Today, those bloggers are almost all gone, and instead of individual websites their successors have Facebook/Twitter/Instagram/YouTube accounts - and, as Dorsey and Zuckerberg made plain yesterday, if you link to unapproved content, they'll shut you down.

Thus the woke cartel launched its Big Social For Biden campaign, put its thumb on the scale, and silenced, among others, Kayly McEnany and Delaware senate candidate Lauren Witzke. As a result, Jack Dorsey is now being threatened with a Congressional subpoena. How scared is he? This morning, after yesterday's furore, he doubled down. Having banned the New York Post story on the Bidens' corruption, Twitter then aggressively promoted and trended a Washington Post story supposedly demolishing it:

What you need to know

Biden did not push out a Ukrainian prosecutor investigating his son, The Washington Post confirms.

So you don't need to see the original New York Post story because there's nothing to see: Jack Dorsey has "confirmed" that the charge that Biden got the Ukrainian prosecutor fired is "misinformation" - even though Biden himself is on tape bragging about it:

There is no dispute of the central fact that Biden got the prosecutor fired. But on Twitter that fact is "misinformation", and so has to be banned. Also banned from Twitter are pictures of Hunter Biden relaxing with his crack pipe: 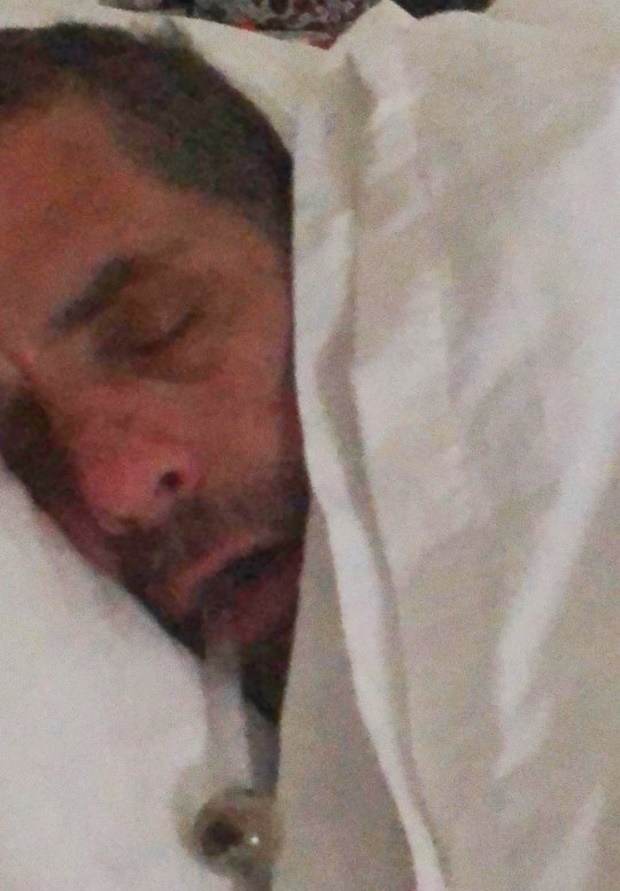 So you're free to see the photo below of Bathtime for Bozo ...but only in London's Daily Mail, not on platforms from the Land of the First Amendment: 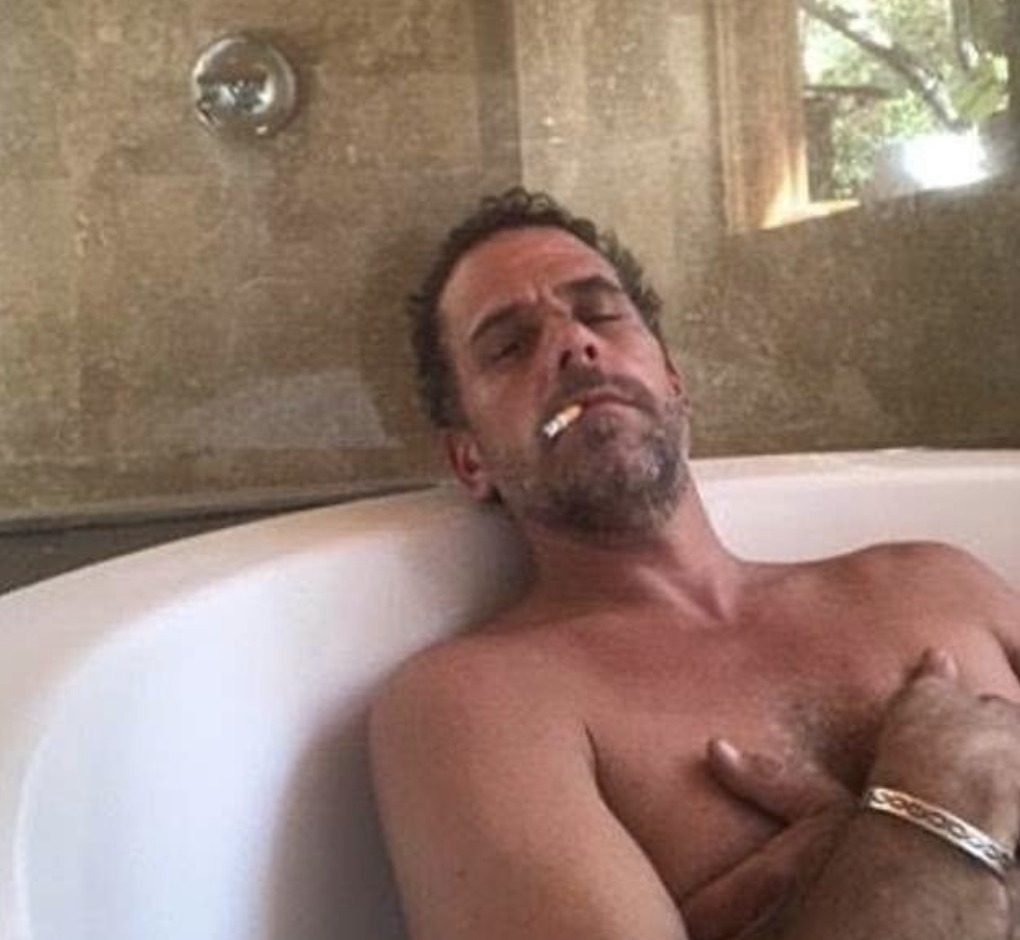 I've been consistent on this for years now. Facebook & Co have more power than Standard Oil did over a century ago - and they control a more basic resource: not fuel, but knowledge. Break them up, while you can - before Zuckerberg and Dorsey control the world with their friends on the Chinese Politburo. Oh, relax, they'll still graciously consent once in a while to meet with certain approved representatives of the people:

I describe them as five or six woke billionaires who basically control access to information for all seven billion people on this planet and when I see that picture of Justin, Theresa May, Jacinda Ardern, M Macron, sitting across the table from the woke billionaires - oh isn't that nice, they're going to rid the world of all the hate - I believe it is like the Spectre board meeting in any James Bond movie anybody's ever seen. These are guys controlling the planet and making plans for the rest of you.

Surely Conservative Inc has something to say about this? Well, if you're wondering why so many of those DC think-tanks you've donated to over the years stayed silent all day yesterday, unfortunately for you Facebook and Google made bigger donations and bought their silence on the subject.

And then there are those "conservatives" you don't need to buy: the wankercons who begin their remarks on the woke cartel with what they evidently regard as the greatest insight in the world - "Ah, but the First Amendment only prohibits government suppression of speech, and Facebook/Google/Twitter are private companies..." So what? I've been in a First Amendment case for eight years now, so you can imagine how I feel about it. What matters more is the broader culture of free speech - and yesterday Dorsey and Zuckerberg just announced to the planet that they're in charge of that. They have learned well from their Chinese business partners.

What's next? And by "next" I mean Wednesday November 4th. Look for more woke pressure on website registrars and banks and credit card companies to cease doing business with Breitbart and Daily Caller and, well, me:

A couple of years back I used a phrase, not entirely in jest, on one of our Clubland Q&As with reference to the death of the big, messy, sprawling, decentralized internet of the turn of the century that I miss so much since it was replaced by a tyranny of ever more doctrinaire and capricious thought commissars. And I said that one day we'll be disseminating SteynOnline via the last rusting Xerox machine in the woods. Well, the day of the last rusting photocopier in the woods is heading towards us very fast.

Eight years ago conservatives blew $1 billion trying to drag Mitt Romney across the finish line so that he could become president and spend the next four years screwing us over. Imagine what that billion dollars could've done starting an alternative to PayPal or Facebook...

If Lindsey Graham and Martha McSally and the Republican Senate survive on November 3rd, so be it. But those of us who've expended our energies dragging this useless political party across the finish line every two years need to get serious about redeploying our fast depleting resources into fighting on the turf that matters. We are well past the eleventh hour.