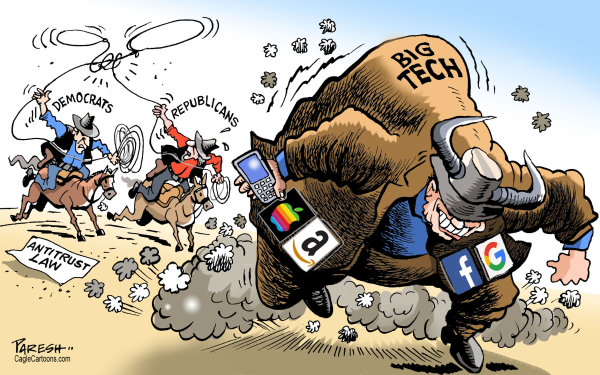 Central to this discussion is Section 230 of the Communication Decency Act. Big Tech is eager to keep this measure's protections against litigation. If so, they need to behave like platforms, much as AT&T evenhandedly carries phone calls from liberals, conservatives, and even monarchists.

If Big Tech so acted, they could keep their anti-lawsuit immunity, and deservedly so.

Alternatively, Big Tech could decide to be publishers — think Mother Jones on the Left and National Review on the Right. Then they could proliferate ideas with which they agree and block those with which they differ. As private entities, this would be perfectly appropriate, as the First Amendment applies only to government.

But if Big Tech firms pick this latter path, then they must surrender Section 230's protections and lawsuit payouts when they injure organizations and individuals, as CNN did when it defamed Nick Sandmann and his fellow students in the Covington High School fiasco.

Senator Ted Cruz (R - Texas) addressed Twitter's clampdown on the account of the New York Post — America's oldest and fourth most-widely circulated newspaper, founded by Alexander Hamilton in 1801. Twitter has blocked posts from the Post since its game-changing October 15 expose on Hunter Biden, the contents of his highly incriminating laptop, and disturbing details about Joe Biden and his family's apparent global, pay-to-play empire.

Committee Democrats uniformly dismissed the Post's exclusive as "Russian disinformation." If it is, then Democrats should explain why Hunter Biden's attorney George Mesires contacted a Wilmington, Delaware computer-repair shop and inquired about his client's laptop. If you were innocent of homicide, would you dispatch your lawyer to a crime scene to seek a murder weapon you never wielded?

On this matter, Cruz subjected Twitter CEO Jack Dorsey to a Weber-like grilling: "Mr. Dorsey, who the hell elected you and put you in charge of what the media are allowed to report and what the American people are allowed to hear, and why do you persist in behaving as a Democratic super PAC silencing views to the contrary of your political beliefs?"

"We're not doing that," Dorsey meekly replied, his listless voice muffled by a beard that far exceeded any standard of human decency. Dorsey conceded: "We realize, we need to earn trust more."

Senator Josh Hawley (R - Missouri) has sponsored legislation that would expose Big Tech companies to lawsuits filed by those whom they have harmed, as the New York Post's legal department easily could prove that it was. While Hawley's instincts are correct, he proposes a fine of just $5,000 or actual damages, if higher, plus attorney's fees.

Alas, $5,000 is probably a fraction of the daily sashimi budget in Twitter's commissary. Hawley should boost his paltry fine to something that would shake even mega-billionaires like Zuckerberg: $1 million per offense. Much like President Trump's tariffs against China, such blunt-instrument trauma might seize Big Tech's attention and teach them some manners.

There is a less-intrusive remedy. Washington simply should require Big Tech to make a Big Choice. Each company that Section 230 now shields must decide: Are you a platform or a publisher? Platforms would continue to enjoy the safe harbor of Section 230.