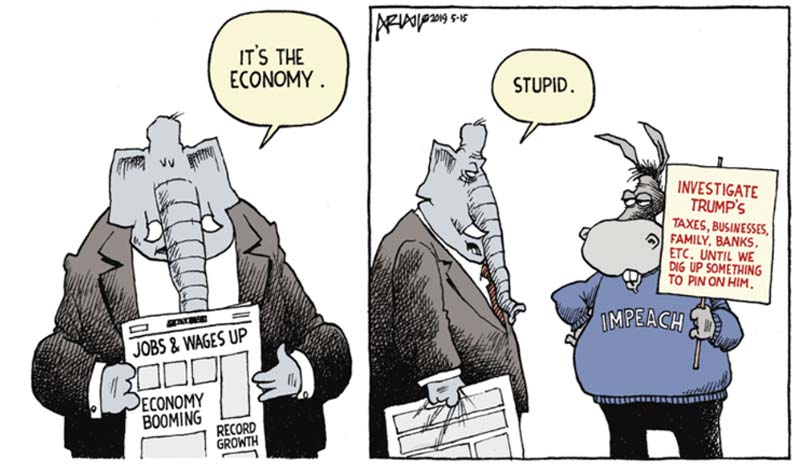 At last week's rambunctious televised debate in Cleveland, former Vice President Joe Biden said this about President Donald J. Trump: "We handed him a booming economy. He blew it."

Not so fast, Sleepy Joe.

In fact, rather than "booming," Biden and Obama bequeathed President Trump an economy that resembled a dehydrated garden. It was alive, but drooping. Obama-Biden's recovery from the Great Recession was the most parched since the Great Depression.

The president treated the garden with Trumponomics: He irrigated it with the GOP's Tax Cuts and Jobs Act (which every Congressional Democrat opposed). He fertilized it with robust deregulation that killed eight old rules for every new one imposed. And he serenaded it with a pro-enterprise tone. Job creators welcomed Trump's words of gratitude and encouragement rather than the threats, class-warfare hectoring, and success shaming of Barack "You didn't build that!" Obama.

• Real median income accelerated last year by 7.1 percent for Hispanics, 7.9 percent for blacks, and 10.6 percent for those of Asian descent. These gains occurred while these communities enjoyed the lowest jobless rates in American history.

• Leftists who complained non-stop about "income inequality" have gone silent; their favorite adult toy is broken. Under their despised "Donald Trump," the Gini Coefficient of income inequality has fallen two consecutive years. Between 2017 and 2019, it slipped from 0.49 to 0.48. Under Obama-Biden, Gini crept up from 0.47 to 0.48. On Trump's watch, the income gap has narrowed largely as it should: by enriching the poor much more than impoverishing the rich.

• These achievements all shoved America's poverty rate down, from 11.8 percent in 2018 to 10.5 percent in 2019 — an all-time low. This largest reduction in 50 years liberated some 4 million Americans from poverty.

While the overall poverty rate tumbled 1.3 percent, it dropped 1.8 percent last year for Hispanics and 2.8 percent among those of Asian heritage. Thanks to a 2.0 percent decrease for blacks, the White House observed, "the black poverty rate fell below 20 percent for the first time in history."

• February's 3.5 percent jobless rate shot to 14.7 in April and plummeted to 7.9 percent in September, far beyond the rosiest forecasts. Obama-Biden needed two years and two month to cut unemployment from 10.0 percent in October 2009 to 8.5 percent in December 2011. Trump outdid this in one month, from 10.2 in July to 8.4 in August. Even while hobbled by the China virus, President Trump's economy has produced 11.4 million jobs — roughly half of those killed by these germs.

• After looking as if they were sprayed with Agent Orange, the financial markets now mirror a jungle. The Dow Jones, NASDAQ, and S&P500 indices all have approached or exceeded their pre-COVID-19 peaks. This is great news for Americans with 401Ks and IRAs.

Voters must choose a gardener: The quiet, ponderous one who left the garden dry or the loud, impulsive one who made it grow, grow, grow.