The predators and the prey 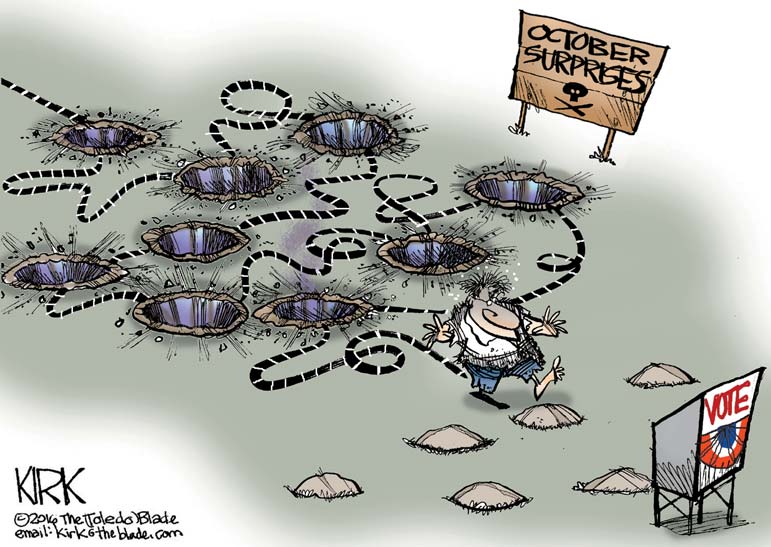 The New York Times doesn't play dirty because that's beneath its status as one of the world's best newspapers, and so I will merely say that a recent story on President Donald Trump's taxes walked through a mud puddle. Just days before a debate with Joe Biden, we learned that Trump had paid very little and sometimes nothing in taxes, hardly something entirely new and hardly illegal. The Times printed pretty much the same story in 2016 and Hillary Clinton raised the point in a debate with Trump the same year.

Clinton only knew about one instance, but thought there were others. Trump did not cringe and hide. "That makes me smart," he whispered, and in a way it does. Trump has a basketful of businesses and sometimes some lose millions in a year while others make millions. If the losses are greater than the gains, his income is either zero or punishing debt. If your income in a given year was zero, would you rush to pay income taxes anyway?

In Trump's case it can get very complicated, which is why he hires tax and finance experts to figure out what's what. The Times explains all of this but does emphasize that this man, supposedly worth billions, lives in tax heaven, and you know where the anti-Trump imagination wanders. "In 2016 & 17, I paid thousands of dollars a year in taxes as a bartender," said Rep. Alexandria Octavia-Cortez. "Trump paid $750." She moans, groans and adds that Trump is "a walking scam."

This is the expected and, in fact, widely spread reaction, and I wish someone would inform her and others of her ilk that, if business owners do not take care of their financial issues, they go out of business, bartenders and other employees suffer, communities suffer and, during the days leading up to goodbye, prices will go up. Another negative for Trump in these revelations, as the Times says, is learning that he is probably not so rich as we were told and is just maybe a lousy businessman truly in danger of losing his empire.

New or not, the joyful account tends to degrade a reputation already battered to the point of being six feet under even if, and I have to say there is another issue of true dismay. As the king of the "The Apprentice" reality TV show, Trump had his hair cut at the cost of $70,000 a year and wrote if off as a business expense. But there is no evidence of crime in any of this, the Times concedes, although the newspaper probably received this information from people who did break the law. Printing someone's private tax records in such circumstances is a bad deed in and of itself, and, then, look at the timing, at the election just weeks away, at the first debate carried out the day after the story.

Even if it did not happen in October, this is what is called an October surprise, news meant to affect an election. The Times remains an exceptional paper in some ways but, especially with the election of Trump, objectivity has been treated like a bad joke and we daily are treated to bias pretending to be truth. On a front page converted to an editorial page, Trump gets daily bombs when a grenade would have been sufficient, or maybe even a softball.

It's not just the Times, of course, that drops these bombs. The worst one was the fraudulent Mueller investigation aiming to illegitimately unseat a legitimately elected president, and have you ever seen more derogatory books about a president than we have been showered with lately? As for the Times, I would bet the October surprises are not through yet.