Whatever happened to the Palestinian 'diplomatic tsunami'? 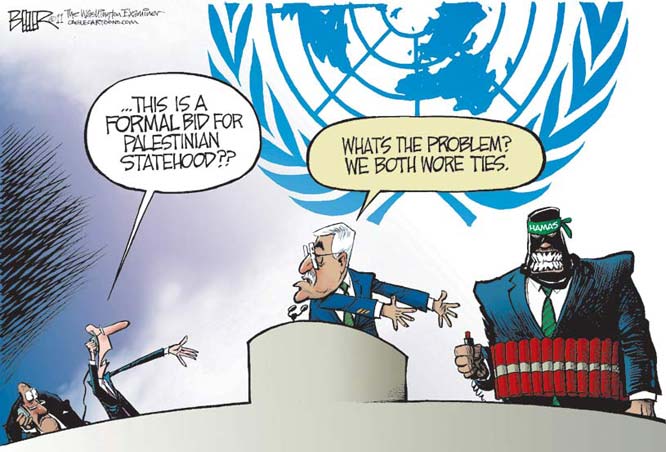 It was only eight years ago that supporters of Israel were trembling at the possibility that support for the Jewish state would soon be washed away by a ādiplomatic tsunami" that would be unleashed by the Palestinians at the United Nations.

In the spring of 2011, President Barack Obama demanded that Israel negotiate the creation of an independent Palestinian state based on the 1967 armistice lines. The Palestinian Authority chose not to embrace Obama's initiative, but instead embarked on a campaign to get the United Nations to recognize their statehood without first requiring them to make peace with Israel. Figures such as then Defense Minister Ehud Barak predicted that such a ātsunami" meant āIsrael's delegitimization was in sight." For Barak and others who still believed in the Oslo peace process even after its collapse a decade earlier in the violence of the Second Intifada, the prospect of such total international isolation meant that Israel had no choice but to withdraw from the West Bank and part of Jerusalem, regardless of the consequences.

Eight years later, no one speaks of a Palestinian tsunami at the United Nations — or anywhere else, for that matter. Instead, the only places where efforts to delegitimize Israel seem to be succeeding is on the social-media pages of pop stars. While Palestinian Authority leader Mahmoud Abbas's annual sojourn to the United Nations last month was greeted with yawns, the only recent success that haters of Israel can claim was the bullying this week of singer Demi Lovato.

Lovato is a former Disney teen star who has had some subsequent success as a singer and actress after dealing with substance-abuse problems. Like most of those who work in the entertainment industry, she is eager to identify with causes such as gay rights and gun control. But she experienced a nasty backlash when she posted pictures on her Instagram account of a trip to Israel that she had initially described as āabsolutely magical."

On a trip that was reportedly paid for by an unnamed pro-Israel nonprofit group, Lovato gushed on Instagram about her feelings about visiting Yad Vashem and the Western Wall, as well as her experience of being baptized in the Jordan River. But after BDS supporters — advocating their belief that the Jewish state be eliminated — criticized her for the visit, Lovato backed down right away. She issued an apology for thinking that traveling to the Holy Land could be a āspiritual experience," rather than a political one that supposedly signified support for hurting Palestinians.

When she became the object of further scorn for those absurd remarks, the apparently deeply confused singer then deleted her apology. Perhaps the BDS movement will count this as something of a victory. But looking back to an August concert in Israel by Jennifer Lopez (a far bigger star than Lovato), who performed to a crowd of 60,000 without worrying about what a few radicals who post comments on social media might say, it's hard to count even the leftist-dominated precincts of pop culture as a place where the Palestinians are really succeeding.

At the United Nations, where once-hardened ex-generals like Barak quaked about the prospect of the world uniting to force Israel to accept a Palestinian state, the situation for the Jewish state's foes is particularly dismal.

It's true that many U.N. agencies, like its Human Rights Council, are still cesspools of anti-Semitism and hypocrisy, focusing almost exclusively on bogus attacks on Israel while ignoring real human-rights catastrophes in countries around the world.

But, as is the case elsewhere, the diplomatic isolation that Barak and so many others feared never happened. Indeed, as Israeli Ambassador to the United Nations Danny Danon recently wrote in JNS, the world body is no longer the āhome court" for those who oppose Israel. The majority of member states joined the United States and Israel in condemning Hamas terrorism in the past year. In a variety of steps, both large and small, Israel's presence there has become normalized.

At the same time, the Palestinians have become more of an afterthought. It's probably better for Abbas that even the Palestinians' usual cheerleaders on the left paid no attention to his recent address at the U.N. General Assembly, where he spoke of his devotion to democracy and his plans for having another election. Abbas is so devoted to democracy that he is currently serving in the 15th year of the four-year term as president of the P.A., to which he was elected in 2005. No one takes his talk of finally holding another vote seriously since there is no way he would risk being defeated by his more radical Islamist rivals in Hamas who currently rule Gaza.

The Arab and Muslim worlds may still be hotbeds of anti-Semitism and have successfully exported their Jew-hatred to the West in the form of the BDS movement. However, the Arab states have effectively dropped the Palestinian cause as a priority and instead are increasingly looking to Israel as an ally against Iran. Though they still pay some lip service to the Palestinian cause, the governments of Saudi Arabia, Jordan and Egypt have little interest in creating another failed and unstable Arab state for the Palestinians.

To note these facts is not to deny that the ongoing conflict with the Palestinians is not going away and remains a serious problem. But as long as both the P.A. and Hamas are still stuck in the mindset of their century-long war on Zionism, peace will have to wait until the Palestinians are ready to accept the legitimacy of a Jewish state.

The fact that the ātsunami" that so many Jews feared has fizzled into the BDS flop that can only intimidate someone like Lovato demonstrates that the conventional wisdom peddled by Israel's noisy critics shouldn't be taken seriously. Those who listen to the counsels of despair in 2011 have turned out to be as confused as a second-tier pop star.