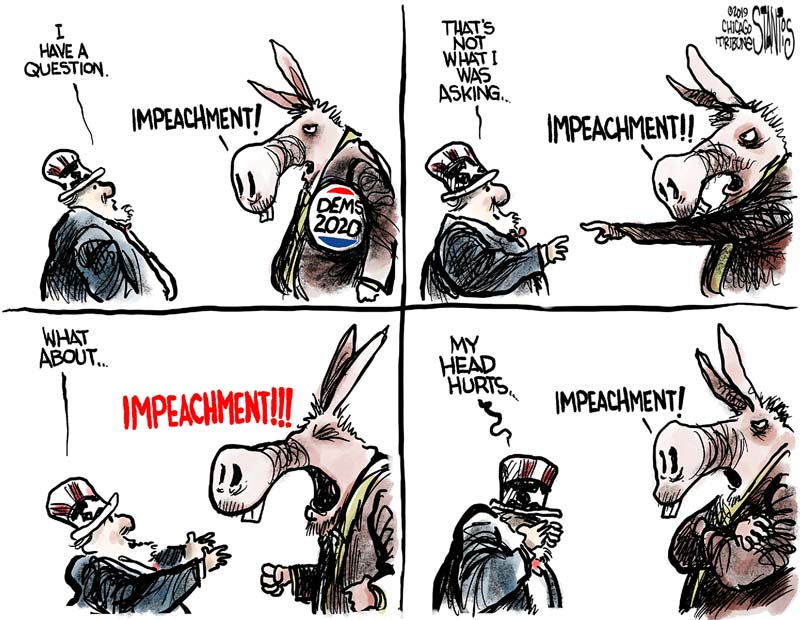 “This is deadly serious,” the House Speaker said Tuesday, regarding impeachment proceedings against President Donald J. Trump. Too bad Pelosi is handling this solemn matter with staggering unseriousness.

As the Impeachment Express accelerates, the Democrat House is hell-bent on nullifying the results of the 2016 election and removing America’s choice for President of the United States. This is among the gravest contingencies in this constitutional republic.

On something so momentous, the House should operate once again on a bipartisan basis:

• Before President Bill Clinton was impeached, the House voted on October 8, 1998. The tally was 258-176 to advance an impeachment probe, with 31 Democrats resisting their party leaders.

• At the depths of Watergate, on February 4, 1974, the House voted 410-4 — on a nearly unanimous, bipartisan basis — to launch the impeachment of President Richard Milhous Nixon. He resigned that August 9, before the House adopted articles of impeachment, but after the emergence of severely incriminating evidence of his illegality. What a concept!

• The House also voted 126-47 to commence the impeachment of President Andrew Johnson on February 24, 1868.

Pelosi, a San Francisco Democrat, hurled these precedents off the Golden Gate Bridge.

“There’s no requirement that we have a vote,” she declared Tuesday. “So, at this time, we will not be having a vote.”

Pelosi avoids this opening move because she might lose such a vote or, ultimately, her majority if she forced certain members to support a formal impeachment inquiry.

Pelosi is speaker, thanks to 31 Democrats who won districts in 2018 that Trump secured in 2016. These Trump-district Democrats fear, as does Nervous Nancy, that if they back an impeachment probe, some will face furious constituents, lose their seats, and hand the House to Republicans.

So, as she clutches to political control like a life preserver, Pelosi preserves the political lives of these 31 Democrats.

Beyond this non-vote strategy, Pelosi and her far-Left colleagues have little interest in due process or first-grade-level fairness. These Democrats — the sorest losers in the history of human competition — lust to oust a president whose guts they hate, just for the warm rush of doing so. Unlike the widely watched Nixon and Clinton impeachment hearings, Pelosi’s persecution happens behind closed doors, with all the transparency of a casket. Trump’s attorneys cannot cross-examine witnesses, present counterevidence, or simply sit quietly and watch. Even worse, scheming Democrats have barred the American people from this star chamber.

Democrats often whine that Trump steamrolls political norms. In fact, the norm-crushing steamroller, is being driven by Nancy Pelosi, with House Intelligence Chairman Adam “Four Pinocchios” Schiff riding shotgun. Schiff, another California Democrat, is grilling impeachment witnesses in secret. If the House Judiciary Committee were in charge, as normal, activities surely would be public.

“I want you to make up dirt on my political opponent, understand. Lots of dirt, on this and that,” Schiff read aloud. “And don’t call me again. I’ll call you when you’ve done what I asked.”

Schiff fabricated these words. Caught red-handed, he claimed he spoke “at least part in parody.”

In fact, President Trump’s phone call with Zelensky involved zero coercion to investigate alleged Biden-family corruption in Ukraine. Zelensky repeatedly insists that he felt no such pressure. Nor did Trump threaten to withhold U.S. military aid, absent such a probe. During this call, Ukrainian officials were unaware of any such delay. These weapons — which Obama never even offered — arrived soon thereafter.

These facts should compel the House to abandon this white collar coup d’Ă©tat. At a minimum, the whole House should vote on whether or not to shove America down this rocky path, adjudicate this matter in public, and stop basing these decisions on how best to insulate 31 Trump-district Democrats from the righteous rage of their own voters.