Third whistleblower steps up: me 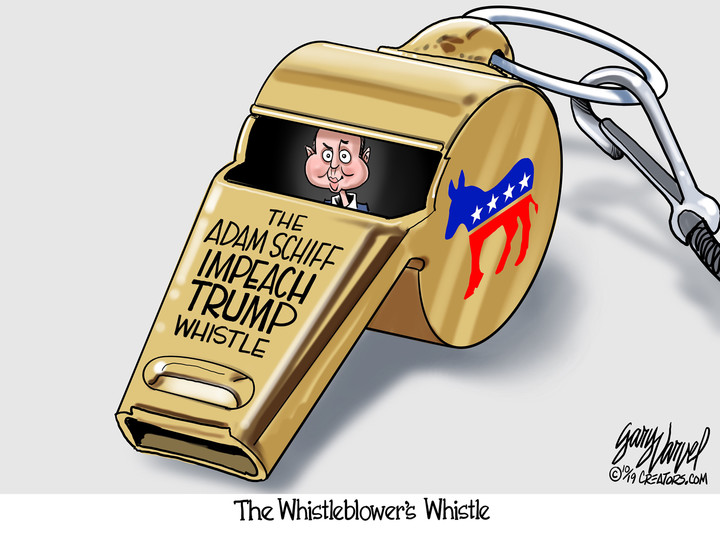 OK, look we started off with one whistleblower in the Donald Trump impeachment inquisition, excuse me, inquiry, but he or she is in hiding and keeping quiet about his or her reported association with one of the Democratic candidates for president. There is another problem, and that is that this person knew nothing first-hand, just second- or third-hand through the grace of gabby intelligence agency buddies.

Ah, but now we have a second concealed whistleblower, someone whose whistle adds little new except that he/she got all of his/her info pretty much first-hand. This person is also a trusted intelligence agency operative who figured White House secrets were headline-worthy abominations, summoned up the gall to speak out and poked my ambitions. I hereby announce I am the third whistleblower, someone who is not breaking his word to anybody, whose identity is proclaimed at the top of the column, who has informants in the dozens, is politically neutral when asleep in bed and is not beholden to unintelligent intelligence agencies.

Maybe you are among those thinking it unpatriotic to criticize intelligence agencies, but take a look at John Brennan, a current TV hack, former CIA director and holder of other resume victories in his campaign to denigrate the republic. One act especially stands out. The Senate was investigating the CIA's enhanced interrogation of terrorists, also called â€śtortureâ€ť by some, and the CIA spied on the Senate. He denied it, but there was later testimony that he actually supervised it. There's no smoking gun here, just a mushroom cloud revealing him as more threatening to national principles than Trump, once piously identified by him as treasonous.

Anyway, it's not as if he had nothing to do with the start of the collapsed Russian-collusion probe, and there's now this unproved tale about Trump doing something almost as bad as what the Hillary Clinton campaign did in its law firm indirectly paying a former British spy for a bunch of phony Russian documents vilifying Trump. As a way of still campaigning, she's constantly explaining her 2016 defeat without ever looking in a mirror that has so terribly much to share with her, and now, to the joy of Republicans, she is hinting at running again.

Even though I am not an intelligence agent illegally leaking classified materials to reporters, I get much of my second-hand information from these reporters' stories, knowing that leaks can lead to a flood of sensation and fun mixed with depression. Even without leaks, however, I learned that House Speaker Nancy Pelosi wasn't feeling democratic enough to have the whole House vote on the inquiry. She ordered it herself, weakening its legitimacy while Rep. Adam Schiff, the Democratic emcee of this show, is keeping embarrassing hearings and truth secret even as he whines that the Trump White House is the zipped-lips villain.

The big accusation, of course, is that Trump called the president of Ukraine to get dirt on a possible political opponent in 2020, Joe Biden. It is far from clear that Trump committed a crime here. It is clear that, as vice president, Biden was caught up in an unmistakable conflict of interest and maybe that's why he wants Trump impeached. The majority of Americans right now also want Trump impeached and I suspect their reason is more general than specific, that they see him unfit, lying, shallow, ignorant, vulgar, thoughtless and worse.

My view is that this impeachment process is flimsy emotion instead of studied patriotism and that the right thing is for Congress to let the people decide what happens to Trump in the 2020 election and zero in on issues having to do with such things as life and death. As for me, someone who has gone through no bureaucratic process and is more discouraged every day, I now quit as the third whistleblower.