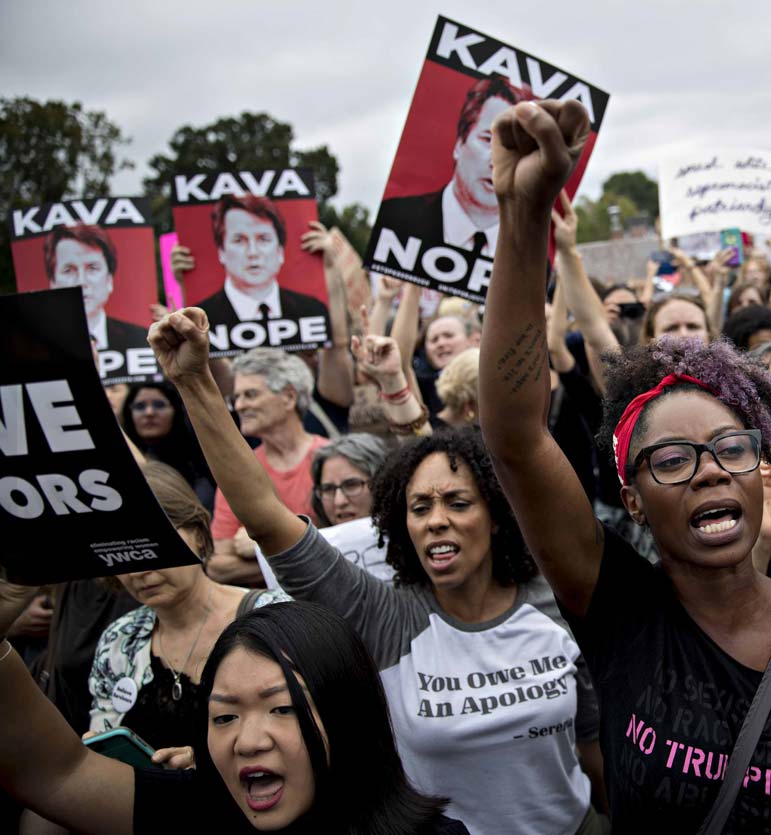 The confirmation of Judge Brett Kavanaugh to the Supreme Court dealt the #MeToo and #BelieveSurvivors movements their first major defeat. Those feminist ideologies will continue wreaking havoc throughout American institutions, however — especially the claim that self-professed sexual-assault victims deserve unqualified belief.

That idea — that the presumption of innocence, fundamental to common law, should be suspended for accusations of sexual assault — has been the cornerstone of the campus-rape bureaucracy; during the Kavanaugh hysteria, that conceit jumped out of the ivory tower into the world at large. It will be no easy task to put it back. In preparation for the next Salem witch trial-like ordeal, therefore, it is worth empirically rebutting the #BelieveSurvivors mandate, as well as its corollary: the claim that if most self-professed rape survivors in our patriarchal culture don't report their assaults, that's because the "social and emotional" costs are too high, as California congressman Ted Lieu explained on MSNBC last Sunday.

Columbia University's infamous "mattress girl," Emma Sulkowicz, was conducting an on-again, off-again sexual relationship with another student, Paul Nungesser. Two days after one of their consensual couplings, in August 2012, Nungesser invited Sulkowicz to a party in his room. She texted back: "yusss," adding: "Also I feel like we need to have some real time where we can talk about life and thingz because we still haven't really had a paul-emma chill sesh since summmmerrrr." A week later, she suggested that they hang out together: "I want to see yoyououoyou." Two months later, she texted: "I love you Paul. Where are you?!?!?!?!"

It wasn't until eight months after their August 2012 coupling that Sulkowicz filed a campus-rape charge, alleging that Nungesser had anally raped her while she struggled and told him to stop. She claims that she waited so long to file so as to avoid re-traumatizing herself. Nungesser argues that she was simply chagrined that they had not become an exclusive couple. Whatever Sulkowicz's motivation for filing, it is impossible to read her post-coital pleas to Nungesser as the aftermath of the most terrifying experience a woman can have, short of murder, rather than as the attempts of a female to reel a favored male back into her orbit.

Nevertheless, Sulkowicz was canonized as a martyr to rape culture, thanks to her stunt of carrying around a mattress to protest Columbia's failure to expel Nungesser. New York senator Kirsten Gillibrand declared herself "inspired by Emma and all of her sisters in arms who have made their voices heard and given voice to thousands of other survivors all around the country." Gillibrand invited Sulkowicz to President Obama's 2015 State of Union address in order to "further amplify her voice."

In September 2013, two freshmen at Occidental College in Southern California had sex after both had been on a 24-hour drinking binge. After making out at a party in the male's dorm room, they conspired to evade the girl's friends, who had escorted her back to her own room. The male, known as "John Doe" in court papers, texted "Jane Doe": "The second that you away from them, come back." Jane responded: "Okay." John wrote back: "Just get back here." Jane responded: "Okay do you have a condom." John replied: "Yes." Jane texted back: "Good, give me two minutes." Before leaving her dorm room for their appointed tryst, Jane texted a friend from back home: "I'm going to have sex now." After their sexual encounter, Jane texted a smiley face to her friends. She then went to a common room and sat on another guy's lap, joking about NASCAR. The next day she went back to John's room to pick up her earrings and belt.

Jane reported their coupling to campus authorities only after seeing that John was unaffected emotionally by it, whereas she, having lost her virginity, felt distracted and unable to concentrate. Having been instructed in the ways of the patriarchy by Occidental's Title IX bureaucracy, she decided that she should not have to experience the psychological discomfort of randomly running into John Doe around campus, and that he should be expelled. Occidental was only too happy to comply. It found John Doe guilty of rape and expelled him in December 2013.

Jane's psychological distress was undoubtedly real. Sexual liberation pretends that males and females respond identically to one-night stands, and that the loss of virginity is just an insignificant way station en route to the rounds of casual sex expected of contemporary adults. In fact, women are hormonally and emotionally affected by intercourse in a way that most men are not. And traditional culture was right to regard the loss of virginity as a milestone in a girl's life, and to surround it with the sanctifying rituals of marriage.

But however understandable Jane's post-coital emotions, they do not justify converting what was clearly a mutually agreed-upon coupling into rape. Any male whose partner asks about condoms, then voluntarily enters his bed for the express purpose of sex, is going to assume consent, and with reason.

In 2014, Brett Sokolow, a prominent advisor on campus sexual-misconduct cases, provided another window into the consensual sex that the feminist-industrial complex converts into campus rape. In an open letter to the higher-education community, he described a series of trumped-up charges with which his Title IX consulting firm had been involved, including a female student who had spread rumors by social media that she had been raped by a male student. She then admitted to investigators that she had consented to their drunken hook-up. When asked why she had called the encounter rape, she replied: "You know, because we were drunk. . . . we just call it that when we're drunk or high."

In another case, a female student was caught by her boyfriend while cheating on him with another male student. She then filed a complaint of assault against that second male. The morning after their sexual encounter, they had exchanged texts. He wrote: "How do I compare with your boyfriend?" She responded to the boy she later accused of rape: "You were great."

In 1985, Ms. magazine published a study by psychologist Mary Koss that gave rise to the statistic that one in four college females would be sexually assaulted during college. The study also found that 42 percent of putative rape victims went on to have intercourse again with their alleged assailant — a behavior inconceivable in the case of actual rape. In fact, it was the researcher herself who classified the subjects as victims; 73 percent of the women whom the researcher designated as rape survivors said that they hadn't been raped, when asked directly.

According to the #BelieveSurvivors platform, the reason why most researcher-classified rape victims don't report their rapes is because the reporting process is too anti-female and re-traumatizing. In fact, most researcher-classified rape victims don't report because they don't think what happened to them was serious enough to report — another conclusion inconceivable in the case of actual rape.

In 2015, the Association of American Universities (AAU) conducted a sexual-assault survey at 27 selective colleges. The vast majority of survey respondents whom the AAU researchers classified as sexual-assault victims never reported their alleged assaults to their colleges' rape hotlines, sexual-assault resource centers, or Title IX offices, much less to campus or city police. And the overwhelming reason that the alleged victims did not report is that they did not think that what happened to them was that serious. At Harvard, for example, over 69 percent of female respondents who checked the box for penetration by use of force did not report the incident to any authority. Most of those non-reporters — 65 percent — did not think that their experience was serious enough to report. Over 78 percent of Harvard female respondents who checked the box for penetration due to "incapacitation" did not report. Three-quarters of them said that what happened to them was not serious enough to report. This is a judgment not allowed by the campus rape industry.

Even before the sexual revolution destroyed the norms that once governed the male libido and that steadied the relationship between the sexes, sex was the realm of ambiguity and indirection. The #BelieveSurvivors contingent asserts that survivors rarely if ever lie about their experiences — meaning, they rarely make those experiences up out of whole cloth. This assertion is mostly true; in most cases of alleged campus rape, something did happen between the accused and the accuser. The issue is how to classify what happened. (To be sure, there are rapes that go unreported, but there are also outright fabrications, such as the Rolling Stone University of Virginia campus rape hoax, which cost the magazine millions in damages, and the Duke lacrosse team rape hoax, for which the local prosecutor lost his law license.) The #BelieveSurvivors movement claims unique authority to interpret women's experiences, even if that means ignoring a woman's own classification of her experience as not rape.

The rest of us need not accede to this assertion of monopoly interpretive power. Our booze-fueled hook-up culture has made relations between men and women messier than ever, leaving many girls and women with pangs of regret — but those regrets do not equal rape. If we were actually in the midst of an "epidemic of sexual assault," as New Jersey senator Cory Booker asserted the evening of the Ford-Kavanaugh hearings, we would presumably have seen women and girls take protective actions, such as avoiding frat parties and flocking to single-sex schools. None of those protective actions has occurred, however. Either women are too clueless to avoid patent danger, or the epidemic of sexual assault is a fiction. All evidence points to the latter conclusion. Judge Brett Kavanaugh may be the latest male to have his life torn apart by that fiction, but he won't be the last.