What Do Dem Voters Want? 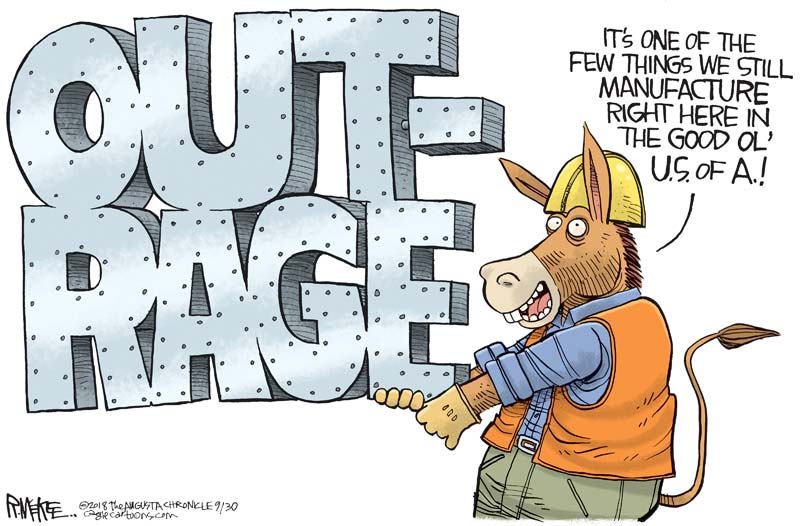 I am trying to put myself in the shoes of Democrat voters, not those in hysterics, screaming obscenities and pounding on the doors of the U.S. Supreme Court, or those mindlessly chanting like Stepford automatons in the Senate hallways.

No, I mean the garden-variety Democrats I've known as neighbors, friends and co-workers my entire life; the second- and third-generation Democrat voters who say, "I voted for Bill Clinton, and my parents voted for John F. Kennedy, and my grandparents voted for 'Give 'em hell' Harry Truman and FDR."

Where are they? Who is speaking for them? And what does the current iteration of the Democratic Party offer them?

I ask because I see what the national Democratic Party has become, and it's disturbing.

During the 2016 presidential campaign, the media predictably spread inflammatory lies about the "threats" the nation would see if Donald Trump were elected (just as they do with every other Republican candidate). Right on cue, violence broke out at Trump rallies. San Jose, California, was among the worst. Trump supporters were chased, knocked down, punched, kicked, and pelted with eggs and rocks. The San Jose mayor — a Democrat — blamed Trump .

After Trump won, riots — spurred on by gangs of black-clad "antifa" "protesters" —became more frequent and widespread. Violence broke out in Portland, Oregon, and Los Angeles. In Chicago, a man was dragged from his car, brutally kicked and beaten by a mob screaming anti-Trump epithets.

Trump's inauguration in January 2017 was marked by riots in Washington, D.C., and throughout 2017 we saw more antifa riots in Portland, Seattle and Berkeley, California. Far from being viewed as fringe extremists, The Atlantic magazine noted that antifa's tactics enjoyed "substantial support from the mainstream left."

There have also been increasing incidents of violence against individuals identified as Trump supporters, Republicans or conservatives. Scholar Charles Murray was attacked by a mob at Middlebury College, and his host — Allison Stanger, a professor of political science (and a Democrat) — was injured. Kentucky Republican Sen. Rand Paul was attacked by a neighbor and left with five broken ribs. Most alarmingly, a crazed Bernie Sanders supporter shot five people at a baseball game for congressional Republicans and their staff in June of last year. Louisiana Republican Rep. Steve Scalise was critically wounded and nearly died.

You would think that incidents of this gravity would prompt Democratic leadership to tone down the rhetoric. But congresswoman Maxine Waters told a crowd in June to harass members of the Trump administration: "if you see anybody from that Cabinet in a restaurant, in a department store, at a gasoline station, you get out and you create a crowd. And you push back on them. And you tell them they're not welcome anymore, anywhere."

And they keep doubling down. Hillary Clinton — reliably tone-deaf — announced this week that there would be no civility until Democrats regain power. Politico argues that Democrats need to be more "ruthless."

Just as disturbing as Democrats' tacit tolerance (if not outright encouragement) of violence is their newfound disdain for the Constitution and the political processes that, just a few years ago, they were sure were going to give them control of the government for decades to come. The Kavanaugh confirmation fiasco made clear that due process, the rule of law and the presumption of innocence were all expendable if it meant keeping another conservative off the Supreme Court.

Perhaps Democrats behaved so abysmally because they view the court as the last stand in what appears to be an era of dwindling political influence. (Democrats' cultural influence certainly continues apace, via the media, Hollywood and academia.) Since Barack Obama was elected president in 2008, Democrats have lost control of the U.S. House of Representatives and the U.S. Senate, as well as nearly 1,000 seats in state legislatures (Republicans now control both houses in 32 states) and 13 governorships (33 states have GOP governors).

But current Democratic Party talking points contemplate the erosion of other fundamental principles of constitutional governance as well. Predictably, after Clinton lost to Trump, she called to eliminate the Electoral College in favor of presidential elections by popular vote. After Justice Kavanaugh was confirmed last week, the left became outraged by a bicameral Congress that protects the interests of rural and less populated states. Some are calling for the U.S. Senate to be elected on the basis of population, as is the House of Representatives.

Democrats keep losing, but they don't seem to be getting the message. Instead of slander, threats, violence, riots and shredding the Constitution to disenfranchise all the people who don't agree with you, why not try offering policies that win elections?

But what do I know? I'm not a Democrat.