Is the #MeToo movement itself a threat? 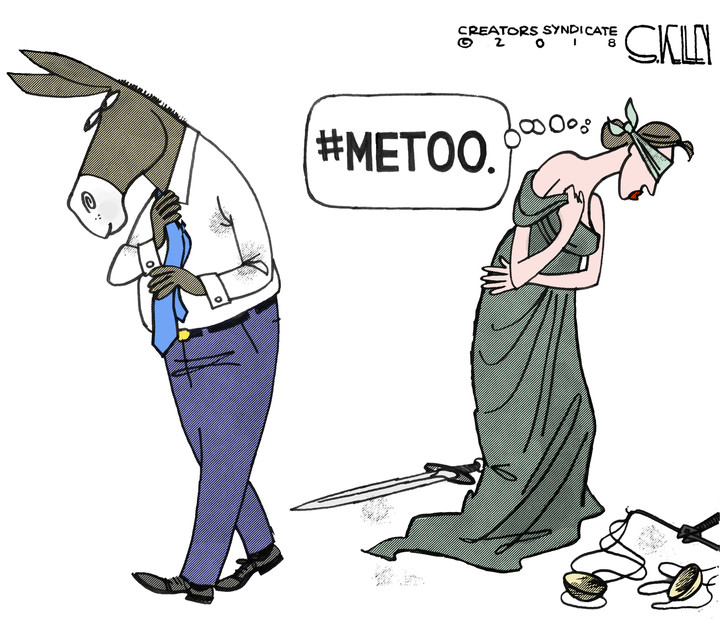 Watch out, stay calm, don't go the way of the French Revolution that replaced tyrants with worse tyrants, chopping off innocent heads by way of self-righteous evil.

That's what some might want to say to the #MeToo movement as it besmirches its truly noble objectives by some telling us that Brett Kavanaugh is guilty until he impossibly proves he isn't, that women never lie, that masculinity is toxic and that trusting old, white men is swimming with the sharks.

Sexual assault is obviously an abomination that must be fought, and it was impossible not to sympathize with Kavanaugh's accuser, Christine Blasey Ford, as she testified at a Senate hearing on national TV. She was clearly troubled, emotionally wrought, almost surely a victim of some horror at some time. But her story bounces all over the place and has no corroboration at all. None. Among those she said were at a party where attempted rape occurred was a best friend who gently says, well, no, she was never there, and there is almost unquestionably nothing there in some of the yarns of others who have lined up behind Dr. Ford.

Nevertheless, when you turn on the TV or read an op-ed piece, there's almost always a #MeToo feminist saying a victim is a victim if she says she is a victim, that evidence is no more necessary than a bulldozer to lift a toothpick and that we must presume the guilt of the guy no matter what the filthy liar says.

Tell that to Gregory Counts and VanDyke Perry, two men accused of kidnapping and rape by a woman who this year admitted she made it up after DNA tests proved as much. The thing is that Counts, arrested at age 19, had already spent 26 years in prison, and Perry, arrested at 21, had spent 11 years in prison. According to The New York Times, the woman's testimony was inconsistent to begin with, and guess what. This kind of thing is not all that unusual, and meanwhile we have college campuses at which a male student can be expelled and have his life ruined without the refuge of due process if a female student has at him.

While long denied equal rights, women in America seem to have been stronger than women almost anyplace else in the world. Alexis de Tocqueville, the great French philosopher who wrote about America in the early 19th century, is quoted as saying an American woman "thinks for herself, speaks with freedom â€¦ is full of reliance on her own strength," is neither timid nor ignorant, is happily bold and "is always mistress of herself."


Women did ultimately pursue their rights, too, did get the vote, still lost out in other arenas but kept pushing on to the point where now, as one example of advancement, they outnumber men in our colleges and universities. One thing they fought for in the 20th century was sexual equality with men. That gave us the sexual revolution, where many old norms were shoved aside, leading to freer sex — "hookup culture" on campuses â€“ and to more male abuse. And so women tried to save themselves.

While people have said the #MeToo movement is unlike anything before it, it isn't. There was a less flamboyant but still meaningful version in the 1990s, especially coming down on bosses taking advantage of employees until President Bill Clinton was exposed as a leader of the Casanova pack. Then many liberal feminists put politics before their central cause and defended his outrages, often asking critics, "Haven't you ever lied about sex?" Interestingly, one analysis I ran across says the new #MeToo movement arose because his wife was defeated in her race for president by a man with Clintonesque depravities.

With the public shaming of so many celebrities and others, the movement has probably already lessened threats to women, and that's good. But zealotry isn't good. It can breed assorted bigotries and lead to different kinds of abuses, societal unfairness, indecency, to a figurative guillotine that may not literally cut off heads but can cut off fundamental human rights for those ghastly creatures called men.