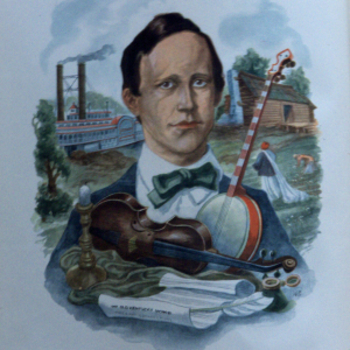 Stephen Foster, before his descent into poverty, portrayed with much southern iconography by William Sharp

On this Columbus Day weekend, Christopher Columbus is close to being entirely obliterated from American life, and the barbarians have galloped on to newer targets for their rage. How sad I was to see that in his home town a memorial to America's first great songwriter is to be dismantled and removed. Stephen Foster's songs were uniquely popular on both sides of the Civil War, but he seems less likely to survive the cold Civil War of 21st century America. And so the cultural vandals, who cannot create but can only destroy, scent another victory.

In my book The [Un]documented Mark Steyn, there's an entire section called "Mystic Chords" - that's an allusion to Lincoln, for all you know-nothing safe-spacers out there. It begins with an appreciation of Foster titled "Sounds of the Rude World", from which what follows is drawn. In Pittsburgh, the rude world has all but throttled his "soft melody", but, for the moment, not here:

A century and a half ago, living in a cheap hotel on the Bowery in New York's Lower East Side, a young man laid low by a fever tried to rise from his sick bed. He slipped and fell against the wash basin, shattering it and thereby gashing his throat and gouging his head. It was some time before he was found and taken to the Welfare Island hospital, the same hospital to which Jerome Kern (composer of "The Way You Look Tonight", "Ol' Man River" and many more) was taken when he collapsed on a New York street in 1945 with no identification on him. And, like Kern all those decades later, Stephen Foster died there, on January 13th 1864, three days after his fall. He was only 37 and had in his pocket just a little more than his years in pennies: 38 cents.

Foster's name isn't as famous today as it was in, say, the mid-20th century, but his songs are still known: "Camptown Races", "Oh! Susanna", "I Dream Of Jeanie With The Light Brown Hair" - or, as Bugs Bunny liked to sing, "I dream of Jeanie - she's a light brown hare." Two Stephen Foster compositions are official state songs - "My Old Kentucky Home", and, in Florida, "The Old Folks At Home (Swanee River)". Twenty-first century Americans know far more songs by Stephen Foster than they do by any American songwriter before Irving Berlin. As for Berlin, Ann Ronell (the composer of "Willow, Weep For Me" and "Who's Afraid Of The Big Bad Wolf?") worked for his publishing house as a young woman, and told me years later of being in Berlin's private office and seeing all his Foster books and memorabilia. "Mr Berlin," his copyist informed Ann, "considers himself the reincarnation of Stephen Foster."

But Berlin died at 101 owning and enforcing all his copyrights (from "White Christmas" down), and with a lot more than 38 cents in his pocket.

Before his career went south, his songs did. Stephen Foster wrote "Ethiopian songs" for the minstrel shows, and plantation ballads ("Massa's In De Cold, Cold Ground") for parlor pianos. For all the copious deployments of the D-word ("darkies") that have to be airbrushed out in contemporary renditions, he brought the sensibility of the south vividly to life for northern audiences in a way that no-one else did. During the Civil War, his songs remained popular on both sides. But he was not a southerner. He was born in a Pennsylvania town called Lawrenceville, just outside Pittsburgh, on the perfect day for a man whose songs would weave themselves into the fabric of the nation: the Fourth of July - and not just any Glorious Fourth but July 4th 1826, America's 50th birthday and the day on which its second and third presidents, John Adams and Thomas Jefferson, both chanced to die.

After Tin Pan Alley got going in the 1890s, and even more so after ASCAP (the composers' enforcement arm) came along, songwriting was a potentially very lucrative activity. But in the mid-19th century it was a much more perilous way to make a living. You could pitch a song to a music publisher, but they generally offered only a one-time fee to purchase the composition outright. In 1848 Foster sold a number he'd written to the Peters firm in Cincinnati for $100. It was an insistent polka-like melody with nonsense lyrics ("De sun so hot I froze to death") called "Oh! Susanna". Christy's Minstrels, the biggest stars of the day, liked it enough to make it their theme song, and then, without any help from radio or records or iTunes, a national hit. In theory, that should have been great news for its author. In practice, it meant that other minstrel troupes took up the song and published it under their own names in cities far away from Mr Peters in Cincinnati. In the three years after its original publication, it was re-published and re-copyrighted - ie, stolen - by at least twenty other publishers. Before "Oh! Susanna", no American song had sold more than 5,000 copies of sheet music. In nothing flat, "Oh! Susanna" sold over 100,000 copies - and all Stephen Foster had to show for it was that original hundred bucks.

Today, most Americans think of "Camptown Races", "Old Black Joe", "Nelly Was A Lady" and the rest of the Foster catalogue as "folk songs" - numbers that just sprang up somewhere out of some vernacular musical tradition, rather than the fruits of one particular individual's labor. But even at the time many Americans thought of Foster's songs as "folk music" - the 49ers who sang "Oh! Susanna" all the way to California assumed it was a folk tune; wasn't everything? I mean, who expected to be paid for writing songs?

Stephen Foster did. Firth, Pond & Co of New York noticed "Oh! Susanna" and its spectacular sales, and the following year - 1849 - offered Foster a contract to write songs for them for a royalty rate of two cents per copy of sheet music. And thus Stephen Foster became America's first professional songwriter - that's to say, the first man in America paid to write songs, rather than a blackface minstrel who happened to cook up his own material, like Dan Emmett ("Dixie") or Thomas Rice ("Jump Jim Crow"). Writing songs was what he did: He composed music and lyrics, and then found someone else to sing them. On the strength of his Firth, Pond contract, Foster felt he was financially secure enough to marry his sweetheart Jane - the real-life Jeanie with the light brown hair - and in 1851 they had a daughter, Marion.

It never quite worked, not really. His parents died, his writing sputtered, Jane left him for a while and took Marion with her, his output dwindled further to four songs a year - and his debts mounted. He persuaded Firth, Pond to advance him cash against future songs - and then found he had no future songs. The contract expired, and he sold his rights to pay his debts. Then came the Civil War. He moved with Jane and Marion to New York, but in 1861 they left - this time, for good. Broke and abandoned, Stephen Foster was living the lyric he'd written the best part of a decade earlier:

But they did, and they got harder, and on that bleak January day in 1864 they finally penetrated his cabin door. Two months later, in March 1864, Wm A Pond of New York (Mr Pond having separated from Mr Firth) published what he billed as "the last song ever written by Stephen C. Foster. Composed but a few days prior to his death". On my own copy of the sheet music, printed shortly thereafter, Mr Pond was more circumspect, calling it "one of the latest songs of Stephen C Foster" - and, lest that confuse anyone who'd been reading the obituaries column, a parenthesis appears under his name: "Composed a short time before his death." Presumably, all of his "latest songs" would have had to be "composed a short time before his death". In those last grim years in New York, there were supposedly over a hundred of them, but, in one of his many moves from seedy rooming house to seedier rooming house, Foster's trunk of manuscripts was lost and never found. And so there was only really one "latest song" - if not, as it's often claimed to be, the very last song he ever wrote, then certainly the last Stephen Foster song to implant itself in the popular consciousness:

Beautiful Dreamer
Wake unto me
Starlight and dewdrops are waiting for thee
Sounds of the rude world
Heard in the day
Lull'd by the moonlight have all pass'd away!

Who is he writing about? If, as some musicologists think, the song was composed in 1862 - two years before his death - was it a lament for his wife Jane, recently decamped to Pennsylvania? Or is it merely a sentimental ballad by a professional songwriter, the first American paid to write such things? It's a haunting tune in a 9/8 time signature and chock full of triplets - "beau-ti-ful"/"wake un-to" - that in the wrong hands would be awfully boring. But the melody is so pure and translucent it seems the very essence of song, a song that sounds as if it's always been here, just waiting to be plucked from the air. And for Stephen Foster's last hurrah it is appropriately a pledge of faith in the beguiling, transformative powers of music:

But the queen of his song is far away in another state, and the cares of life's busy throng, the sounds of the rude world, are not gone but pressing in all around. Al Jolson, Bing Crosby, Nelson Eddy, the Ink Spots, Jerry Lee Lewis, Roy Orbison, Suzy Boggus, Sheryl Crow and thousands more sang "Beautiful Dreamer" in the course of the 20th century. Not a soul sang it in Stephen Foster's lifetime. The total musical earnings of his short life came to $15,091.08. In the years after his death, his widow and daughter earned from "Beautiful Dreamer" and the rest of his catalogue a mere $4,199 between them. In the last century, those songs would have been worth millions. But by then they were out of the copyright they'd never quite been in.

Along with the 38 cents, they also found a scrap of paper with the penciled words: "Dear friends and gentle hearts." A title for a new song? Eighty-five years later, Sammy Fain, composer of our Song of the Week #84 "I'll Be Seeing You", and Bob Hilliard, writer of SOTW #19 "Civilization (Bongo Bongo Bongo)", were sufficiently inspired by the tale of Stephen Foster's last words to turn them around and write a song called "Dear Hearts And Gentle People" - a big hit for Bing Crosby and Dinah Shore but not the kind of tune Foster would have written on the theme.

Dear friends and gentle hearts: A century and a half ago, Stephen Foster could have used more of each. But he wrote "Beautiful Dreamer" in a flophouse, and it will live forever.