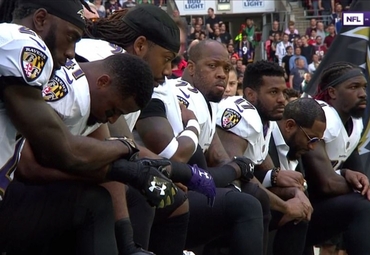 What so proudly they hail...

For whatever reason, the Baltimore Ravens and the Jacksonville Jaguars engaged in a game of American football at Wembley Stadium in London last month. "The Star-Spangled Banner" was played, and two dozen players dropped to the ground and "took a knee". Then "G0D Save The Queen" was played, and all the Americans got off their knees and remained standing for the duration.

What are we to make of this?

At this point, judging from most of the ludicrous commentary on this issue, one is supposed to say something about the players exercising their First Amendment rights, and how one has to respect that, etc. Except they don't have a First Amendment in the United Kingdom, so presumably the authorities would have been entitled to release the hounds and open up the water cannon. Which I'd have enjoyed more than the football, to be honest.

As an unassimilated immigrant, I know nothing about the NFL, and have even less interest in it. Well, except that Rush likes to take off the day after Super Bowl Sunday, so I often find myself behind the Golden EIB Microphone come Monday and obliged to fake some layman's knowledge of the weekend's events, which usually involves double-checking that the Super Bowl isn't a basketball game, and winging the rest. I've learned enough, though, to understand that the businesses that operate America's sports are oddly out of sync with the public that has so lavishly enriched them - in a way far beyond other cultural activities like movies and pop music and stand-up comedy.

Beyond all that, I'm interested in civic rituals - like standing for national anthems. And my sense that the knee-droppers had unhinged the American conversation was confirmed a couple of weeks back when I caught Brian Kilmeade hosting a segment on "The Fox News Specialists" about this phenomenon.

As I recall it, one of Brian's co-hosts and one of his guests agreed that this was a valid protest about systemic racism, police brutality, etc. The other co-host and the other guest said, well, however you feel about it, they're entitled to exercise their First Amendment rights, and it's a dignified, respectful form of protest to just silently drop to your knee during the national anthem. As opposed, presumably, to scratching your bollocks or taking a piss.

And I could sense Brian Kilmeade coming closer than he usually does to tearing his hair out. It's not a question of what you're free to do, but of what is seemly to do. And a shared sense of what is seemly is vital to keeping any society functioning and, ultimately, free. To see it in terms of legal absolutism - one has the "right" to take a knee, just as one has the "right" to shout "F**k!" during your grandmother's funeral - is reductive, and diminishing. Down in Oz last year, I quoted Lord Moulton, an English judge who went on to hold during the Great War the enviable title of "Director-General of the Explosives Department". Moulton divided society into three sectors, of which he considered the most important to be the "middle land" between law and absolute freedom. At one end, one is free to do anything; at the other, one is forbidden to do certain things; but in between lies the domain of manners, in which the individual has to be "trusted to obey self-imposed law".

"In this domain," wrote Moulton, "we act with greater or lesser freedom from constraint, on a continuum that extends from a consciousness of duty through a sense of what is required by public spirit to good form appropriate in a given situation."

Almost any point on that continuum covers the minimal civic act of standing for a national anthem. If you love your country, your "consciousness of duty" commands you to respect its flag and anthem: you need no statute to direct you to do so. On the other hand, if you feel, as many do, ambivalent about your flag or anthem, "good form appropriate in a given situation" suggests that, out of comity with your neighbors, rising to your feet for a minute or two is the appropriate thing to do. Many republicans and/or atheists (into both of which camps falls Jeremy Corbyn) are not entirely happy about a song enjoining the Almighty to confer long life on the monarch; the current Australian prime minister was a prominent member of the unsuccessful campaign to replace the national flag; I've attended events in the presence of Quebec's Lieutenant-Governor, who enters accompanied by the Vice-Regal Salute, which is the first half of "God Save The Queen" and the last half of "O Canada", neither of which secessionist Quebeckers care for. But whatever our views we all suffer it "through a sense of what is required by public spirit".

That presumably is why on Sunday two dozen kneeling Americans decided to rise to their feet for Britain's national anthem. Because they understood that were they to remain kneeling they would be regarded by their London hosts as boorish graceless ignorant clods - which, in fact, they are, with respect to their own anthem. We stand for the anthems of foreigners not out of allegiance but out of Moulton's "good form". Standing for other people's anthems is the minimal respect required to transact international relations: At, say, US/Soviet summits, Reagan could have taken a knee to protest Moscow's human rights record, and Chernenko could have taken a knee to protest that Reagan was a running dog of capitalism and imperialism. But both men remained standing - because that's the minimal requirement for any mutually beneficial relations.

So, when a bunch of pampered poseurs decide to drive a stake through a primal civic ritual, that's not a small thing. Lord Moulton called it "the domain of manners" because it is literally a land, the public space, a realm. And like any realm it requires a shared anthem and flag. To reduce such things to objects of partisan controversy - whether over racist policing in Democrat cities or transgender bathrooms or anything else - is to shrink the land of manners. Which ought to be disturbing - because, as Lord Moulton put it, "The real greatness of a nation, its true civilization, is measured by the extent of this land."

By that measure, our greatness is shriveling fast. The land of "good form appropriate in a given situation" has been encroached upon remorselessly, to the point where everything can merely be legal or illegal, and therefore to render any judgment of our own upon the merits of this or that would be presumptuous. Hence all these ridiculous discussions on the "constitutional" right of bazillionaire narcissists and their unlovely employers to shatter one of the small but critical social norms hitherto observed by all: The domain of absolute freedom (they have the right to take a knee!) nibbles away at the domain of manners from one end, and the domain of law answers (the NFL should fire them!) with a response correct in legal terms but which in itself nibbles away at the domain of manners from the other end.

For anyone who wishes to live in a civilized society where the observance of social norms can be safely assumed, this wretched business is a loss - for what remains of social cohesion, for "true civilization" and for "the real greatness of a nation". A national anthem can be a national anthem or an opportunity for self-expression, but not both. And, if this is yet one more thing that Americans can no longer agree on, if a people lack the minimal social glue to rise reflexively when the band strikes up the first bars of "O-oh, say, can you...", you have to wonder whether anything remains to bind us together at all.