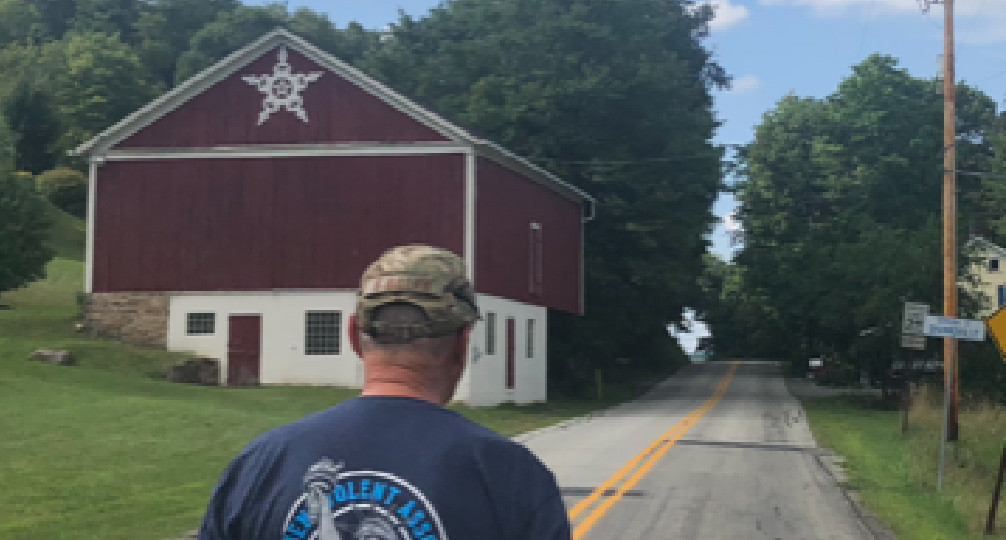 Frank Siller walks towards the site where Flight 93 went down on September 11, 2001. Photo Credit Salena Zito

SHANKSVILLE, Pennsylvania — The first thing you notice about Frank Siller is the resolve in his mission. Each step he takes along Shanksville Road on the outskirts of this Somerset County town is done with purpose.

The sound the steps make is a forward motion; there is no hint of retreat.

You can imagine it is a trait he shared with his brother Stephen who, 20 years ago in his capacity as New York City firefighter, went running toward the burning World Trade Center twin towers in the early moments following the deadly terrorist attacks on Sept. 11, 2001.

Siller is walking toward the national park that honors the Flight 93 passengers who made the conscious decision that beautiful, cloudless day to do whatever it took to save others who were in harm's way.

It was a decision that sacrificed their own lives to save others, Siller said.

"Those were the first heroes in the first war on terrorism," he said. "They were the first people, like my brother, who ran towards fellow Americans in distress. They carry that same human spirit (as) the men and women who signed up to go to Afghanistan and Iraq."

They also have the same spirit the men and women in blue do.

"They put their lives on the line every day for people like you and me," he said as we walked the steep climbs of the winding roads connecting the towns, farmlands and coal mines that dot the Appalachian region.

As the cars and pickup trucks pass him along the road, they wave, shout, "Thank you," or tell him to "never forget." And, of course, he won't. He has made that his life mission.

He gets the same reaction from people sitting on their stoop or front porch or hanging their laundry outside. The roads and streets are lined with American flags, not because they know Siller is coming, not because of the 20th anniversary — but because in places like this, in middle America, they always do that.

It does not go unnoticed by Siller.

Siller is the chairman of the Stephen Siller Tunnel to Towers Foundation, an organization that provides mortgage-free homes to firefighters, police and military service personnel who are killed or severely injured in the line of duty.

On that fateful morning, Siller said he and his other brothers were waiting for Stephen to come home from his shift.

"He'd just finished his night shift; I was with my other two brothers, Russell — God rest his soul — he died about a year and a half ago, and my brother George, and we were going to play golf."

Siller said when Stephen heard on the scanner the tower was hit, he turned his truck around and drove back to his firehouse.

"On the way back, he called his wife and said, 'Tell my brother I'll try to catch up with him later.' His company had already responded by the time he got back to the station, so he got his gear, put it in his truck, and drove to the mouth of the Brooklyn Battery Tunnel, which is not far away."

When he got to the Brooklyn Battery Tunnel, it was shut down, Siller explained. So, "he did what most any other firefighter or a police officer would do: He strapped his fire gear on his back and ran through that tunnel, which is almost two miles long, came out the other side, and wanted to help. He wanted to save people's lives."

The heroic path he chose cost him his life. It is estimated firefighters like Stephen saved thousands of lives that day, and that bravery is what inspired Siller to start the foundation.

"I mean, who does that?" Siller said. "And he was married, five kids, and he gave it all. So we just knew that we had to honor what he did, and we wanted to make sure we never forget not just Stephen, but everyone."

Siller, 68, will complete his walk at Engine Company 10 near the World Trade Center on Sept. 11. Along the 500-mile-plus journey, he has found himself in towns like Winchester, Virginia; Cumberland, Maryland; Hershey, Pennsylvania; and Easton, Pennsylvania. He has been greeted along the way with parades, hugs, barbecues and love — all reminding him that his job to tell people never to forget has not been in vain.