If you don't say what they like, protesters show up at your door. Is that OK? 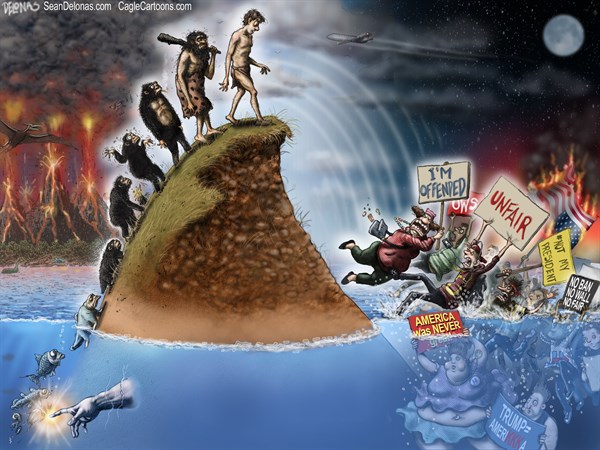 In the United States, unlike Russia, Hong Kong or Afghanistan, citizens have a right to gather peacefully together to protest and demonstrate.

Hundreds of thousands of Americans marched on Washington in 1963 for civil rights. Half a million marched for immigrants' rights in Los Angeles in 2006. Abortion opponents protest at clinics, opponents of mask mandates demonstrate at state capitols, and antiwar protesters wave signs and yell slogans at the Pentagon.

I've never had a moment's doubt about the value of Americans' right to protest — even when I watched a demonstration in 2010 of neo-Nazis gathered in the park next to Los Angeles City Hall waving swastika flags and fulminating.

But lately, something's changed. Instead of sticking to City Hall, downtown streets, the Lincoln Memorial and other such public spaces, activists on both the right and the left have been regularly taking their protests into residential neighborhoods, to the homes of those they're angry at.

Sometimes, they're well-behaved. But other times, they come early or stay late. Sometimes they bang on pots and pans or honk horns or shout through bullhorns at people eating dinner with their families. At times they've thrown paint on houses, shined flashlights in the windows, trespassed, blocked driveways, yelled threats, peered in.

Black Lives Matter protesters have targeted the homes of government officials, as have advocates for homeless people, opponents of homeless housing and anti-vaxxers — they all seemed to have received the same memo.

Should this be allowed?

The L.A. City Council doesn't think so. Last week, it voted 13-1 to direct the city attorney to draft an ordinance barring protesters from coming within 300 feet of a targeted home.

The motion was introduced by council President Nury Martinez, who said that several days earlier a crowd at her house had been shouting through bullhorns and screaming obscenities into her daughter's window. "I'm just completely done," she said.

Cops, prosecutors, councilmembers, Mayor Eric Garcetti and others have all been targeted at their homes by protesters. So have officials in Seattle, Fresno, Minneapolis, Idaho, Orange County, Oakland and Louisville, Ky., among other places.

The best known case in Los Angeles involved former L.A. County Dist. Atty. Jackie Lacey. A group arrived at her house before 6 a.m. last year, banging drums and chanting to protest her handling of police violence. When several protesters came onto the property and approached the front door, Lacey's husband emerged with a gun, pointed it at them and ordered them off his porch. He was charged with three counts of misdemeanor assault with a firearm, but I'll bet a lot of people felt some sympathy for him. I did.

Oakland Mayor Libby Schaaf said she felt threatened after protesters threw fireworks in her driveway, graffitied the house and threw paintballs and eggs at the walls. I suspect David Michaelson, an employee of the L.A. city attorney's office, felt threatened too, when he read this from a homeless advocacy group: "Nice neighborhood, David Michaelson. Would be a real shame if we came and disrupted it."

In their own defense, some protesters argue that racism and homelessness are too important to be addressed with quiet expressions of polite disagreement in public spaces. A little noise, some shouting, some discomfort in front of your neighbors — that's nothing, they say, compared with being shot by the police or living on the sidewalk. Public officials should stop whining.

Of course, that's what the people demonstrating against masks and vaccines say too. Lots of activists believe their own issues are too urgent for quiet discussion or civil protest.

Public officials say they feel worried for their families. Those who have gone outside to talk to the demonstrators have sometimes found them unwilling to discuss the issues, just eager to provoke a fight.

But I'm also reluctant to see L.A. toughen its laws or crack down on speech until it has used the enforcement tools it already has.

There's already a law on the books that sets a 100-foot buffer zone between protesters and their targets. What good would it do to increase that to 300 feet if the existing law is not always enforced?

The goal should be to deter illegal or dangerous behavior without burdening those who are exercising their 1st Amendment rights legitimately. When people violate the law, they can be cited or arrested.

Supreme Court Justice Hugo Black wrote, more than half a century ago, that demonstrations at private residences could be regulated: "I believe that the homes of men, sometimes the last citadel of the tired, the weary and the sick, can be protected by government from noisy, marching, tramping, threatening picketers or demonstrators bent on filling the minds of men, women and children with fears of the unknown."

I'm with Justice Black in theory.

But I also know that freedom comes at a price. That was clear when in 1978, the courts permitted Nazis to stage a demonstration in Skokie, Ill., home to thousands of Jewish Holocaust survivors.

No one has the right to make threats or vandalize property, but peaceful protest is a fundamental right.

Let's keep dangerous and intimidating behavior in check with the laws we have.

Nicholas Goldberg is an associate editor and op-ed columnist for the Los Angeles Times.