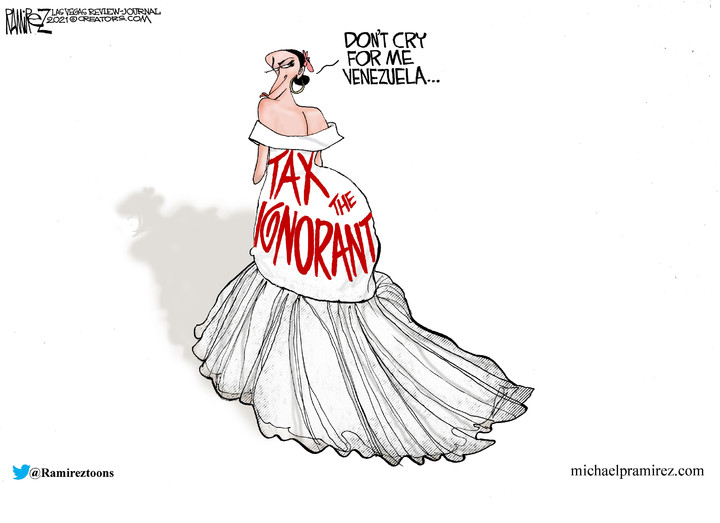 Rep. Alexandria Ocasio-Cortez donned an elegant gown with the slogan "Tax the Rich" painted on the back at the Met Gala in New York, where guests selected by Vogue's Anna Wintour ponied up around $35,000 a pop for tickets.

The scene was reminiscent of Tom Wolfe's "radical chic" — though rather than being guests of the well-heeled in Park Avenue duplexes, today's revolutionaries own luxury condos and drive around in government-subsidized electric cars that most Americans could never afford.

My first question, though, is: Who doesn't want to "tax the rich"? Judging from my social-media feed, there seems to be a growing segment of people under the impression that the wealthy pay little or nothing in taxes. When you ask Americans if they support a wealth tax, a majority support the idea. One recent poll found that 80% of voters were annoyed that corporations and the wealthy don't pay their "fair share."

Polls rarely ask these people what a "fair share" looks like. Is a quarter of someone's earnings enough? A third? Because the rich have been shouldering an increasingly larger share of the cost of government. The United States already has one of the most progressive tax systems in the free world. Those who make over $207,350 now pay 35% in income tax. Those who make $518,400 or more pay a 37% income-tax rate. At some point, taxation should be considered theft.

You don't have to agree with me that (over)taxing the wealthy undermines job creation and growth, or that a tax system that relies so heavily on the fortunes of the few creates more cronyism in Washington and more volatility everywhere else. But the idea that the rich don't pay their "fair share" is absurd.

At this point in the conversation, progressives will set aside their calls for a "wealth tax" and start complaining about capital gains. Here, we simply have a point of disagreement: Ocasio-Cortez would see investment profits in the hands of Bernie Sanders, head of the Senate budget committee. I would rather see them in venture-capital projects and private-equity funds that churn investment dollars and boost technology and jobs. Progressives grouse about accumulation of wealth and then want policies that dissuade risk.

Those who believe what I do will be accused of being "market fundamentalists" or beholden to the wealthy. Progressives — the kind that like to hang out at Met Galas — believe everyone is as class-obsessed as they are. I don't give one wit about the wealthy. In fact, I hope today's entrepreneurs are tomorrow's new rich. We know they will be — without compelled redistribution. How many voters do you think know that nearly 70% of the Forbes 400 richest Americans are self-made? Or that the share of the self-made wealthy had risen from 40% in the 1980s to nearly 70% by the 2010s? How many people who have fallen for the scaremongering worries of "inequality" — another leading reason for the wealth taxation — understand, as economist Mark Perry recently pointed out, that the middle-class isn't "shrinking" because it's getting poorer, but rather because of a long-term trend in upper-middle class growth? Ocasio-Cortez's entire philosophy is a zero-sum fallacy.

No, progressive taxation isn't socialism. But the policy justifications made for tax hikes these days certainly are. Ocasio-Cortez is a fraud, of course, but it's her retrograde economic theorizing that's the real problem. And in this age of populism, increasing numbers of Americans are accepting Marxist conceptions of American life, in which the successful are parasites and everyone else is a victim of their greed.

The reality is that no politician is going to advocate raising middle-class income taxes, despite the ever-increasing cost of government. There is only the rich to tax. Consequently, it's become easier to pass massive expansions of the state. Everyone expects someone else to foot the bill — either future generations or their wealthier neighbors.

Meanwhile, taxation has gone from being a means of funding communal needs and projects to a means of technocratic wealth reallocation. This is no way to run a country.