It wouldn't have happened without Trump 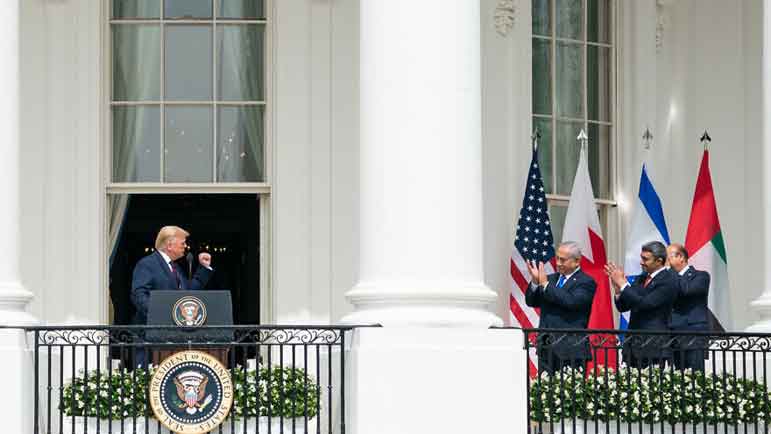 The gala signing of the normalization agreements between Israel and the United Arab Emirates and Bahrain was a bitter pill for the diplomatic establishment to swallow. The people who are counting on taking back control of American foreign policy after a Joe Biden victory in November could only look on with dismay as President Donald Trump presided over the sort of ceremony that they would have liked to have pulled off, but failed to do so when they had the chance.

The importance of the event as a game-changer in Middle East politics couldn't be denied. But the general reaction from veteran diplomats and the media was nothing like it would have been had a Democratic administration done as much. Most put a better face on it than the bitter and petty dismissal of a momentous event of House Speaker Nancy Pelosi, who initially dismissed the accords as a "distraction." But since there was no way to spin it as a negative event or to fit it into a narrative in which the president can be labeled as an irresponsible leader destroying the country and alienating the world, most of his opponents did their best to avoid having to discuss it.

That's why the most pertinent question to ask is how a man whose detractors regard him as ignorant on foreign policy and the details of the region could have accomplished such an important feat.

The answer is simple. Trump and his foreign-policy team succeeded because they ignored the experts and the conventional wisdom the establishment has been peddling for decades.

The president was confronted by two myths at the heart of U.S. policy in the Middle East.

One was the belief that ending Israel's conflict with the Palestinians was the key to solving the problems in the region and that a failure to satisfy their ambitions doomed the Jewish state to everlasting conflict with the Arab and Islamic world, while also complicating America's relations with those states.

The other is the conviction that the only way to produce progress towards peace was to exert pressure on Israel to make concessions to the Palestinians. Part of that formulation was the notion that it was also necessary to turn a blind eye to the Palestinian Authority's outrageous conduct, such as its corruption and financial support for terrorism.

All of Trump's predecessors accepted both of these positions as correct with the Obama administration being the most single-minded about putting the screws to the Israelis as part of its opinion that more "daylight" was needed between the United States and the Jewish state.

Trump rejected both of these ideas. But that was only made possible by his decision to assign the job of promoting Middle East peace to people with zero experience in diplomacy.

After Trump took office in 2017, few of his appointments were regarded with as much scorn as his decision to appoint Jared Kushner as his senior adviser and to have him lead the administration's Mideast peace efforts. But no matter what else he does in his life, Kushner should be remembered for helping to essentially end the Palestinian veto on the Arab world's making peace with the Jewish state.

Giving the Middle East portfolio to a wealthy former real estate magnate and part-time publisher struck the country's foreign-policy wise men as a joke. Kushner's primary qualification was his status as the husband of the president's daughter, Ivanka. All of the smartest foreign-policy hands of the last 50 years tried and failed to succeed in the region. Giving his son-in-law the job of realizing Trump's ambition to be a peacekeeper was treated as the stuff of satire.

The contempt wasn't limited to Kushner. Rather than provide him with veteran backup, the rest of his peacemaking team — chief negotiator Jason Greenblatt, Kushner's top aide Avi Berkowitz and U.S. Ambassador to Israel David Friedman — had no more diplomatic experience than he did.

All were also Jewish. While they weren't the first Jews involved in American Middle East diplomacy, those who did so generally came to their jobs as critics of Israel's government. None were outspoken supporters of Israel, as was the case with Kushner and his team.

Kushner persuaded Trump to work to hold the P.A. accountable for its support of terrorism. The Trump team also stood behind the president's decisions to move the U.S. embassy from Tel Aviv to Jerusalem and to ignore the expert's warnings that doing so would set the Middle East on fire.

When Kushner eventually unveiled the "Peace to Prosperity" plan earlier this year, it still offered the Palestinians an independent state and economic aid. But faced with the same kind of Palestinian rejectionism that had stumped previous negotiators, he focused on accomplishing the possible rather than the impossible.

Unlike Obama, who rejected the concerns of Saudi Arabia and the other Gulf states about his efforts to appease Iran, Trump and Kushner listened to them. Trump withdrew from the 2015 nuclear deal and implemented sanctions aimed at forcing Tehran to negotiate an end to its nuclear program and support of terrorism.

The Arab states had already established under-the-table ties with Israel, which they now view as a strategic ally against Iran. But by establishing a rapport with America's allies in the Gulf, including controversial Saudi Crown Prince Mohammad bin Salman, who could have thwarted moves by his neighbors, Kushner helped persuade them to take the next step and work towards full diplomatic and economic ties.

Only American officials who didn't play by the rules embraced by the foreign-policy establishment would have done any of that. And only a president like Trump, who distrusts "experts," would have agreed to go along with such a strategy. And it was only their choice to reject the tactics of the past that brought representatives of the UAE and Bahrain to the White House with the possibility that other Arab nations will do the same.

If Biden defeats Trump, can his team build on this success?

Perhaps, though the problem is that anyone who would be picked by Biden is almost certainly a believer in establishment conventional wisdom. The next administration is likely to return to efforts to create a rapprochement with Iran and to resume futile efforts to pressure Israel to persuade the Palestinians to make a peace that they have no interest in establishing.

If next January marks the end of the era of foreign-policy amateurs running things in the White House, the experts and their fans in the media will breathe a sigh of relief. But it is precisely because Trump and his team were amateurs not educated to treat establishment myths as revealed truth that the celebration at the White House was made possible.