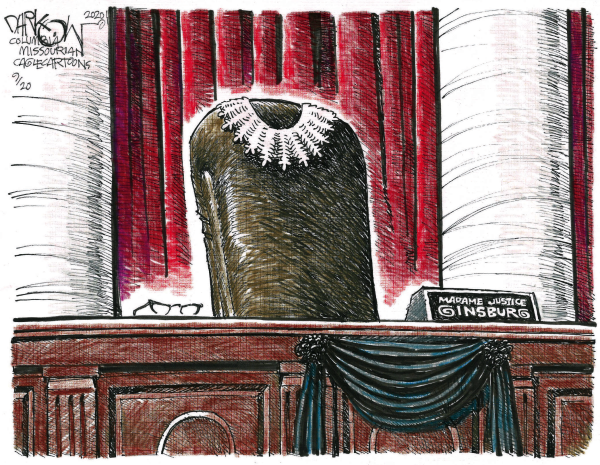 Well, the left waited about a minute-and-a-half to demonstrate appropriate reverence for its long-time hero:

f**k you for not retiring under Obama

f**k you for dying under Trump

If they even TRY to replace RBG we burn the entire f**king thing down.

Oh, goodie. Because my main complaint about 2020 has been its tedious social tranquility.

For what it's worth, I prefer the reaction of the President, who eschewed the f**ketty-f**ks to describe Ruth Bader Ginsburg as "a titan of the law". That's true, even if one is opposed to much of her jurisprudence. Where I most objected to Madam Justice Ginsburg was in her extra-judicial forays, which were unbecoming to a judge and diminished both her and her office. Here I am with Tucker a couple of years back, after Her Ladyship's extemporaneous analysis of the 2016 election. An election result is what it is: It speaks for itself. If a judge wants to dissect its psychological underpinnings, she should step down from the bench and get a gig with MSNBC. The Ginsburg moment starts about 2-15 in:

On paper, however, it was a different matter. Even if one disagreed with her decisions, they were generally very tightly argued - which is more than one can say for some of the third-rate identity-politics picks of recent years or the dismal and unreadable rulings of contemporary jurisprudence more generally. I have had cause to pore over many of her opinions in connection with both Michael E Mann's vanity lawsuit and Cockwombling Cary Katz's many kourthouse kamikaze raids. As her great friend Antonin Scalia put it, aside from what he called the "knee-jerk" stuff (abortion, identity-group rights-expansion), "Ruth's pretty good". When I'm on the witness stand, I am wont to cite her, and not merely as a crude head-fake to ingratiate myself with leftie judges but on the merits. For example, from last year's CRTV vs Steyn trial:

Do you recall that?

MITCHELL: Was he given his peerage before or after he served time in prison in Florida?

STEYN: As I said in my pleading to Mr. O'Neill, I believe the words I used were "he is an eminent Canadian historian, a member of the House of Lords, a Papal Knight, and in the United States a convicted felon" - for a case he took to the Supreme Court and where he won on all but one count, which the Supreme Court - Madam Ginsburg wrote the nine-zip opinion - remanding it back to the court in Chicago, and a sad and bitter and frankly pathetic Chicago judge nevertheless sent him back to prison.

But we own that, because in the rest of the common law world we think that's like a badge of pride.

MITCHELL: To serve time in prison in Florida?

STEYN: To serve time in prison for a crime that nobody in this room could actually explain and would not be a criminal offense in any other common law country... He fought that all the way to the Supreme Court. You can read Black vs United States. You can read the nine-zip decision by Judge Ginsburg...

Earlier, I'd cited her opinion in Taylor vs Sturgell (2008), on the circumstances in which a non-party in a nominal sense becomes as a practical matter the real party. I'll be citing her in Mann vs Steyn too, if that ever makes it to trial.

Also, on a sartorial note, I should add that I appreciate Sandra Day O'Connor and RBG, as the first lady justices of the Supreme Court, choosing to wear jabots (see above). It is the nearest thing to proper judicial garb on the shockingly underdressed bench of America's alleged high court. Elena Kagan, of course, has abandoned the tradition, so whether it survives Madam Justice Ginsburg's passing is doubtful.

What I loathe, however, is the very idea of a "Supreme Court nomination battle". When judges become that important, you've lost the plot constitutionally. There's no point throwing off one guy in ermine to prostrate yourself before nine guys in basic black, which effectively means five guys in basic black, which effectively means one guy in basic black - the designated swinger, which role John Roberts seems minded post-Anthony Kennedy to co-opt for himself. As I wrote fifteen years ago in The Irish Times:

Nancy Pelosi's job is leading the Democratic Party in the House of Representatives. They should have asked for references. Here's her reaction to the Supreme Court's recent and controversial decision on property rights: 'It is a decision of the Supreme Court,' said the minority leader. 'So this is almost as if G od has spoken.'

Good to know a San Francisco Democrat believes in the word of G od.

As it turned out, a day or two later G od handed in Her notice. On Friday Sandra Day O'Connor announced she was stepping down from the bench. On a Supreme Court divided otherwise evenly between a four-man 'conservative' and a four-man 'liberal' bloc, Sandra was the ne plus ultra of swing voters, the fifth vote on over a decade's worth of big 5-4 decisions.

George Bush may be, in media shorthand, 'the most powerful man in the world', but Swingin' Sandra was the most powerful woman in America, and that's what counts. She came to embody the court's perceived if largely self-invented role as the true parliament of the republic.

That God-has-spoken stuff, by the way, was not how Abraham Lincoln saw it: 'If the policy of the government upon vital questions affecting the whole people is to be irrevocably fixed by decisions of the Supreme Court. the people will have ceased to be their own rulers.' I'm with Abe.

Thirteen years on, a second Trump court nomination brought us to the Brett-Kavanaugh-the-Gang-Rapist I-believe-all-women-except-those-pawed-by-Joe-Biden phase of the republic's degeneration. Another two years on and the very possibility of a third Trump nominee is already inviting assassination threats. The pajama boys at Twitter, who routinely hide my Tucker and Sky News clips as "sensitive", are happy to let this one trend:

Get Mitch or Die Trying

Has NPR found an author of In Defense of Judicial Assassinations to interview yet?