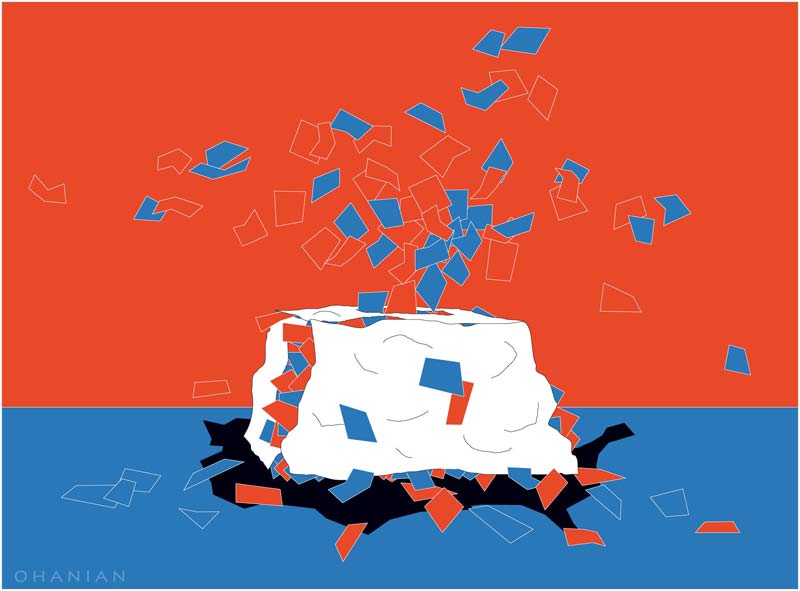 NEW YORK — A voting booth should be as confidential as a confessional. A mail-in ballot is wide open to filial force, peer pressure, and workplace bullying. Crooked Democrats demand this 7th inning rule change nationwide.

Back in March 2018, Hillary Clinton speculated that she lost for president because nasty men, who hate her, forced women to support Donald J. Trump.

Democrats "don't do well with married, white women," Hillary said. "And part of that is an identification with the Republican Party, and a sort of ongoing pressure to vote the way that your husband, your boss, your son, whoever, believes you should."

Hillary's claim generated derisive laughter and a well-deserved sense that she believes women cannot think for themselves.

But Hillary's point is not entirely baseless.

Just as some men beat women, others tell them how to vote. (And some henpecked men surely suffer likewise.) As long as local precincts let people vote in secret, however, such embattled Americans can escape such relationship woes and privately endorse the candidates and causes they choose, not those inflicted upon them.

"Unfortunately, survivors of intimate partner violence may be unable to make their voices heard in November due to barriers in the voting process, including fear of potential retaliation," the liberal Center for American Progress' Danielle Root wrote in 2018. "And for survivors who vote absentee and thus complete their ballots at home, voter privacy may be more difficult to guarantee, as abusers may have greater ability to access and monitor a survivor's vote selection."

Imagine that Mr. Jones tells his wife, "Your mail-in ballot better say Biden, or I'll smack you." Mrs. Jones cannot go to the polls and cast her ballot as she wishes. Instead, that woman's right to choose will be crushed. She will have no choice but to complete her ballot, let her live-in monster inspect it, confirm that she voted as he wanted, and then let him post it. Mrs. Jones could so little but lament her disenfranchisement.

Ditto Mr. Smith, whose wife insists on seeing if he voted "for The Donald" before grabbing his mail-in ballot, screaming, "You better have!" and then marching down to the Post Office to send it in — complete with the decisions that her suffering husband would have negated, had he voted in person.

Political harassers likewise could prey upon the elderly. Unscrupulous caregivers and cruel family members could perpetrate this on an individual level ("OK, Grandpa: Before you get your insulin, let's see your ballot.") This already happens on an industrial scope at nursing homes. This electoral elder abuse is called "granny harvesting."

How about America's thoroughly politicized campuses — where Cancelistas shout down or shut down conservative speakers? Leftist dorm-mates could corner outnumbered conservatives and command them to display their votes. Far-Right paranoia? Try to visualize a dozen College Republicans ganging up on a lone liberal for an impromptu ballot inspection. No, I cannot picture that, either.

Mass mail-in ballots also invite heavy-handed workplace tactics. Bosses or labor bosses could organize office- or factory-wide pow-wows where employees must arrive with their ballots and learn how to vote "the right way." And for those who resist? "I was considering you for that promotion, Maria. But your ballot gives me doubts."

Coercion aside, universal mail-in ballots threaten to silence millions. The U.S. Postal Service aspires to deliver 96 percent of political mail accurately. USPS would consider itself mission-compliant if as much as 4 percent of mail-in ballots went astray and never got tabulated. With some 80 million mail-in ballots expected in circulation, up to 3.2 million could go missing before USPS fretted. This Democrat formula for mass disenfranchisement easily could throw the race for the presidency one way or the other.

Couple this terrifying reality with mass-mail-in ballots' War on Voter Privacy, and this entire scheme becomes yet another defective product from the Democrat bad-idea factory.