Is it time to forget Benjamin Franklin? 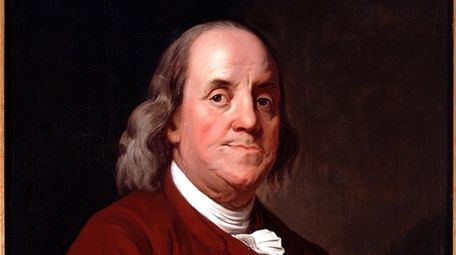 "Early to bed, early to rise, makes a man wealthy, healthy and wise," is a saying of Benjamin Franklin's, meaning he must have gone to bed early. Now, members of a Washington, D.C., governmental committee, wanting to defriend him sometime soon, can't even find their own beds. Maybe they are wealthy and healthy, but when they say they don't want any public building in the city to have his name on it, they are judgmentally impaired.

There I go, searching out euphemisms for these cancel-culture demons (not a euphemism) who think America is nothing to brag about, that our whole history is something akin to a Ku Klux Klan march. In D.C. right now, they have put together a list of some pretty extraordinary human beings whose duty is to disappear. What these foes of patriotism want is to disallow the names of all kinds of ex-presidents and founders on public office buildings, public schools and the like if they had anything to do with slavery.

And look, it's true that, before he became an abolitionist also serving the sick, the uneducated, those whose houses were on fire and a revolution that likely would have fizzled without him, Franklin owned slaves. He gave them up as he then gave in to excelling in everything from chess to athletics and turning the world around for the better.

What may not be as well-known about him is that he was one of the foremost scientists of the 18th century, the Enlightenment. Just about everyone knows the tale of his flying a kite in a lightning storm and of his later inventing the lighting rod, but do people know how he worked with others in investigating electricity to the extent of better enabling modernity to become modernity, of surrounding us with electricity's endless civilizational benefits?

At the same time, he was analyzing the Gulf Stream, rightly concluded that the common cold was spread by people and that lead was dangerous. He worked to give us the country's first hospital. He started something like a book club for young men and then went another step to help give us the first subscription library and an academy that became the first American university.

To assist people in getting along with everyday life, he started a volunteer fire department, a police force and devised ways to keep streets cleaner and better lit at night.

He was a lauded if anonymous columnist at the age of 16 and went on to draw maybe the first American political cartoon and write collections of witticisms, an autobiography of classic merit and other superb books. He mastered the newspaper business sufficiently to take one paper from the trash heap and convert it into the best-read paper in the colonies.

That made him rich enough to devote more time to philosophy and politics, and yes, he was vital in winning the Revolutionary War by getting aid from France. He was head of the class in framing and negotiating a treaty with the British in which they said, well, you know, you now have your independence. He edited the Declaration of Independence and was a major influence in the writing of the Constitution.

In a humble voice, he shared thoughts on how we could be free, flourish, maintain rule of law in an enlivened commercial society, sustain a republic by not letting it get too heavy and experience individual happiness while civically serving the common good.

He was a philosopher, a doer, a genius and a blessing.

Maybe the D.C. committee members think of him as just the inventor of bifocals and a stove, that kind of stuff. He is more nearly summed up as someone whose insights helped convert a stretch of wilderness into a continent of greatness lately veering toward wilderness again. I now have to go to bed.