Don't fall for the halo-effect of plant-based fast food 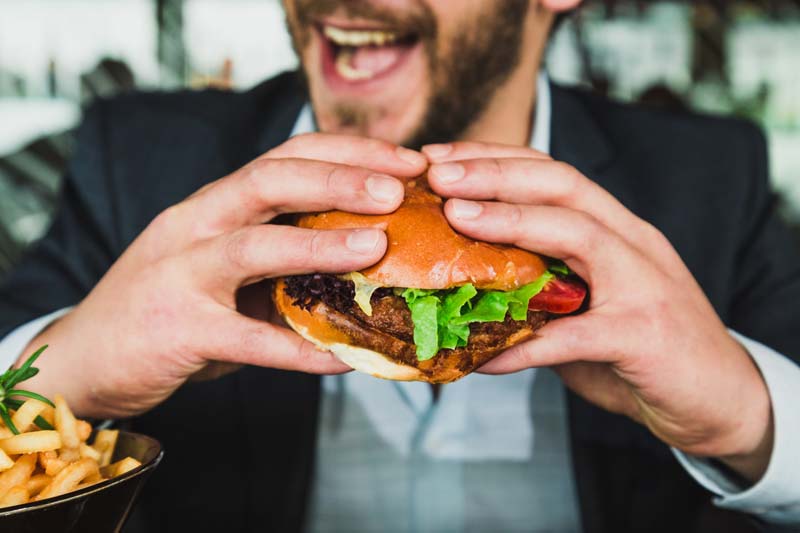 With many American consumers interested in reducing their consumption of animal products without becoming vegetarian or vegan, the food industry has come up with a new mantra: plant-based. Look around your grocery store, and you'll see a growing number of dairy, egg and meat substitutes bearing this label.

But the industry has taken liberties with the definition of "plant-based." Rather than focusing on whole foods such as vegetables, fruits, chickpeas and nuts, which is what health professionals mean when they recommend "plant-based eating," food manufacturers are developing ultra-processed burgers out of pea or soy protein, methylcellulose and maltodextrin, and liquid "eggs" out of mung bean protein isolate and gellan gum. Then they crown this ultra-processed food with an undeserved health halo.

Fast-food companies have joined forces with the manufacturers. Impossible Foods veggie burgers are on the menu at Burger King and White Castle; Beyond Meat is offering options for Subway's meatless meatball subs, Dunkin's meatless sausages, Del Taco's burritos and Carl Jr.'s meatless burger, and has just partnered with KFC to test out vegan fried "chicken"; and vegan JUST Eggs are being used in breakfast sandwiches at Tim Hortons (note, these items might not be available at all locations).

Plant-based ultra-processed products such as these are formulated to taste like the real deal. Thus, consumers can feel virtuous or principled for choosing plants over meat without sacrificing too much flavor. But is there any value to plant-based foods that have been crushed, extruded and shaped into facsimiles of the goods they are replacing? Let's look at that question through several lenses - considering nutrients, how processed the food is and how producing the food affects the planet.

When I was in nutrition school, the health value of food was mostly calculated based on the presence of desirable nutrients, such as fiber and vitamins, and on the absence of negative nutrients, such as sodium or trans fat. If you compare ultra-processed plant-based foods and similar animal-based foods solely on their nutrients, you'll find they are roughly the same.


Plant-based foods are purposely formulated to mimic animal-based foods, so plant-based milk is enriched with calcium and vitamin D to mimic cow's milk, while veggie burgers are rich in protein and made with iron and zinc to imitate beef. But they aren't always made to reduce the presence of less-healthy nutrients. Sometimes, the processed plant-based food will have more sodium than the processed animal-based food, and sometimes the animal food will be higher in calories or saturated fat. And vice versa. So, it's sort of a tie.

Consider this: A Burger King Whopper has 660 calories and 980 mg sodium, while the virtuous vegan version has 630 calories and 1080 mg sodium. Not much of a difference, right? You'd be better off making a burger at home, where it can be prepared to yield fewer calories and less sodium - whether it's vegan or not.

Interestingly, this nutrient-focused method of evaluating foods has fallen out of favor, because it doesn't give us the big picture. Health practitioners spent years vilifying fat, then sodium, and most recently sugar, and none of these factors alone seem to be the problem.

It's the whole diet that matters. Instead of a singular nutrient focus, many researchers evaluate the healthfulness of diets based on how processed their foods are, because studies show that's what has the greatest impact on human health.

To determine how processed a food is, researchers use the Nova food classification system, which separates foods into four categories: Unprocessed or minimally processed foods (fruits or eggs, for example); processed culinary ingredients (such as salt or butter); processed foods (usually two or three ingredients, such as in canned vegetables or salted nuts); and ultra-processed foods (industrial formulations with five or more ingredients, including sugar, fat, salt, protein isolates, flavor enhancers, stabilizers and preservatives). Thus, a whole apple is unprocessed, applesauce with sugar is processed, and apple cereal bars are ultra-processed. Note: All are "plant-based foods."

The average American consumes 58% of daily calories from ultra-processed foods. This high intake - even of foods that originally came from plants - is associated with a higher risk of metabolic syndrome, cardiovascular disease and some types of cancer. On the other hand, plant-based diets composed of whole foods (and specifically NOT ultra-processed plant-based foods) are associated with a lower risk of heart disease and Type 2 diabetes. It's always better to choose whole foods when possible.

Finally, some people opt for plant-based foods because they abhor animal cruelty or want to help decrease the environmental impact, especially with respect to greenhouse gas emissions and water use. Studies show greenhouse gas emissions are highest for meat and other animal products and lowest for most grains, fruits, vegetables and legumes. Pundits are quick to point out that food is a tiny contributor to greenhouse gases overall, and that most studies don't take recent efficiency improvements by animal farmers or organic farmers into account.

But overall, the weight of the research supports the notion that plant-based eating is better for the environment. Once you take food processing into account, the advantage becomes less clear. Bottom line: It's better to choose whole foods rather than ultra-processed foods, even when both come from plants.

Using the term "plant-based" on fast food labels is just another attempt by marketers to re-brand junk food. True plant-based eating doesn't mean opting for an Impossible Whopper in the drive-through or scrambling up some 15-ingredient plant-based "egg alternative." It means a diet that includes nourishing options such as black beans, broccoli and brown rice.

We're always looking for some magical way to eat junky food and achieve health. Don't be fooled by this plant-based pretense.

Previously:
• When chemicals are used to scare you about food
• How to decipher contradictory nutritional research
• Suspect a food allergy or sensitivity? Take these steps to find out
• The truth about 'Fat-burning', 'Immune-boosting' foods and 'No added sugar' products, Acid-neutralizing alkaline water
• The numbers that matter most in staying healthly
• In large quantities, health foods can do more harm than good
• Six foods to eat for a mood boost
• Keep your holidays happy by letting go of food guilt
• A dietitian's four favorite foods that are high in good fats
• Advice that has reached its expiration date
• Going 'lectin-free' is the latest pseudoscience diet fad
• When pills and injections can become downright dangerous
• 10 nutrition mistakes even really healthy people make
• Butter or olive oil? Eggs or no? New nutritional review cuts through the myths
• 8 tweaks to make good-for-you foods even better
• 'Healthy' sweeteners, protein-powerhouse quinoa and other nutrition myths, debunked
• Can't do vegetarian? Try flexitarian, which also has health benefits
• Five red flags that your 'clean' diet is going too far