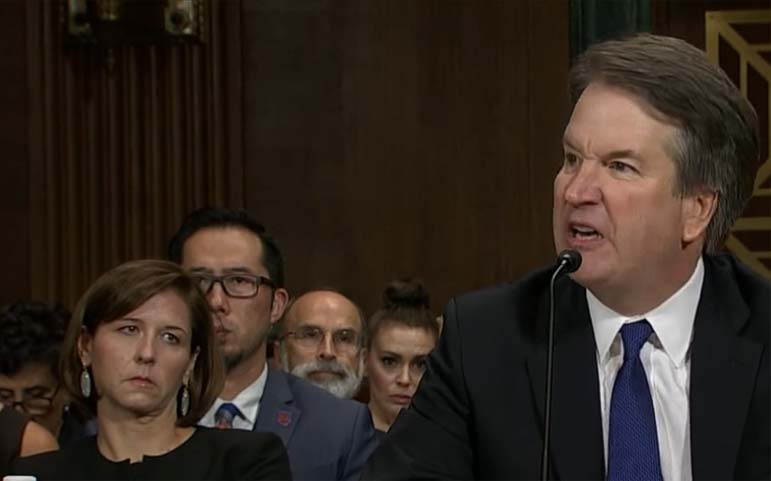 Thursday's hearing did not add an iota of corroboration to Christine Blasey Ford's allegations against Brett M. Kavanaugh. It remains true that none of the people Ford named, man or woman, has confirmed that the gathering in question took place at all, much less that any assault occurred. Ford says her friend Leland Keyser was at the party; Keyser may have told The Washington Post that she believes Ford, but that means nothing: As Kavanaugh pointed out, Keyser "said under penalty of felony she does not know me, does not ever recall being at a party with me ever." Ford was too young to drive but cannot recall how she got there or how she left — a big deal for those of us who remember the days before cellphones or Uber. She cannot recall whose house it was; she cannot recall the date.

The burden of proof is not on Kavanaugh to prove he didn't do it. He cannot prove a negative. In the United States of America, you are presumed innocent until proven guilty. But apparently not in the United States Senate. Asked before the hearing whether Kavanaugh deserved a presumption of innocence, Senate Minority Leader Charles E. Schumer (D-N.Y.) said, "There's no presumption of innocence or guilt when you have a nominee before you." That is simply un-American.

"This confirmation process has become a national disgrace," Kavanaugh declared. He's right: "The Constitution gives the Senate an important role in the confirmation process, but you have replaced advice and consent with search and destroy. Since my nomination in July, there's been a frenzy on the left to come up with something, anything to block my confirmation."

He called out Democratic committee members — like Sen. Cory Booker (N.J.), who called him "evil" — and accused them of unleashing the torrent of unfounded allegations. "Your words have meaning," Kavanaugh reminded them. "Millions of Americans listen carefully to you. Given comments like those, is it any surprise that people have been willing to do anything to make any physical threat against my family, to send any violent email to my wife, to make any kind of allegation against me and against my friends? To blow me up and take me down?"

The result, he said, is the "circus" we witnessed in the past 10 days. That is a tragedy, not just for him and for Ford, who, as Sen. Lindsey O. Graham (R-S.C.) said, is "as much a victim" as Kavanaugh. It is a tragedy for our democracy. Because after watching Kavanaugh be put through the gauntlet of personal destruction, good people of both parties will hesitate to answer the call to serve, and, as Kavanaugh said, "I fear that the whole country will reap the whirlwind."


Taken aback by Kavanaugh's decision call them out, and without any actual evidence to discuss, Democrats were reduced to asking Kavanaugh about references to vomiting and flatulence in his high school year book. Seriously? The world's greatest deliberative body has been reduced to this? As for Democrats' calls for an FBI investigation, their interest in an investigation is not to get to the truth; it's to stop Kavanaugh at all costs. If they wanted the bureau to review Ford's allegation, they should have come forward with that request more than a month ago.

Graham rocked the hearing room when he asked Kavanaugh whether he knew when he met with Sen. Dianne Feinstein (D-Calif.) on Aug. 20 that she had had these allegations for 20 days and had recommended a lawyer to Ford. The point, as Graham said, is that Democrats only want to drag this out so there is time for more fake accusers to come out of the woodwork. They want to run out the clock until the midterm elections, when they hope to retake the Senate and block Trump from putting anyone on the Supreme Court. And in the process, they want to "destroy this guy's life," Graham said.

Regardless of whether he is confirmed, Kavanaugh said, they have already done that. "I'll never get my reputation back," Kavanaugh said. " My life is permanently and totally altered." Whether our democracy is permanently altered depends on whether the Senate rejects this campaign of character assassination and confirms Kavanaugh. We'll find out the answer shortly.