The Word That Can't Be Questioned 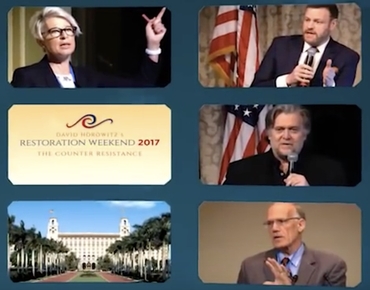 The Florida gubernatorial race is being portrayed as a Trump vs Sanders proxy fight with a far left Bernie bro running for the Dems and a Trump-supported congressman for the Republicans. So it is necessary for the media to find what they can to destroy the latter. The Washington Post has certainly got the goods on the GOP's Ron DeSantis - because he made the mistake of attending a conference whose speakers included ...um, me:

At the same conference, conservative author Mark Steyn praised Trump as the first politician to talk about immigration policy from the perspective of people already in the United States.

"The more diverse you get, the more stupid you get," Steyn said. "The more authoritarian you get .â€‰.â€‰. the more you need people to police diversity and to police cultural sensitivities. And eventually you end up as a totally moronic society.

The lack of closing quotes is in the original. Evidently Jeff Bezos has been laying off the sub-editors. But to the point content-wise:

Yeah, all that's true, I'd say. And it's interesting that the two reporters credited with the story don't bother suggesting why a chap shouldn't be permitted to attend a conference at which another chap advances such a proposition. As with the attempt to boot Tucker Carlson off the air because he asked the question "But why exactly is diversity our strength?", to query the state religion is an act of heresy that must be punished.

To his credit, Mr DeSantis' office has responded that he's not going to play "six degrees of Kevin Bacon" over everyone who happened to be in the room over the course of a three-day conference. Indeed, a good illustration of how diversity makes you stupid is the fact that it's now considered entirely normal that the only acceptable public gatherings are those where everyone agrees 100 per cent with everyone else present. No wonder American newspapers are the dullest in the English-speaking world (at least by comparison with, say, Pakistan).

Nevertheless, if we were minded to play "six degrees of Mark Steyn", there's far fewer between me and The Washington Post than between me and Mr DeSantis. In my theatrical days, the Post published pieces by me on what to go see on the West End stage, and they gave a rave review to Broadway Babies Say Goodnight - and their longtime columnist, listing the writers he'd hire for his ideal fantasy publication, included the following author, and not just for the showtune stuff:

And a few years after that they invited me to write obituaries for them (because theirs are boring and unreadable). I politely declined.

So, with all this guilt by association, maybe everyone at The Washington Post should join Ron DeSantis and kill themselves out of shame.

"Diversity", as I've said for the entirety of this millennium, is morally neutral. You can have half-a-dozen nice middle-aged middle-class NPR-listening ladies, and they're not in the least bit diverse. So you add Sudan's leading clitoridectomist. Now you're more diverse, but not necessarily the better for it.

Do that for long enough, and you wind up irredeemably stupid. A Mark Steyn Club commenter appended this response:

This, from Breitbart London and dated 9/11/18, pretty much sums up where the West is at since 9/11: 'Austria has rejected the asylum claim of an Afghan national who claims to be fleeing persecution for being homosexual after not being able to find any gay pornography on his mobile phone.' It sounds like the Babylon Bee, but isn't.

Incidentally, for a Pushtun goatherd or whatever he is, the Afghan guy isn't the least bit stupid: He's smart enough to know that claiming to be LGBTQWERTY gets you into the express check-in, so why not give gay taqiyyah (tagayyah?) a whirl?

Yet there is also a tragic, suicidal and sacrificial quality to our diversity stupidity:

'We took him in as if he were a son,' the girl's father said, according to the Bild tabloid newspaper. He has lost his only daughter. She was stabbed and killed by her former boyfriend, an unaccompanied refugee from Afghanistan.

I hear echoes of poor Maria Ladenburger's case in the reactions to other recent killings: we are tiptoeing very close to conscious child sacrifice in the cause of "diversity". As I reminded Louise Arbour and Simon Schama in the Munk Debate, with regard to their own societies, the differences between Quebec francophones and Ontario anglophones or between Irish Catholics and Protestants are, in the scheme of things, peripheral and footling. Yet they have caused profound intractable divisions that echo down the centuries. But relax, the differences between, say, secular Swedes and Afghan Muslims are gonna be a breeze ...because "diversity is our strength".

If you think saying that "diversity makes you stupid" should be verboten and render anyone within hearing ineligible for the governor's office, I took it to the next level a few years ago. From page 231 of The [Un]documented Mark Steyn (personally autographed copies of which are exclusively available, etc, etc):

"Diversity" is where nations go to die.

I dislike state ideologies, whether communism or fascism or the fluffier ones like "diversity". And, when the thought police insist you cannot say a word against them, that's all the more reason to speak up.