Are we on the verge of civil war? 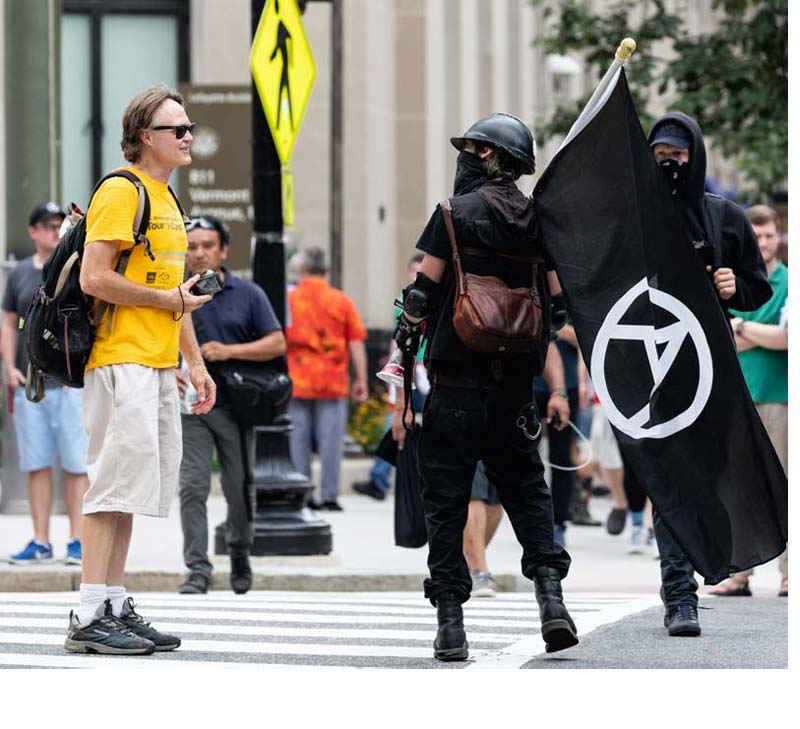 Members of Antifa march before a 'Unite the Right' rally in Washington, D.C. Cheriss May for Sipa USA

It seems the country is back to 1860 on the eve of the Civil War, rather than in 2018, during the greatest age of affluence, leisure and freedom in the history of civilization.

The ancient historian Thucydides called the civil discord that tore apart the fifth-century city-states "stasis." He saw stasis as a bitter civil war between the revolutionary masses and the traditionalist middle and upper classes.

Something like that ancient divide is now infecting every aspect of American life.

Americans increasingly are either proud of past traditions, ongoing reform and current American exceptionalism, or they insist that the country was hopelessly flawed at its birth and must be radically reinvented to rectify its original sins.

No sphere of life is immune from the subsequent politicization: not movies, television, professional sports, late-night comedy or colleges. Even hurricanes are typically leveraged to advance political agendas.

What is causing America to turn differences into these bitter hatreds -- and why now?


The internet and social media often descend into an electronic lynch mob. In a nanosecond, an insignificant local news story goes viral. Immediately hundreds of millions of people use it to drum up the evils or virtues of either progressivism or conservatism.

Anonymity is a force multiplier of these tensions. Fake online identities provide cover for ever greater extremism -- on the logic that no one is ever called to account for his or her words.

Speed is also the enemy of common sense and restraint. Millions of bloggers rush to be the first to post their take on a news event, without much worry about whether it soon becomes a "fake news" moment of unsubstantiated gossip and fiction.

Globalization has both enriched and impoverished -- and also further divided -- America. Those whose muscular labor could be outsourced abroad to less expensive, less regulated countries were liable to lose their jobs or find their wages slashed. They were written off as "losers." Americans whose professional expertise profited from vast new world markets became even richer and preened as "winners."

Lifestyles in and are so different that it's almost as if they're two different planets.

Legal, diverse, meritocratic and measured immigration has always been America's great strength. Assimilation, integration, and intermarriage within the melting pot used to turn new arrivals into grateful Americans in a generation or two.

But when immigration is often illegal, not diverse and massive, then balkanization follows. Currently, the country hosts 60 million non-natives -- the largest number of immigrants in America's history.

Yet unlike the past, America often does not ask new immigrants to learn English and assimilate as quickly as possible. Immigration is instead politicized. Newcomers are seen as potentially useful voting blocs.

Tribalism is the new American norm. Gender, sexual orientation, religion, race and ethnicity are now essential, not incidental, to who we are.

Americans scramble to divide into victimized blocs. Hyphenated and newly accented names serve as advertisements that particular groups have unique affiliations beyond their shared Americanism.

America is often the target of unrealistic criticism -- as if it is suddenly toxic because it is not perfect. Few appreciate that the far worse alternatives abroad are rife with racism, sexism, civil strife, corruption and poverty unimaginable in the

The last few elections added to the growing abyss.

The old and is now trending into a radical democratic socialist party. Meanwhile, the old is mostly gone, replaced by tea party movements and the new base.

Former President came into office from with the most left-wing voting record in the . Trump was elected as the first president without either prior military or political experience.

Obama issued dozens of controversial "pen and phone" executive orders, bypassing . And Trump is systematically overturning them -- doing so with similar executive orders.

keep dividing and soon resort to open violence, as happened in 1861? Or will Americans reunite and bind up our wounds, as we did following the upheavals of the 1930s Great Depression or after the protests of the 1960s?

The answer lies within each of us.

Every day we will either treat each other as fellow Americans, with far more uniting than dividing us, or we will continue on the present path that eventually ends in something like a hate-filled , or the Balkans.