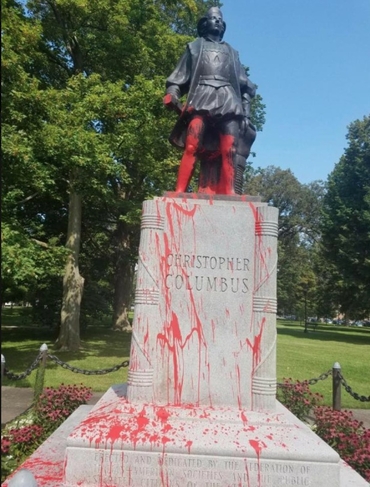 A week ago, I suggested that, sixteen years into "the war on terror", we were making the same mistake as the British at Singapore and pointing our guns in the wrong direction. The only difference is that we've been doing it for a decade and a half and don't seem to notice that, while we've been firing straight ahead, our buttocks have been entirely blown off. So we continue to run around the Hindu Kush in order that, in the President's words, terrorists will "never again have a safe haven" in Kandahar or Jalalabad, while simultaneously allowing them ever safer havens in Manchester and Brussels and Paris and Stockholm, Ottawa, Orlando, Sydney...

I've tried to ease up on the "As I wrote some years ago..." shtick, not only because it irritates some readers but because it sows the fatal seed in my own self-doubting breast that I've said it all before and it made no difference. But there is a section in America Alone about the need for countries at war to use all elements of national power. And my concluding chapter begins by saying:

This book isn't an argument for more war, more bombing, or more killing, but for more will.

Or for more "cultural confidence", as I call it in the ensuing paragraphs. That was eleven years ago. But the void on the culture front was obvious even earlier. My 2002 book "The Face of the Tiger" (yes, yes: "as I wrote even more years ago") includes the following:

President Bush has won the first battle (Afghanistan) but he's in danger of losing the war.

Well, we are losing. I think that's undeniable. But why is that? Well, we have the best trained and most technologically advanced military - and nothing else:

Against that are all the people who shape our culture, who teach our children, who run our colleges and churches, who make the TV shows we watch - and they haven't got a clue. Bruce Springsteen's inert, equivalist wallow of a 9/11 album, The Rising, is a classic example of how even a supposed 'bluecollar' icon can't bring himself to want America to win. Oprah's post-9/11 message is that it's all about who you love and how you love'. On my car radio, John McCain pops up on behalf of the Office of Civil Rights every ten minutes sternly reminding me not to beat up Muslims...

The Islamists are militarily weak but culturally secure. A year on, the West is just the opposite. There's more than one way to lose a war.

I wrote that in August 2002. Obviously, the idea of a "war" subcontracted to an elite professional soldiery while consciously forswearing all other levers of national power (including immigration policy) would have struck any strategist from 50, 100, 200, 400 years ago as entirely absurd. Yet it has persisted for a decade and a half, to the point where the remnants of the hot war - the behind-the-scenes special-forces action in the Islamic State; the periodic shootouts between Nato forces and our Afghan "allies" - actively obstruct clearheaded thinking on the far more vital cold war.

William Kilpatrick expands that point in a sharp essay on the big picture. He begins with a blunt statement of where we're headed:

Europe is currently in the process of submitting to Islam, and America also seems destined to eventually submit. If you have young children or grandchildren, it's likely that they will have to adapt at some point to living in a Muslim-dominated society. It won't necessarily be a Muslim-majority society because, as history testifies, Muslims don't need a majority in order to successfully take control of non-Muslim societies.

If and when Islam persuades America to submit, it most probably won't be through force of arms. The civilizational struggle in which we are now engaged is primarily a culture war. America used to be good at cultural warfare because America once had cultural confidence. The Cold War was in large part a cultural war, and America won it because it didn't have qualms about demonstrating the superiority of the American way to the Soviet way.

But times change. These days, may Americans would rather shred their culture than spread it. Cultural shame rather than cultural pride rules the day. And, not surprisingly, people who are ashamed of their culture can't be counted on to defend it.

That's true. The Dallas School Board has smoothly progressed from chiseling the names of Confederate generals off its schools to "studying" whether also to remove the names of Jefferson, Madison and Franklin. Without whom there would be no such thing as America. Indeed, without whom there would, in a certain sense, be no you. The erasure of your total civilizational inheritance turns everyone into "Dreamers" - blank slates who find themselves in America through mere quirk of fate, and for whom the great Republic is no more than a geographical location. Or if you prefer, Un-Anchored Babies: You can be born here, but, if the entirety of your culture has been wiped clean, what's the diff? Once Jefferson and Madison and all the rest are gone, a kid whose great-great-great-whatever got off the Mayflower is no different from the child of Mexican drug smugglers: we are all children of Year Zero.

This psychosis isn't confined to America: In London Lord Nelson is feeling the heat, and in Canada Sir John A Macdonald. The Guardian wants to topple a statue of H G Wells. Wells' political views are not mine - but, in the fullness of his life, he got some things wrong and some things spectacularly right. That's not good enough for the thought police: 19th century men, and 18th century men, and 16th and 13th and back through the millennia, have to get everything right by 2017 standards - or their statues must be guillotined:

Robert E Lee must be toppled because he was racist. Thomas Jefferson must come down because he owned slaves. Christopher Columbus has to go because he had no transgender-bathroom policy on the Nina, Pinta and Santa María. The mobs in the street have no idea who these guys are - except that they are not like them, and so cannot be permitted to stand.

William Kilpatrick is correct: A culture that will not defend its past is unlikely to defend its future. Indeed, it may be so obsessed with contempt for its past that it can no longer even discern threats to its future. Or, come to that, threats to its present. We see this in the urge to flush attempted mass murder on the London Tube down the memory hole as swiftly as possible. Why exactly is it so necessary to cast the Parsons Green terror attack out of your mind?

Because any useful conversation on the subject would necessarily involve "refugee" policy, and broader questions of immigration and assimilation.

And that's controversial because you'll get accused of being a racist.

And that's career-ending because you come from a country where H G Wells said some beastly things about brown people a century ago.

And that's utterly shameful because, although your nation gave to the world Magna Carta and Common Law and Shakespeare and a Royal Navy that did more than any other institution to expunge slavery from the planet, and notwithstanding that even in the crappiest crapholes like Zimbabwe almost everything that still just about works in that dump comes from your country, your history is less than 100 per cent perfect.

And that's cringe-worthy because you've been raised in a culture that doesn't teach you about any of the good stuff, only to spasm reflexively when accusers cry "racist!" or "imperialist!", "Islamophobe!" or "transphobe!"

And that's life-threatening because, after a generation or two, it seems entirely normal to accept that, as penance for crimes you have never committed, it is necessary to surrender your civilization to barbarians.

Military victories in the deserts of Araby or the White Mountains of Afghanistan are irrelevant to this psychosis. As Mr Kilpatrick puts it:

Americans began to think of the war against jihad as primarily a military affair. In the process of defeating the enemy on the battlefield, we lost sight of the cultural side of the struggle.

That "cultural side" includes everything from mass Muslim immigration to foreign funding of mosques and madrassahs and "Middle Eastern Studies" programs at universities. But you can't resist a profoundly alien and illiberal culture if you don't have a culture of your own - which brings us back to the Dallas School Board's planned eviction of Jefferson, Madison and Franklin: When you demolish your own inheritance, the lot does not stay empty. Something arises in its place. As noted elswhere, the left thinks it will be LGBTQWERTY; Islam figures that that blancmange statue to one's own appetites will topple far more easily than Robert E Lee or Stonewall Jackson.

To win "the cultural side of the struggle", certain things are required. For a start, more people have to stand up under their own names; as Kathy Shaidle has observed, there's nothing more impotent than butching it up on the Internet as "Sh*tlord3000". It's worse than useless - not only because it increases the burden on those few who do append their own names, but because it confirms the leftist critique that these ideas are somehow shameful and illegitimate and thus can only be advanced anonymously. So the macho pseudonyms with the warrior avatars are less helpful than if Fred the accountant or Mabel the feedstore clerk said it. The left wants to keep dissent in the shadows; anonymity plays by their rules. One of the reasons that Donald Trump won the election is that, whether by instinct or calculation, he said "I'm going to go on stage and stand between Jeb and Marco and say the things that most people only say furtively and off the record." There's a lesson in that.

Second, we can only defeat the oncoming future by winning the past: There's nothing controversial in saying you prefer Magna Carta to Sharia. Even the flakiest snowflake doesn't wish to live under the latter. The point about Cromwell's injunction to his portraitist to paint him "warts and all" is that he knew he could withstand the scrutiny: even with warts, he's still Cromwell, and you're not. Even with warts, we're still the civilization that built the modern world. And that doesn't change even if you quintuple the warts.

Third, we have to stop being so parochial about particular bugbears. An atheist, for example, may sincerely loathe all religions, but should have sufficient of a survival instinct to recognize that his atheism is more genially tolerated by Christianity than it ever will be by Islam. The truth is that atheism is a very minor sub-sect of the skepticism and curiosity that defines Judeo-Christian societies and their attendant triumphs in science and the arts, and is notable by its wholesale absence from the Muslim world. So an unwillingness to defend the inheritance that gave us the cathedral at Chartres and the Mozart Requiem and Botticelli's Madonna of the Book and "All Things Bright and Beautiful" is ultimately as ignorant an act of vandalism as that of the grunting morons tearing down Johnny Reb in Durham.

But "the cultural side of the struggle" is what will determine it, not unmanned drones in the North-West Frontier Province. As long as the home front is dominated by unmanned drones droning on about the evils of the western inheritance, we're going to lose. The real battleground was never Raqqa or Kabul; it has always been New York and Paris, London and Rome.