Are All Millionaire Athletes Really That Dense? 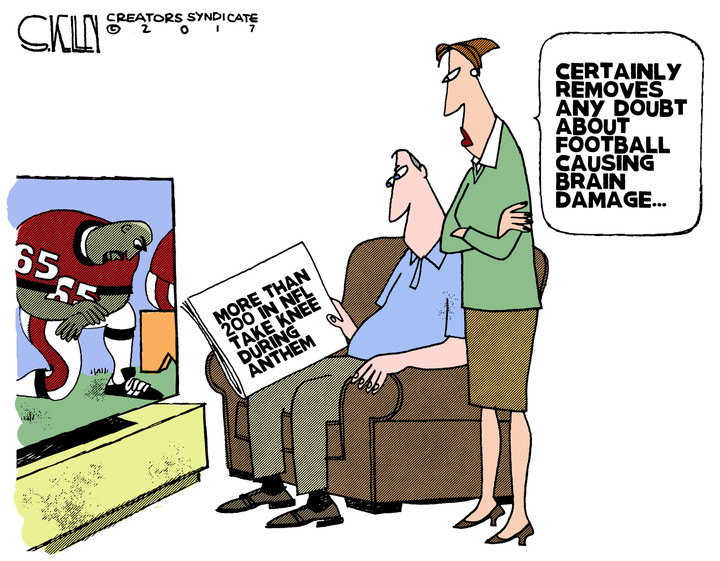 With all the brouhaha about the athletes kneeling during the national anthem, I haven't seen much reporting on why they are protesting.

Social justice for blacks has been mouthed as the reason but that makes no sense coming from wealthy individuals who have been rewarded greatly for their talents. Much of this flawed narrative arose after the shooting of Michael Brown in Ferguson, MO. and the media misreporting led to the Black Lives Matter movement.

Black athletes starting wearing BLM t-shirts and holding up their hands shouting "Don't shoot" even though this version was based on a lie.

Back in June 2015, I wrote, "When Michael Brown was shot by a white cop in Ferguson, his friend lied that Brown had his hands up to surrender but forensic evidence proved otherwise. Nevertheless the media and dumb celebrities started promoting and wearing 'Hands up, don't shoot' t-shirts and every time, their pictures showed up all over the press. Riots followed and the town burned down."

There were a few journalists who tried to weed out the truth and even CNN's Don Lemon expressed doubt that the prevailing narrative was what actually happened.

That sensibleness didn't last long as the left wing ran with the media hype that ended up targeting all cops.

As far as I'm concerned, the deaths of those martyred police officers slain in NYC and Dallas by deluded haters fall squarely on the mainstream media and the left.

Do these glorified prima donnas in the NFL even know what racism is?

If America is so steeped in racial inequality, then how on earth are there so many multi-millionaire blacks in sports?

Are they intellectually lazy or just plain stupid? Certainly those fading celebrities joining hands with the dumb jocks in solidarity are all millionaires as well. Do I really care what any of them think?

The liberal left has succeeded for many years in hiding historical facts to suit their racial attacks on conservatives. It's easy to do if you've commandeered the world of academia so that our youth know only what is broadcast by the mainstream media, social media and compliant celebrity know-nothings. Just about everything that's learned today about the civil rights movement has been manufactured by the political left to promote the demonization of the right.

How many know that Rosa Parks was not the first black woman to refuse to give up her seat in the segregated South and be arrested? A 15 year-old Claudette Colvin was arrested in Montgomery for refusing to give up her seat to a white passenger. Three other women ran afoul of the bus segregation law before Parks and the four were plaintiffs in the Browder v. Gayle case that resulted in the Supreme Court ruling bus segregation unconstitutional.

Ms. Parks was a civil rights activist and knew that the NAACP was looking for a lead plaintiff in a case to test the constitutionality of the Jim Crow law. This shouldn't negate her courage in the incident but Ms. Colvin deserves to be just as much an icon as Rosa Parks.

Has anybody bothered to note that all those confederate statues that are being torn down or vandalized were erected by the Democrats; that it was the Democrats who started the KKK and wrote the Jim Crow laws; that it was a Democrat President, Woodrow Wilson who established segregation in the federal government: that more Republicans voted for the Civil Rights legislation that was filibustered by Al Gore Sr.

"I shall never fight in the armed forces with a negro by my side ... Rather I should die a thousand times, and see Old Glory trampled in the dirt never to rise again, than to see this beloved land of ours become degraded by race mongrels, a throwback to the blackest specimen from the wilds."
--- Robert C. Byrd, in a letter to Sen. Theodore Bilbo (D-MS), 1944

To the liberal left and its minions in the media, racists today are the deplorables who voted for Donald Trump, who had been such a champion of civil rights that he has been lauded by Jesse Jackson and the NAACP.

I have no problem with anyone in public life demonstrating their political positions even if based on false information. Just as they have a constitutional right to do so, I also have the right to find their lack of respect for our nation offensive and to withdraw my support for them.

The president is correct in pointing out that the real offense in not standing for the anthem is not about race but about disrespect for a nation that has enriched them greatly.

Considering the fact that so many professional athletes have degrees from colleges and universities, their eagerness to embrace a discredited narrative is just further proof of the piss-poor education now meted out by the Marxist academia.

Not all athletes are dense but those who've participated in the kneeling game certainly are.