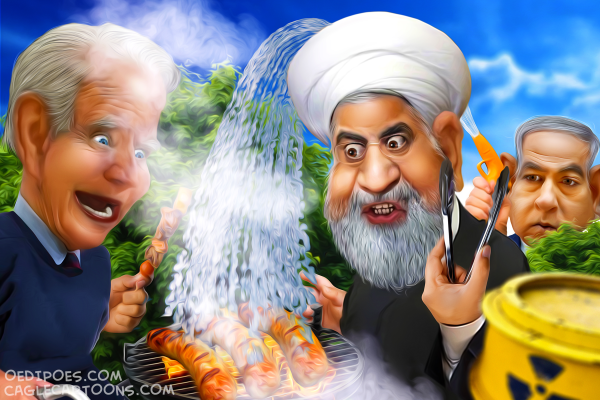 Since taking office, President Joe Biden and his top advisers have made it clear that there is almost nothing Iran can do to get his administration to rescind its offer to negotiate a return to the 2015 nuclear deal that Biden's predecessor abandoned. Thankfully, that might finally be changing.

On Wednesday Iranian Supreme Leader Ayatollah Ali Khamenei trashed his government's past nuclear negotiations in front of the outgoing and incoming presidents. He told the new president he should learn from his predecessor's experience not to trust the West.

In a statement responding to those remarks, the State Department repeated that it was sincere in seeking a negotiated settlement to return to the deal — which would limit Iran's nuclear enrichment for another nine years and remove the most biting secondary sanctions on Iran's economy. That has been boilerplate for the Biden administration since January. This time though, it added a veiled threat: "That opportunity will not last forever."

It may well be that the change is motivated by a flawed understanding of Iranian politics. As Axios reported this week, the Biden administration is worried that Iran's new president, Ebrahim Raisi, a fanatic jurist responsible for sentencing thousands of political prisoners to the gallows in 1988, will take a hard line in nuclear talks. The outgoing administration of President Hassan Rouhani negotiated the nuclear deal in 2015.

But there has never been a hard-line/moderate dichotomy. Khamenei has the real power in Iran, and he approved the deal, just as he now appears to be souring on the prospect of returning to it. Raisi was elevated to head the Justice Ministry in 2019, remember, as part of Rouhani's allegedly moderate government.

A better rationale for not returning to the Iran talks are the growing signs that Khamenei's regime is wobbly. It is failing to meet the basic needs of its people. Earlier this month, protests broke out in Khuzestan province over the failure to provide drinking water. This week, demonstrations spread to Tehran. Some videos of those protests showed Iranians calling for Khamenei to resign, just as the protests in 2018 and 2019 called for his ouster.

Some protesters are angry because Iran's electricity grid can't keep the power on. This round of demonstrations began because of water shortages. But in the last four years, other state failures have brought Iranians out to the street. In 2017 and 2018 it was failed banks, which wiped out the savings of average Iranians, that prompted national protests. In 2019, it was the fact that state security services shot unarmed demonstrators. In 2009, it was a stolen election.

It's tempting to posit that U.S. sanctions are what's keeping Iran's regime from providing basic services to its people. But this is too simplistic. The banking crisis of 2017 and 2018 occurred while Iran was enjoying the benefits of the 2015 nuclear deal. Sanctions didn't force the state security services to shoot peaceful protesters, nor did they force developers in Khuzestan to divert drinking water from the population to drill for more oil. These were the choices of a corrupt and cruel regime.

So Biden now has an opportunity. He should follow up on the State Department statement this week supporting Iranian protesters and offer U.S. technical support to help activists get around the country's Internet blackout and slowdown. He should rally European governments to join in his solidarity campaign for the Iranian people. He should consider creating a modest fund for the families of Iranian workers going on strike. He should build on the last administration's work to reach out to Iranians on social media.

The overriding goal of all this outreach, and the main objective of the president's Iran policy, should be to support the efforts of Iran's people to achieve a democratic transition. The alternative to this approach is to patiently cajole an ailing supreme leader to limit his nuclear program while his ailing country collapses around him.