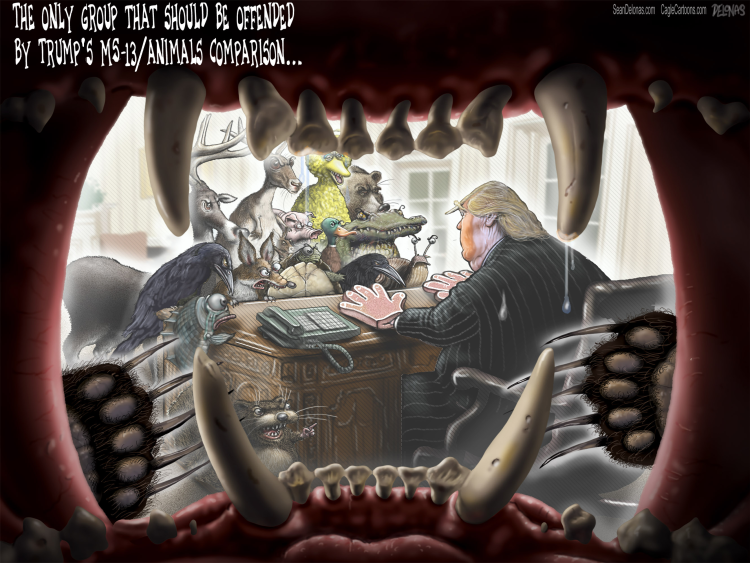 MS-13 is a boogeyman used by the lying, racist President Donald Trump to scare people about illegal crossings at the southern border and don't listen to him — or so say leftist politicians, let's-pretend journalists and puzzling professors.

At least these people do not grab you, slice you to death with their machetes, bang your head with baseball bats or, as in one recent incident, carve out your heart. That's what happened in California, and 19 of the 22 MS-13 gang members accused of this barbarism crossed the southern border illegally in recent years. While you may agree with House Speaker Nancy Pelosi that walls are evil, the term is more nearly applicable to freak-show politics.

What we have here is a threat of the left, not just in recent border inanities, but in antifa activists whose masks scarcely hid their brutality when they recently beat a conservative journalist until his brain bled. Then one antifa loyalist tried to blow up a detention facility because it was run by ICE.

It is not doing for others to say come one and all with essentially open borders and a dread of deporting people already found askew of the law. It is not doing for others to belittle ICE, which protects us while sanctuary cities endanger us with the excuse that if you enforce the law it makes it harder to enforce the law. Democrats share the blame for what these MS-13 criminals did and should at least visit the graveyards of their victims.

I am sick and tired of leftists calling everyone a racist who happens to be a white American and wish I did not have to endure the bigotry of many of them toward Christians, the rich (except for themselves), conservatives, corporate chiefs and major chunks of the white working class.

Obviously, there are bad conservatives and what does it matter that Trump helped build a great economy especially benefitting black Americans and women? After all, Democratic presidential candidates mostly want less liberty in order to facilitate socialistic practices reducing the human soul as much as it does the economy, if there is still such a thing left after the Green New Deal.

Yes, Republicans and Trump have issues, but they are not alone.