The Priorities of US Justice 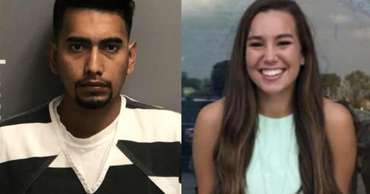 An American woman and her killer.

News from the justice system:

Jakiv Palij, a 94-year-old concentration-camp guard, is in Germany tonight, having been arrested by ICE agents at his home in New York and deported from the United States. His deportation order was issued in 2004, so it only took twice as long to enforce it as the war in which he committed his crimes. And this for one of the few offenses specifically spelled out to this day in US immigration paperwork: "Between 1933 and 1945 were you involved, in any way, in persecutions associated with Nazi Germany or its allies?" If so, don't worry, because we'll take two years longer than the entire twelve years of Nazi rule to enforce the deportation order.

Also today, the body of poor, twenty-year-old Mollie Tibbetts was found in an Iowa cornfield. She went jogging in one of those small towns where everybody knows everybody and they leave their doors unlocked. But she ran into an "undocumented" immigrant and he killed her, and her parents will live with that hole in their hearts till the day they die. The AP's Zeke Miller played it for laughs:

Likely coming to a Trump rally near you.... Investigators: Suspect in Mollie Tibbetts death is in custody, subject to immigration detainer.

Funny. Or, per MSNBC, Mollie Tibbetts is "some girl in Iowa Fox News is talking about". Because, as the pajama boys at Mediaite will tell you, only "racist fear mongers" are boorish enough to make a fuss about homicidal illegal aliens. It's no surprise that a bureaucracy that can't deport a Nazi in fourteen years cannot reliably inform its citizens just how long Mollie Tibbetts' killer has been in the country. He broke into a nation that has supposedly been on "orange alert" since September 12th 2001, but the authorities cannot tell us when he did it - except that he's been here "between four and seven years". Close enough for government work.

That's why Trump got elected - not just the murders, but the media diversity commissars telling you you're not allowed to notice the murders. To the American media, and its judiciary, and one-and-a-half of its political parties, what matters is to make it impossible not only to deport the likes of Mollie Tibbetts' killer but to stop importing more of them, day by day by day.

And so the Deep State decided to undo Trump's election. That's why it will be another two cases you'll be hearing about round the clock on CNN and MSNBC - the conviction of former Trump campaign chairman Paul Manafort and the guilty plea of Trump lawyer Michael Cohen in the Southern District of New York. Neither of these cases are about anything other than the steamrollering caprices of federal power. I've been consistent in my contempt for the US criminal justice system since attending the Conrad Black trial a decade ago. So I found something moving and admirable in Manafort's decision not to put on any defense for various ancient and cobwebbed tax-code infractions he's only being prosecuted for because he refused to "cooperate" with Robert Mueller.


It was a noble stand - particularly when you're looking at two centuries in gaol. So today he beat the rap on ten charges and was convicted on eight others. That was something else I noted in Conrad's case - the multiple-charge racket. In the Black case, he prevailed on nineteen-twentieths of the US Attorney's case, but the one-twentieth he didn't win was enough to ruin his life. That's how it goes with multiple-charge bingo: You have to win on all; they have to win on just one.

Cohen, who's on the hook for some bollocks to do with New York taxicab medallions in the early years of the century, doesn't want to be Paul Manafort, heroic but doomed. So he's gonna sing. Because that's how the game is played. Because, if you do as Manafort did and insist on the right to confront your accuser in open court, you're up against worse odds than Pyongyang District Court: The United States Government wins 97 per cent of the cases it brings to trial. Because they buy their witnesses - as they did with Gates in the Manafort case, and as they've done (to one degree or another) with Cohen in the Trump case. There's a word for this, and it isn't justice.

That brings us to another of Mueller's minnows: George Papadopoulos. Young Papadopoulos, like Cohen, also pleaded guilty in exchange for a deal from the feds. Now Mueller is recommending six months in gaol for Papadopoulos because he did not provide "substantial assistance" to Mueller in the Trump case. He sang, but his song was insufficient. When you're in that situation, you're supposed to know you're meant to embellish the singing with a few grace notes - a few melismatic ululations that oomph up your non-"substantial" song into something more useful to the prosecutor. This is corrupt and shameful.

On the other hand, Debbie Wasserman Schultz's IT honcho Imran Awan has "suffered enough" and so gets three months' supervised release. Gee, it's almost like equality before the law got repealed in this country.

Papadopoulos' wife Simona is an Italian lawyer and, underneath the charming accent, a smart cookie aghast at seeing how the bologna is made Washington-style. She's been making the rounds in recent days suggesting her hubby may withdraw his plea deal. I hope he does. There is no reason whatsoever for him to be looking at six months behind bars.

But this is what federal money-no-object justice brings you: A Nazi has to get half-a-decade shy of his hundredth birthday in order to live long enough to have his deportation order enforced; young itinerant Mexican murderers can break into a nation on orange alert, and the all-seeing Security State can't tell you when they did so to within three years. But George Papadopoulos? Him we can get.