The truth will set us all free 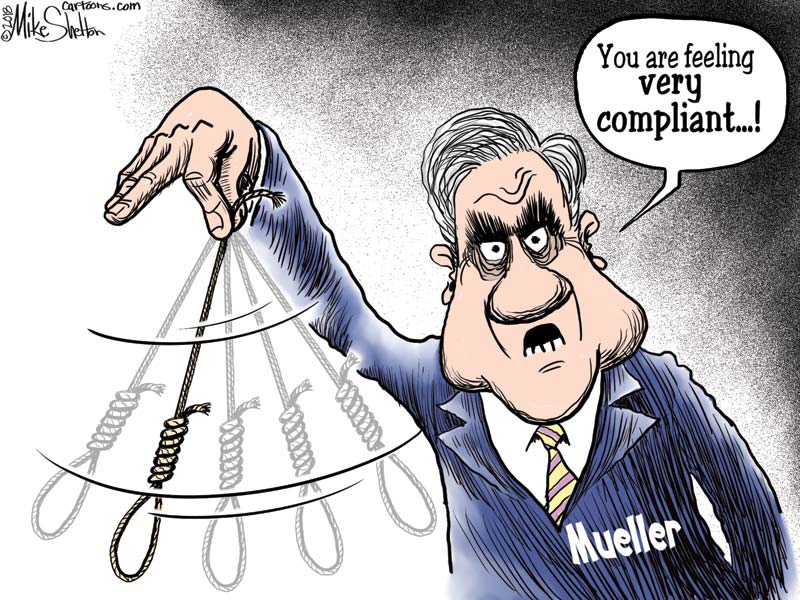 Special counsel investigation was star-crossed from the start. His friend and successor as FBI director, , by his own admission prompted the investigation -- with the deliberate leaking of classified memos about his conversations with President to the press.

Mueller then unnecessarily stocked his team with what the press called his "dream team" of mostly Democratic partisans. One had defended a employee. Another had defended the .

Mueller did not at first announce to the press why he had dismissed Trump-hating FBI operatives and Peter Strozk from his investigative team. Instead, he staggered their departures to leave the impression they were routine reassignments.

But Mueller's greatest problem was his original mandate to discover whether Trump colluded with the Russians in 2016 to tilt the election in his favor.

After 15 months, Mueller has indicted a number of Trump associates, but on charges having nothing to do with Russian collusion. They faced inordinately long prison sentences unless they "flipped" and testified against Trump.


We are left with the impression that Mueller cannot find much to do with his original mandate of unearthing Russian collusion, but he still thinks Trump is guilty of something.

In other words, Mueller has reversed the proper order of jurisprudence.

Instead of presuming Trump innocent unless he finds evidence of Russian collusion, Mueller started with the assumption that the reckless raconteur Trump surely must be guilty of some lawbreaking. Thus, it is Mueller's job to hunt for past crimes to prove it.

While Mueller so far has not found Trump involved in collusion with foreign citizens to warp a campaign, there is evidence that others most surely were colluding -- but are not of interest to Mueller.

It is likely that during the 2016 campaign, officials at the and broke laws to ensure that the outsider Trump lost to . FBI and DOJ officials misled the in order to obtain warrants to surveil Trump associates. National security officials unmasked the names of those being monitored and likely leaked them to the press with the intent to spread unverified rumors detrimental to the Trump campaign.

A spy on the federal payroll was implanted into the Trump campaign. campaign team paid for research done by a former British intelligence officer working with Russian sources to compile a dossier on Trump. Clinton hid her investment in dossier by using intermediaries such as the law firm and Fusion GPS to wipe away her fingerprints.

As a result of wrongful conduct, more than a dozen officials at the FBI and DOJ have resigned or retired, or were fired or reassigned. Yet so far none of these miscreants has been indicted or has faced the same legal scrutiny that Mueller applies to Trump associates.

is not facing legal trouble for destroying subpoenaed emails, for using an unlawful email server or for the expenditure of campaign money on the Steele dossier.

No president has ever faced impeachment for supposed wrongdoing alleged to have taken place before he took office -- not , not , and not even , who lied about his liaisons with in the . With the effort to go back years, if not decades, into Trump's business and personal life, we are now in unchartered territory.

The argument is not that Trump committed crimes while president -- indeed, his record at home and abroad is winning praise. The allegations are instead about what he may have done as a private citizen, and whether it could have reversed the 2016 election.

The only way to clear up this messy saga is for Trump to immediately declassify all documents -- without redactions -- relating to the Mueller investigation, the FISA court warrants, the Clinton email investigation, and CIA and FBI involvement with the dossier and the use of informants.

Second, there needs to be another special counsel to investigate wrongdoing on the part of senior officials in these now nearly discredited agencies. The mandate should be to discover whether there was serial conflict of interest, chronic lying to federal officials, obstruction of justice, improper unmasking and leaking, misleading of federal courts, and violation of campaign finance laws.

It is past time to stop the stonewalling, the redacting, the suppression, the leaking to the press and the media hysteria. The government must turn over all relevant documents to two special counsels and free each to discover who did what in 2016.

Americans need the whole truth to ensure equality under the law and to thereby set us free from this nearly two-year nightmare.