The Totalitarianism of the Now 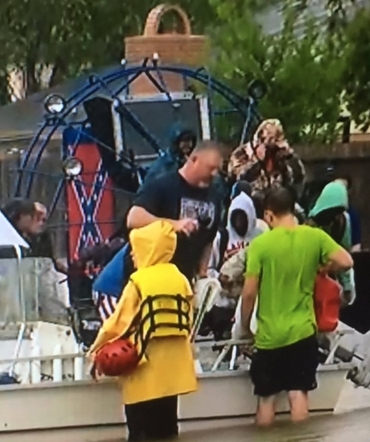 I had thought the floodwaters of Texas had at least momentarily submerged the left's war on history. But I see a Hillary Clinton staffer called Logan Anderson has been triggered by a white man with a Confederate flag on his boat rescuing black people in Houston (At left.).

At one time, this would have been a heartwarming story - like the Brits and the Krauts playing footie in no man's land at Christmas 1914. Why, look! Houston's oldest surviving Confederate general is recognizing our shared humanity by taking his boat to rescue the children of his former plantation slaves! But we live in a sterner age, and the appropriate response to an offer of rescue from a vessel flying the Stars & Bars is to riddle it below the waterline and dispatch its cap'n to Johnny Reb's Locker.

Elsewhere, the cultural hurricane swirls on. In Memphis, Gone with the Wind is gone with the winds of change buffeting the American inheritance. WREG-TV reports:

MEMPHIS, Tenn. --- "Gone With the Wind" will be gone from The Orpheum's summer movie series, the theater's board said Friday.

The Orpheum Theatre Group decided not to include the 1939 movie about a plantation in the Civil War-era South in its 2018 Summer Movie Series after feedback from patrons following the last screening Aug. 11.

"As an organization whose stated mission is to 'entertain, educate and enlighten the communities it serves', the Orpheum cannot show a film that is insensitive to a large segment of its local population," the theater's operators said in a statement.

As Scarlett O'Hara presciently observed, tomorrow is another day. Indeed, today is the only day - Pol Pot's Year Zero as Bill Murray's Groundhog Day. Upon taking office, Justin Trudeau justified each bit of twerpy modish folderol with the words "Because it's 2015." Why have a "gender-balanced cabinet"? Because it's 2015! Around the toppled statuary of Durham and Baltimore and West Palm Beach, the mob is taking it to the next level: "Because it's 2017", and anything that came before must be destroyed.

Totalitarianism is a young man's game. The callow revolutionaries like to crow that their enemies are all "old white men" who'll be dead soon, after which youthful idealism will inherit the earth. And it's true that the surviving German Nazis are all getting a bit long in the tooth. But they were young once, and bliss was it in that dawn to be alive. And to be young was very heaven: in the early Thirties the Nazis were the smooth-visaged lads gleefully torching books in the streets. They were the future, and these elderly monarchists and middle-aged democrats, queasy about the torching of the non-ideologically-compliant past, would all be dead soon enough. As the blond Aryan boy sings in Bob Fosse's film of Cabaret:

Oh fatherland, fatherland, show us the sign
Your children have waited to see
The morning will come when the world is mine
Tomorrow Belongs to Me!

Ah, but who watches Cabaret in 2017, never mind Gone with the Wind? From The New York Post comes an arresting headline - "Millennials Don't Really Care About Classic Movies":

A new study finds that less than a quarter of millennials have watched a film from start to finish that was made back in the 1940s or 50s and only a third have seen one from the 1960s.

Thirty percent of young people also admit to never having watched a black and white film all the way through â€“ as opposed to 85 percent of those over 50 â€“ with 20 percent branding the films "boring."

This is literally the cause of all our problems.

You can learn almost everything about life from movies... You will learn, for example, that you are not the first generation to have Problem X or "Solution" Y... Oh, hey, this black and white thing with the stupid title [Goodbye, My Fancy] actually has a "free speech on campus" subplot...


But you can only learn "almost everything about life" if you stumble across movies. Very few people seek out Goodbye, My Fancy (1951). For the ensuing third of a century, it was the sort of thing that would turn up on the Late Show when you weren't quite ready to call it a night - or on a rainy afternoon when you were overly familiar with that day's "Leave It to Beaver" rerun and weren't in the mood for Merv Griffin. Now we live in an age where the haphazard rewards of "stumbling across" have been entirely eliminated: You programme your own tastes on your own device, and you can live within those constraints 24/7.

The appeal of "old" stories used to be that their truths were so enduring you didn't mind the crinolines and powdered wigs: When I read bedtime stories to my little girl - Anne of Green Gables, Little House on the Prairie, Black Beauty - she did not have an adult's conception of time and so was too young to know or to care that all these people lived years before she was born and were all now dead. She was simply engaged by their quandaries. The endurance of Shakespeare is, as the clichĂ© has it, that he "understands human nature" and so you cut him some slack on the doublet and hose.

But the hyper-present-tense of our own culture has more or less inverted that: We don't mind the doublet and hose, it's the "human nature" that's the problem. So, when today's movies do the period stuff, we impose our values on their times - hence, all the "f*cks" and lesbo sub-plots in recent Miss Marples, or the ghastly boorishness of Robert Downey Jr's outings as Sherlock Holmes. Their times, our values. And because we are, in fact, engaged in overthrowing and remaking "human nature", the past's eternal verities are a particular affront.

It would be foolish to think that contempt can be contained merely to electronic entertainments. Today we insist "empathy" is a virtue, and trumpet our own incessantly. As I note in my bestselling After America:

In contemporary education's flight from facts to feelings, 'empathy"'has become a useful substitute for reality. In the schoolrooms of America, you'll be asked to empathize with, say, a West African who's sold into slavery and shipped off to Virginia, or a loyal Japanese-American in a World War Two internment camp, or a hapless Native American who catches dysentery, typhoid, gonorrhea and an early strain of avian flu by foolishly buying beads from Christopher Columbus. This would be a useful exercise if we were genuinely interested in socio-historical empathizing. But instead the compliant pupil is expected merely to acknowledge the unlucky Indian as an early victim of European racism, and to assign the slave a contemporary African-American identity and thereby 'empathize' with his sense of injustice. At this level, empathy is no more than the projection of contemporary and parochial obsessionsâ€”racism, sexism, imperialismâ€”over the rich canvas of the past and the other.

The more we boast of our "empathy", the less we have - not in the sense of the definition offered by David Berger in his book Clinical Empathy:

The capacity to know emotionally what another is experiencing from within the frame of reference of that other person.

My emphasis. Not a lot of that in the bright new dawn of our statue-free land. In an empathy-flaunting age we demand the entirety of human history think just like us - "because it's 2017". Robert E Lee must be toppled because he was racist. Thomas Jefferson must come down because he owned slaves. Christopher Columbus has to go because he had no transgender-bathroom policy on the NiĂ±a, Pinta and Santa MarĂ­a. The mobs in the street have no idea who these guys are - except that they are not like them, and so cannot be permitted to stand.