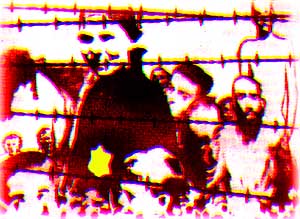 
Holocaust survivor Joseph Friedenson on why he refuses to participate in Holocaust ceremonies.

ONE SHOULD NOT wonder why Orthodox Jews do not actively participate en masse in the commemoration activities of the Holocaust. Although we all agree that the Holocaust should not be forgotten, we are not in full agreement with "what" and "how" to remember, and what lessons to draw from the Holocaust.

We find it somewhat blasphemous when most remembrance gatherings are focused on the Warsaw Ghetto uprising, or that this uprising is foisted as the central symbol of Jewish martyrdom and heroism during the Holocaust years. While we too certainly honor those who gave their lives in defense of the Jews of the Ghetto, we cannot accept the implied defamation of the honor and dignity of millions of others whose militancy did not express itself in the handling of a rifle. My late father, Reb Eliezer Gershon Friedenson, who gave away his last morsel of bread to the weeping children of the ghetto, was no less a hero for not having ever shot a gun. Nor was Rebbetzin Cyly S., who greeted me on my second day at Birkenau:

As I took my place in the food line and watched the orderly ladle out a portion of soup, I hungrily picked up the bowl -- I was literally starving -- yet, instinctively I held it at a distance. Never had non-kosher food touched my lips; and hungry as I was, I could not bring myself to taste the soup. Cyly slipped behind me and whispered, "Eat it! Eat it! It's a mitzvah to survive --- a mitzvah!" With those words of encouragement, I forced myself to eat, for she was right.

It was not until after the liberation that I learned that she herself never ate non-kosher food during her entire internment in the camps. Was she less a hero than Mordechai Anczielewicz?

And what of the thousands of young men and women who did not part with their elderly fathers or mothers, although they could have saved themselves, and accompanied them right into the gas-chambers? And those who sacrificed themselves in order that others should live? They were all heroes. Yes, we find this new segregation of heroism at the commemoration reprehensible to our whole hashkafah, philosophy, on the Holocaust.

Completing the Task of the Nazis

Some of us among the Orthodox She'eiris Hapleitah, the remnant of Eastern Europe, find it difficult to commemorate the Holocaust with those for whom "Remembering" has become the new Jewish religion; those who created a "Holocaust Judaism" to substitute for all other tenets of Judaism. Someone who declares that he remembers the Holocaust, but does not bring up his children as Jews, or does not give his children a Jewish education, does not really remember the Holocaust. Worse, he finishes that which its designers had set out to accomplish --- he carries on the work of the archenemies of our people; he is guilty of complicity with the Nazis who had plotted our disappearance, for a Jew who does not live Jewishly and who makes no effort to perpetuate Judaism is completing Hitler's work in a spiritual sphere. Crying and shouting "Remember!" --- remembering just for the sake of remembering --- does not impress me.

When others urge us to remember, I must ask: for what purpose? If their purpose is to remind the world of what had happened, then, to be sure, I can go along with them and participate in any Holocaust gathering. But if remembering should also have an inner Jewish purpose, then I must exempt myself from participating, for I find it impossible to go along with a Holocaust remembrance program that leaves out this most vital call for Jewish eternity.

Looking Back ... and Ahead

Looking back at the terrible suffering and destruction, we are saddened beyond words, yet we can draw inspiration from the spiritual heroism of so many. Even while mourning, our sights are invariably set on the future. A Jewish agenda is rich, multifaceted, and does not permit one to be immersed in despair for too long. Even Tishah B'Av is followed by Shabbos Nachamu, which is the symbol of the indestructability of our people, guaranteed by Divine promise. Our sense of Jewishness does not feed exclusively on the commonality of the shared suffering of the Holocaust. Unfortunately, there are such Jews who do not participate in "the Yom Tov cycle," and do not know the joy of mitzvah performance, the stimulation of Torah study, inner struggles for improvement, a drashah, a tisch --- these do not exist for them. If all the Jewishness they have is the Holocaust, far be it from me to deny them their sole means of Jewish identity. But to me this black chapter is but part of something much larger, part of something all-encompassing.

I am told that one of the purposes of the Holocaust memorials is to strengthen the link of the Jewish masses to Israel. The love for the Land may have a basis for enriching every aspect of Jewishness, but it can never replace Judaism, as the authors of Zionism would have us believe. Those whose Jewish identity consists only of Zionism also have my sympathy, but not my apologies. I have no intention of selling short my full-bodied Jewish identity for something so limited, limited and therefore false.

But the fact that we cannot always fully participate in the Holocaust memorials organized by secular Jews does not relieve me or my fellow survivors of our obligation to pass on our legacy to future generations --- to let them share in the riches of our childhood and witness the destruction of our youth. In 1975, I and several colleagues presented a problem before the Moetzes Gedolei HaTorah (Council of Torah Sages) of Agudath Israel of America, as to how the Holocaust should be commemorated.

Among other things, the Moetzes Gedolei HaTorah placed a chiyuv, an obligation, on all mechanchim to teach their children about the events of the horrible years of World War II, with special emphasis on the stories of kiddush Hashem the sanctification of G-d's name and mesiras nefesh, the self-sacrafice to observe Judaism during that period. Educators were also instructed to inform their students about the seventh Siyum HaShas of Daf Yomi (then about to be convened), which was set aside I'illuy nishmasam of the kedoshim (in honor of the memory of those martyred).

This decision was proclaimed, but we never fully responded to the responsibility it places upon us. This obligation, still unfulfilled, weighs heavily on our

Rabbi Joseph Friedenson, editor of the Yiddish monthly, Dos Yiddishe Vort, was the general secretary of the Agudath Israel organization which was established in post war Germany by liberated Jewish refugees.