Biden Discovers the Realist Case for the US-Saudi Alliance 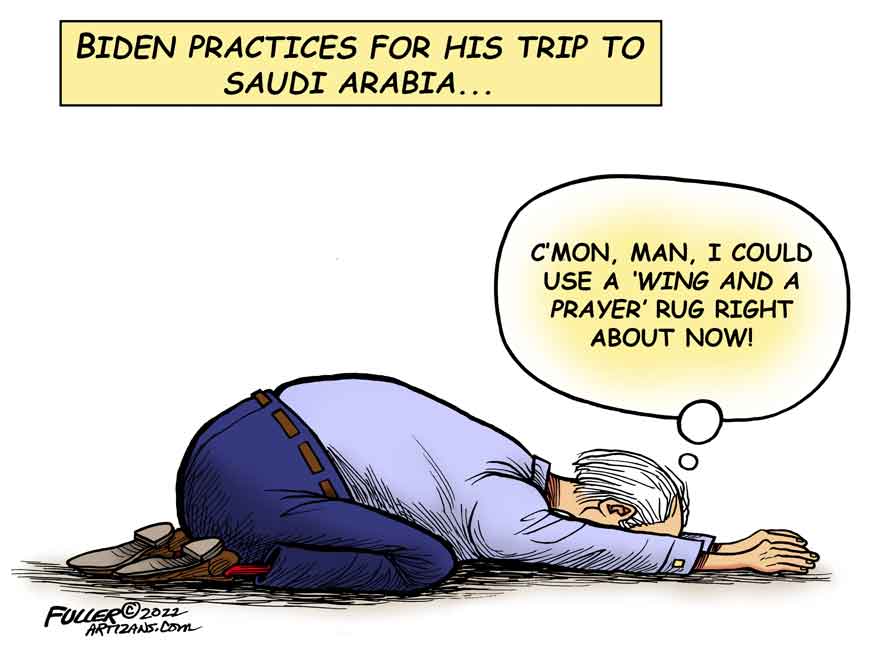 President Joe Biden, who faces four-decade-high inflation and record-high gasoline prices, is set to depart for the Middle East next week.

As part of his trip, he will visit the Kingdom of Saudi Arabia. He may not explicitly beseech the kingdom's precocious crown prince, Mohammed bin Salman (MBS), for an increase in oil output, but the timing of this trip — amid consumer jitters at the pump and destabilized global commodities markets — is surely more than mere happenstance.

It seems Biden has had a change of heart. After all, Biden's trip comes two years after a presidential campaign in which he pledged to make the Saudis "pay the price, and make them in fact the pariah that they are."

At the time, Biden was channeling the ginned up indignation directed against the Saudis, and MBS in particular, due to the fact that Washington Post columnist Jamal Khashoggi — a Saudi-born journalist who had a falling out with Riyadh and subsequently fell under rival Qatar's sprawling ambit of influence — was killed in the Saudi consulate in Istanbul, Turkey, in 2018.

(While Khashoggi's death was tragic, it is still worth pointing out that he was a former Osama bin Laden comrade, a supporter of Hamas' jihad against Israel, and a lifelong unrepentant Islamist.)

Now a year and a half into his tenure, Biden's lofty campaign rhetoric decrying Riyadh, intended to woo devotees of the Obama-era effort to "realign" America's Middle East involvement away from our traditional regional allies and toward Iran and the Muslim Brotherhood, has met an immovable object: reality. Inflation is through the roof; prices at the pump are gouging low- and middle-income consumers already bedeviled by stagnant wages. What's more, on the geopolitical stage, Tehran's revolutionary theocrats race ever closer to a nuclear weapon. Confronted with these particular domestic and foreign crises, who better to call for help than the House of Saud?

Biden's trip comes not a moment too soon. The kingdom has cozied up of late, in the absence of a steady American hand, to our Chinese archfoe. Yet many loud voices within Biden's own party disagree with his attempted rapprochement with Saudi Arabia. Rep. Adam Schiff (D-CA) said last month, no doubt focusing on L'Affaire Khashoggi: "Until Saudi Arabia makes a radical change in terms of (its) human rights, I wouldn't want anything to do with him."

Others on the party's Tehran-mollycoddling far-left, such as Rep. Ilhan Omar (D-MN), have criticized Biden's trip by invoking the Saudis' involvement in the current conflict in Yemen against Iran-funded Houthi rebels.

The cornucopia of hostile anti-Saudi rhetoric on the liberal internationalist Left, combined with no small degree of similar animus emanating from some on the neoconservative Right, is predicated upon the presumption that a Western conception of "human rights" ought to play a leading role in U.S. diplomacy and statecraft.

There is no other intelligible reason to object to cordial U.S. relations with the reformed, MBS-era kingdom, which has come a very long way from the Islamist-supporting, Wahhabist cleric-outsourcing Saudi Arabia of yesteryear.

(Of course, these same critics of warm U.S.-Saudi ties also tend to be all too eager to seek a new nuclear accord with Iran, which is not exactly "forward-thinking" in its own approach to human rights. Curious, that.)

The reality is that the reformed, MBS-era kingdom of Saudi Arabia shares core regional enemies — namely Iran, but also the Muslim Brotherhood and other Islamist movements — with the United States. The kingdom also has many of the same key strategic allies — namely, the United Arab Emirates, Bahrain, Egypt, and to a more limited extent, Israel — as does the United States. As far as a brutal region of the world such as the Middle East is concerned, that ought to be more than enough for a prudent American foreign policy to deem Saudi Arabia a friend.

That the Saudi regime is still far from a paragon of righteousness or virtue is perhaps relevant as one criterion of diplomacy — but no more than that. The transactional benefits from amiable U.S.-Saudi relations are legion.

As the most important Sunni Arab country for geographic and myriad historical and religious reasons, the kingdom's imprimatur was necessary before the Emiratis and Bahrainis signed onto the pathbreaking Abraham Accords peace agreements with Israel in 2020.

Indeed, as the kingdom deepens its own security and intelligence ties with Israel, Saudi Arabia joining the Abraham Accords itself no longer seems out of reach. More generally, in both diplomacy and military posture, the Saudis play an indispensable role in Iranian deterrence and containment.

All of this makes the Saudis natural American friends — even more so as a mutual enemy, Iran, marches ever closer to the bomb.

Joe Biden, floundering like a fish out of water and doddering in his palpable senility, faces historically low job approval ratings. His party is set for a veritable drubbing this fall. But on the issue of Saudi Arabia, Biden's recent about-face is uncharacteristically sober and cogent.

All Americans should wish him well as he embarks for Riyadh on this attempted rapprochement with a key strategic ally.