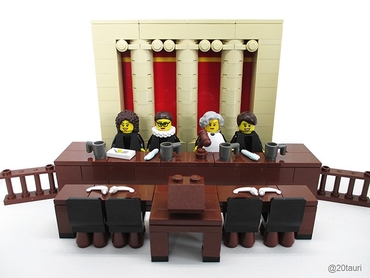 A couple of days back, I opened Fox News Primetime with a dramatic piece of breaking news:

The Daily Beast has new details of the painstaking plans that went into the most insurrectionally insurrectional insurrection ever. Normally we'd use the Fox News Alert sting to bring you this headline, but in the entire history of music there are no notes and chords dramatic enough to convey the full horror of this breaking news:

Dozens of crack G-men from the FBI descended on the home of a Pennsylvania man â€“ Robert Morss, 27 - alleged to have plotted the insurrection in league with Donald J Trump, Robert E Lee, and others, and discovered as Exhibit A in the forthcoming show trial that he had a fully finished Lego set of the Capitol Building...

The straight-shooting G-men were stunned by this Lego model of the Capitol. All students of history are familiar with the Lego model of the Taj Mahal used by the Pakistani Air Force in their planning for the 1965 Indo-Pakistan War...

...and the Lego model of Trafalgar Square used by the Luftwaffe in the London Blitz...

...and the Lego model of the Hagia Sofia built by the court eunuchs of Mehmed the Conqueror that he used to plan the fall of Constantinople in 1453...

...and the Lego model of Osama bin Laden's Abbotabad compound used by Seal Team Six to wargame the options if one of those difficult-to-fit Lego hairpieces fell off.

Just today I caught my own kids with a Lego model of the FBI's J Edgar Hoover Building complete with a Lego Peter Strzok getting his Lego leg over a Lego Lisa Page in the Crossfire Hurricane Lego briefing room.

As I usually say round about this time, sometimes a society becomes too stupid to survive. But, in fairness to the terrible, corrupt, horribly politicized FBI, the Lego Capitol building found at Robert Morss' house is at least a thing capable of being introduced in court â€“ which makes it more solid than anything they have on, say, George Tanios, who's been behind bars for four months because in effect the authorities insist on investigating the death of Officer Brian Sicknick as a homicide even though the DC Medical Examiner has ruled very, very belatedly that he died of two strokes...

Well, I was wrong on that last bit: the "fully constructed US Capitol Lego set" is not "a thing capable of being introduced in court" - because, like so much other FBI evidence from Crossfire Hurricane to Nascar's fake noose, it does not exist.

A mere thirty-six hours after I interviewed Julie Kelly and Mollie Hemingway about the Lego Insurrection, the United States Government filed a "supplemental memorandum" with the Court:

In the original detention memoranda, the undersigned stated that law enforcement found a "fully constructed U.S. Capitol Lego set." Please note that after a review of the photographs from the search, there appears to have been a miscommunication and that statement appears to be inaccurate. The Lego set was in a box and not fully constructed at the time of the search, as pictured below.

Judging from the picture below, "not fully constructed" is a characteristically DoJ evasion for "not constructed at all". See for yourself: as we do with Mann vs Steyn and Katz vs Steyn, at SteynOnline we like to post the original court documents.

"The undersigned" is Assistant US Attorney Melissa Jackson. Inventing eye-catching "evidence" that catches the fancy of the world's media would be a big no-no if you did it, but it appears to be standard operating procedure at the Department of "Justice". And, oddly enough, all the news outlets that reported on the horror of the smoking Lego gun of the Lego Capitol have failed to correct their breathless reports about the "fully constructed" building.

The United States has more corrupt prosecutors than the rest of the "free world" combined: whether you're talking about Cosby and Epstein or the FISA court, what would be a disqualifying "lack of candor to the tribunal" in most Common Law systems is just the way these guys do business.

Mr Morss' latest bail hearing is tomorrow: There is no reason for him to be behind bars for another seven months. Which is the prosecutors' earliest estimate of a trial date - although, of course, in the end there will be no trial: The point of gaoling someone for over a year supposedly to await his constitutionally guaranteed speedy trial is that it's much easier to lean on him to "settle". There's a reason the DoJ wins 97 per cent of its cases without trial.

This is an evil and indefensible system. To those rock-ribbed conservative talk-show hosts insisting that they know all the good patriotic men and women at the FBI and it's just a few bad apples at the top, I ask again: Where is there a single G-man who has objected to the Bureau's degeneration into enforcers for the Deep State? Browbeating George Papadopoulos' wife into losing her baby. Abusing Roger Stone's elderly wife. Stringing along with the #BLM fake noose. And now faking headline bollocks out of a Lego set. Every FBI agent has gone along with all of the above.

It would be nice if some of those so-called Republican legislators demanded some accountability from federal "justice", wouldn't it?

Ah, but they're waiting for the Durham Report! Durham will get 'em, wait and see! Any day now!

Does Lego make a Lego John Durham with a crack Lego team holed up at their Lego beach house in Lego Tahiti? If so, it would have more corporeal reality than the flesh-and-blood Durham.