A tale of two revolutions, and why America must be celebrated 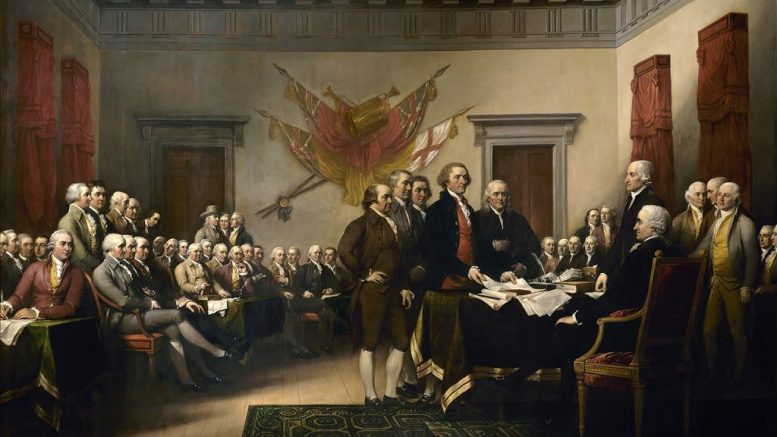 In the view of those cheering on the efforts of the Black Lives Matter movement, this July 4 will be one less of celebration than of soul-searching and reassessment. Thanks to the coronavirus pandemic, the normal festivities were always going to be muted.

But the brutal death of George Floyd on May 25 sent angry crowds of sometimes peaceful protesters into the streets seeking to topple monuments of not just Confederates, but also the nation's Founding Fathers and a host of other historical figures who don't measure up to the woke standards of the demonstrators.

As such, it is a deeply ominous sign that some advocates of the BLM movement, which has always been linked to anti-Semitic intersectional claims, are sometimes diverging from their usual arguments about racism to attacking Israel with blood libels. This week, one BLM march up Washington, D.C.'s Constitution Avenue, demonstrated its solidarity with a Palestinian "Day of Rage" by chanting, "Israel, we know you murder children too."

No doubt, some will claim that these chants are not typical of BLM sentiments, even though the movement has always supported smears of Israel. Others might say that among them were "some very fine people," a conclusion that few accepted when that sentiment was put forward by President Donald Trump about those opposed to the removal of Confederate statues during a neo-Nazi march in August 2017 in Charlottesville, Va.

But at the heart of the marches is contempt for the basic idea that the American experiment in democracy — flawed though it is — is a uniquely successful effort in expanding the realm of liberty.


As efforts like The New York Times' "1619 Project" that has served as an ideological guide to the protesters vision of America as an incorrigibly racist nation made plain, the goal of the BLM movement is not so much to reform the police or cleanse the country of hate as it is to recast the entire national narrative that has provided a haven for religious minorities like Jews.

As such, it may be an appropriate moment for Americans to think seriously about their origins as a nation and to ask not only whether this 1619 narrative is true, but to ponder as well why we should still be cheering the memory of 1776.

The "1619 Project" is so named because in the view of the Times, the arrival of the first black slaves in North America was the true beginning of American nationhood, and the revolution in 1776 was fought mainly to preserve slavery. Once we set aside this inherently mendacious premise of that account, it's important to understand that the American Revolution succeeded primarily because it was rooted in a belief in the rule of law.

The contrast with the French Revolution, which occurred just 13 years later in 1789, is apt. That revolt, inspired in part by the American example, was born in great hope. The old feudal regime was thrown away and replaced by a progressive republic. But shorn of colonial America's tradition of representative government, the exercise became a vengeful progressive exercise in tyranny as revolutionary factions tore each other and France apart over the following several years.

A little-remembered episode from that time helps explain why the insistence on individual rights in the more conservative American Revolution was superior to more "progressive" revolutions elsewhere that were rooted in utopian notions of justice that almost always led to more suffering.

In 1793, as terror spread throughout France, revolutionary mobs intent on obliterating all symbols of the ancien regime were destroying monuments, statues and artwork associated with the country's royal past. A scholar named Alexandre Lenoir sought to defend the statues and other artifacts at the royal tombs at St. Denis. His courage helped save a great deal of France's priceless artistic legacy.

The impulse to destroy and the lack of regard for individual rights that was at the heart of the revolutionary fervor symbolized all that went wrong in France. So with Americans now looking to tear down monuments, it's not surprising that we should now remember Lenoir.

One person who pointed out the analogy between that moment and our own problems, however, paid the price for doing so. As The New York Times reported, Keith Christianson, the chairman of the European paintings department at the Metropolitan Museum in New York City, posted a drawing of Lenoir defending royal monuments from the depredations of revolutionary mobs on his personal Instagram account. He correctly noted that, "How grateful we are to people like Lenoir who realized that their value — both artistic and historical — extended beyond a defining moment of social and political upheaval and change."

But Christianson seemed not to know that criticizing woke mobs, even by implication in these revolutionary times, is an invitation to a virtual version of being hauled out in a tumbrel to meet the contemporary social-media version of Madame Guillotine.

Preserving public art, even when it is associated with unpopular or discredited causes, is the obligation of civilized people, especially in times of social upheaval. But in this moment of moral panic in which preserving civilized standards of conduct has been discarded in favor of revolutionary fervor against alleged systemic racism, Christianson had committed a cardinal sin.

As the Times' Robin Pogrebin noted in an article in which she did not trouble to find a single source — in the art world or elsewhere — to speak in Christianson's defense, his implied critique of the BLM movement was unacceptable to fellow museum staffers and the social-media swarm that quickly demanded his head.


For the moment, he still has his job. His boss, Met director Max Hollein, has disavowed his critique of the mob with the requisite cant about white privilege. And Christianson has been forced to disavow his correct comparison of today's iconoclasts to Jacobin vandals with the usual Cultural Revolution-style struggle-session humiliation.

What is at risk here is not so much his future as that of the Western tradition of open discourse and the principle of defending public art against the whims of fashionable mobs. If one of the nation's leading art institutions seems ready to disavow that tradition in order to avoid a similar canceling at the hands of latter-day Jacobins, then genuine liberalism — and the soul of the arts and culture world — is in real danger.

If that is possible, then why should we be surprised when the basic premise of American freedom is called into question? If history teaches us anything, it is that a nation that destroys art and all symbols of the past quickly moves from attacking mixed-metal statues to live human beings. So if you think that once all the Confederates will be toppled that it will just be statues of Christopher Columbus, George Washington and Thomas Jefferson that are in danger, you're wrong.

It actually isn't a great distance to travel from toppling statues of America's past to chanting blood libels about Jews killing children. Which is why on this Fourth of July, it is more important than ever to stand up for the ideals of the American Revolution that the BLM movement and the country's largest newspaper so denigrates. Opposing the vandals and those trashing American history is not just an anodyne sentiment representing standard holiday fare. It is also an implicit and vital defense of the interests of American Jews . . . and all citizens who depend on the survival of the rule of law for our security.