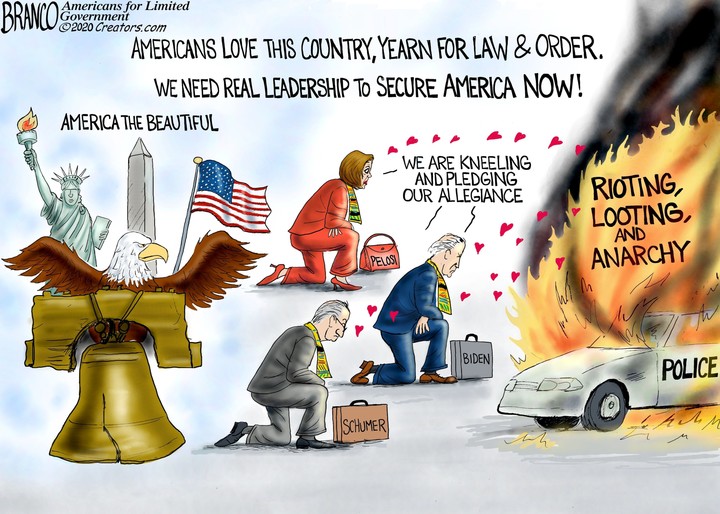 President Donald Trump is sending federal law enforcement into the big cities run by Democratic mayors, where murder and gang shootings are out of control and where once vibrant downtown areas are on their way to becoming ghost towns.

And naturally, the Democratic mayors, backing Joe Biden, are on the defensive, upset that the president might win political advantage, even as the mayors feud with their own police departments, as the violence rises in their towns, as children are gunned down.

But these Democratic cities are also where left-wing billionaire George Soros has spent millions of dollars to help elect liberal social justice warriors as prosecutors. He remakes the justice system in urban America, flying under the radar.

The Soros-funded prosecutors, not the mayors, are the ones who help release the violent on little or no bond.

In Chicago, Philadelphia, San Francisco, St. Louis and elsewhere, it is the mayors who are the faces of their cities, not the prosecutors.

And the mayors properly take the heat as the violence spikes.

How do the people process all of the politics, amid those stories counting the dead and wounded?


Politicians speak with their tongues. Taxpayers don't hold news conferences. But they do vote with their feet. And they leave.

The mayors play to their base, condemning Trump publicly for federal overreach, even as their overwhelmed police departments welcome all the help they can get.

Chaos is indeed a ladder.

If Trump truly wants to help the cities, he might privately call the mayors and ask them about the prosecutors backed by Soros.

These prosecutors are among the few politicians in America who have delivered on their promises. They promised to empty their jails through the social justice warrior policy of "decarceration." They also help give repeat, violent criminals little or no bond when arrested.

And in many of the violent cities, the prosecutors have delivered on their promises, not to keep the violent in jail, but to let them out.

In Democratic Chicago, for example, the Soros prosecutor is Cook County State's Attorney Kim Foxx. In her 2020 campaign, she reportedly received at least $2 million from a Soros backed political action committee.

Foxx doesn't have a stellar legal reputation. Her office is under investigation for how it handled that Jussie Smollett fiasco. But she'd like to climb the ladder and become a U.S. senator.

She's the protege of Cook County Democratic boss Toni Preckwinkle, the president of the Cook County Board. And Cook County Chief Judge Tim Evans is on the Preckwinkle social justice warrior team too.

Foxx announced years ago she wouldn't aggressively prosecute shoplifters. This preceded a wave of shoplifting gangs violently hitting the boutiques on North Michigan Avenue, long before looting and unrest grew out of the George Floyd protests.

And Lori Lightfoot takes the heat. She'll have to decide whether to call Foxx out herself, or just keep taking that heat.

Foxx put out a memo on June 30 reinforcing her wokeness, informing Chicago's City Hall and police that she will not prosecute "peaceful protesters."

In the hours after the Floyd protests here, many were arrested on charges of disorderly conduct and curfew violations. These are tools used by mayors to compel order in cities.

But Foxx doesn't see it that way. She sides with the woke.

A recent Chicago Tribune investigation found that of 162 offenders arrested and charged with felonies before the Floyd protests — and who were bailed out by liberal social justice warrior groups — more than 1 in 5 were charged with new offenses.

Other Soros-backed prosecutors in other cities play a similar game.

They won't anger their base when they release violent offenders back into poor neighborhoods to commit other violent acts on poor people. The left is their base. This is what they want, what Soros paid for.

In Democratic cities across America, the shootings increase, the murder rates soar, and street gangs are emboldened. Meanwhile, the angry white woke world, with their Black Lives Matter allies, continue to attack public monuments to Western culture. And police.

This all leads to scenes such as the one in Chicago the other day, with cops trying to protect a statue of Christopher Columbus in Grant Park, overwhelmed by a large, angry mob. Dozens in the crowd carried black umbrellas to hide their identities, as they dumped cases of frozen water bottles on the ground. And the mob threw them like bricks at the heads of officers.

Lightfoot, nationally famous for her anti-Trump commentary, was somewhat measured about federal agents coming to Chicago. And the other day she was incensed at what she termed a "coordinated attack" on cops at the Columbus statue.

At least 49 police officers were injured and 18 required hospital treatment after the rage at the Columbus statue, where those frozen bottles, along with rocks and fireworks, were thrown at them.

I suppose this is the place where I'm supposed to adopt newspeak and characterize the mayhem as "mostly peaceful protests." But no.

If you're a Democrat, you might worry that Trump will score political points by sending federal agents to the violent cities.

If you're a Republican, or an independent with a new police scanner app on your cellphone, waiting for your firearm owners permit in the mail, you might say it's about time.

And if you're trapped in one of the violent urban neighborhoods, you're hoping that your children won't be killed as they sit on your front porch.

You can see that something is growing in the big cities:

An overwhelming sense of lawlessness.