Carlson, Duckworth sparring could be sign of things to come 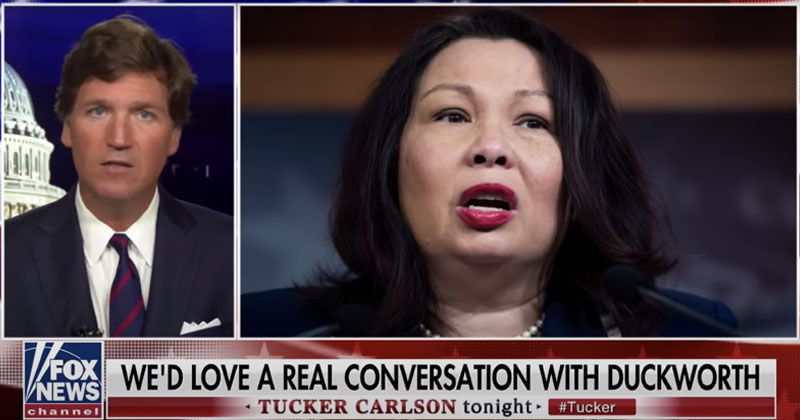 Carlson sometimes goes beyond this defamed preference for frankness by turning downright foul, and recently exercised this talent when he called Democratic Sen. Tammy Duckworth of Illinois a "moron" and a "coward."

He did not stop there on his Fox News commentary show, and Duckworth struck back. She is, after all, a tough lady, an Army veteran who lost both legs when a rocket grenade slammed a helicopter she was flying in Iraq.

This fact made Carlson's name-calling seem particularly outrageous along with a fascinating life story of her having an American father who was an Army veteran, childhood throughout southeast Asia, two graduate degrees, jobs with the Department of Veterans Affairs, election to the House and then to the Senate.

Joe Biden is considering her as a possible running mate this year, and there is reason to clap: the political demise of Elizabeth Warren and Kamala Harris.

Duckworth has had a vetting session with Biden and, as an articulate spokeswoman for rationally indecipherable leftism, is getting more attention, just lately an interview on CNN. This is what got her in Carlson trouble, for she was specifically asked whether a statue of George Washington should come down.

"Well, let me just say that we should start off by having a national dialogue on it at some point," she replied by way of political evasion, obviously recognizing there were voters out there who would say yes, that this slave-owner is a symbol of evil along with other voters recognizing heroic greatness that helped render a country that Abraham Lincoln called "the last, best hope of earth."

It's the case, too, that there has been a dialogue of sorts by way of 900 biographies and 5,000 scholarly papers, but she was anxious to slam President Donald Trump for a July 4th speech that emphasized July 4th.

She said he "spent more time worried about honoring dead Confederates than he did talking about the lives of our Americans" even though he never mentioned Confederates once. He did fret about anti-Americanism while listing diverse personalities who helped define us, such as Louis Armstrong.

The show's hostess clearly wanted to get back to the question of whether we are a heap of horror or an accumulation of blessings, and asked again whether it was a "good idea" to take down statues of Washington. Duckworth agreed he was not a traitor, but said, "I think we should listen to everybody."

Carlson then neglected Washington's celebrated lessons in civility, saying this cowardly, moronic Duckworth hated America, causing her to reply, "Does he want to walk a mile in my legs and then tell me whether or not I love America?"

That message was on Twitter, but then she wrote a New York Times article that praised Washington, said she would never topple his statues and said she would "fight to my last breath to defend every American's freedom to have his or her own opinion about Washington's flawed history."

She apparently is not aware that the most serious threat to free speech in America today comes from the leftists keeping conservative speakers away from universities, academic bosses telling scientists their research is ideologically amiss and journalists being told to go for a walk because of insufficient progressive bias.

I am not thrilled by all of Carlson's work while also appreciating his acute monologues and other fearless leaps. Right now he's dealing with the fact of a fired aide having written racist remarks, but understand, too, that a Politico article said it's conceivable that Carlson could be the GOP's presidential candidate in 2024. If old Joe Biden is elected president and Duckworth is vice president, she could easily be the Democratic presidential candidate in 2024.

This recent go-around could be the first of many debates.