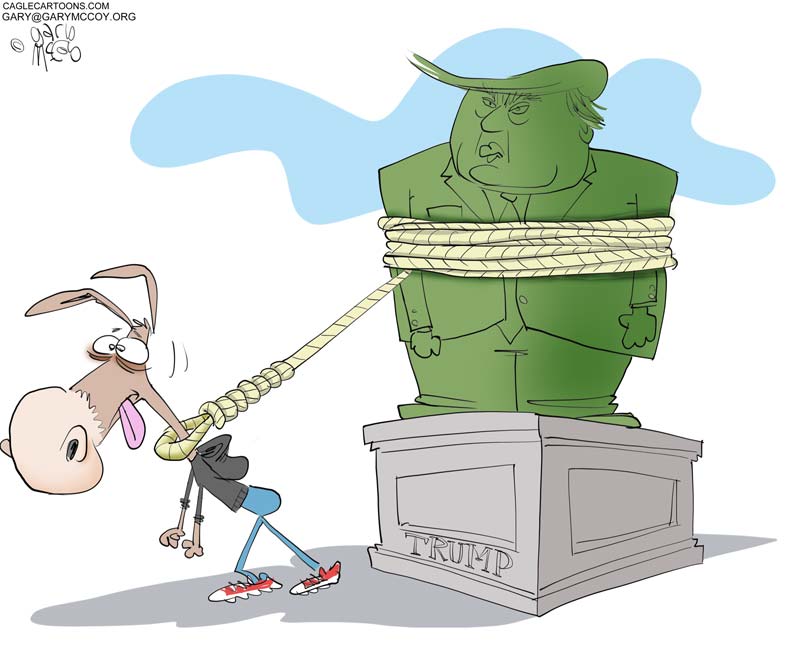 A few months ago I observed to Tucker Carlson that the difference between "Bush Derangement Syndrome" and "Trump Derangement Syndrome" was that the former was largely contained to a visceral loathing for the President himself, whereas the latter has been extended to anyone who voted for him - ie, the half of the electorate comprised of "racists", "fascists" and "white supremacists". Now TDS rampages on, to consume half the Democrats, too.

Say what you like about Nancy Pelosi, but she took back the House by running the Dems as a "moderate" party that talked about things like voter concern over health care.

A year on, and most of what the party's presidential candidates are yakking about - busing, the needs of trans-African-Americans, open borders to all six-and-a-half billion Undocumented-Americans around the world - is bonkers. The Democrat platform is a twitchy reflex that, whatever Trump is for, they're against. So he wakes up every morning, tweets his rubber hammer at their kneecaps, and they respond accordingly. He doesn't even have to hold any particular position: The actual Trump is utterly indifferent on the matter of "gender fluidity" and, from his experience as a businessman in Canada and Scotland, is not ill-disposed toward socialized health care. But the Trump of their fevers is a transphobe who wants to shove granny off a cliff, and that's who they're running against.

So the party of Big Government will no longer cooperate with the biggest government of all. Behold Eric Garcetti, mayor of a city the middle class is fleeing, where less and less works, where traffic is at a standstill, and you can't get out and walk because the sidewalks are full of tent cities, human feces and flesh-eating viruses. And his priority is non-cooperation with ICE.


And notice his artful pitch: Democrats have long abolished the distinction between "immigrants" and the millions who just walked into the country, which is why the Mayor sells his position to "Angelenos" as simply that of being a "good neighbor". Are Mexico and Guatemala "good neighbors" to the United States? Does a "good neighbor" just move into the house next door and then demand you support him in his lawlessness?

Who cares? We're way beyond that now. For the elimination of the distinction between lawful immigration and the other kind (which legal immigrants intensely dislike) necessarily leads to a more profound elimination: Garcetti and other bigshot Dems can no longer use words like "citizen" because you have to erase the line between the actual demos from which your polity draws its legitimacy and anyone who just happens to be here; the assumption behind Mayor Garcetti's sly evasive vocabulary is that citizenship - or at any rate any meaning it might once have had - has been abolished.

Fired up by this kind of talk, and by Woke Girl AOC's lurid tales that millions of children separated from their parents - or their coyotes, mules and sex traffickers - are being forced by Trump to drink from toilets, some antifa guy Willem Van Spronsen grabbed a rifle and some IEDs and attacked an ICE center in Tacoma, Washington. As a legal immigrant, I'm not especially partial to ICE, and I'm not even sure that the weekend's alleged "mass deportations" were anything more than a bit of dinner theatre: in New York City the ICE raids led to not even a single arrest, because apparently all the scary-looking guys in the full Robocop had neglected to procure warrants. But that's the point: nothing Trump has actually done would lead a rational Democrat to conclude "You know, we need to go full open-borders".

Yet they did anyway.

Speaker Pelosi has hosted meetings of "dreamers" where she thanked their parents for bringing them to the United States, because they're better than us, they're better than you. But you can cheer mass invasion and demographic replacement and still come up short, you racist. So it turns out even the vice-president to the first black president is likewise a racist:

In an admittedly absurd bit of virtue-signaling, Biden claimed to have gotten into the 2020 presidential race because he was so outraged by Trump's reaction to Charlottesville that there were "good people on both sides". And it availed poor ol' Joe naught: Whoever's on which side, he's still on the wrong one - whatever a beleaguered Mrs Biden may plead to Chris Cuomo:

The one thing you cannot say about Joe is that he's a racist.

- which itself is disrespectful:

The problem with this response is that it completely misses the point. While it may garner some sympathy for Biden, it could suggest to those wanting to hold him accountable that they are going unheard.

So it's even more racist to object to being called a racist. Hey, welcome to my world, Joe. In the 2012 election, a cocksure Biden assured a black audience that Mitt Romney and Paul Ryan were "gonna put y'all back in chains". That's how easy it was back then. He dozes off for twenty minutes and wakes up to find he's Simon Legree.

As I said a couple of years back, when everybody's Hitler nobody's Hitler. And, indeed, when nobody's Hitler everybody's Hitler. Conservatives such as yours truly are inured to what passes for "debate" in America: if I critique AOC's Green New Deal and its plans to eliminate bovine flatulence, it's because I'm racist. It's not a difference over public policy, it's simply my bigotry. This strategy of labeling rather than debating has proved so effective that Republicans have given up talking about almost anything that matters - see, e.g., immigration until Trump entered the primaries four years ago. But, precisely because labeling has proved so effective for so long, it would be preposterous to expect the labelers to confine its use only to Republicans. Especially when labeling is all they know how to do.

And so the Wokestapo (as Laura Rosen Cohen calls them) knock on the door, and Nancy Pelosi finds herself as reviled as old-time segregationists like, er, Mitt Romney. From USA Today:

No, the real issue here is what we academics call 'intersectionality' — the combined impact of racism, sexism and other types of discrimination on people and groups. In practice, it means that white women in power often take on the same characteristics of white men in power toward women of color.

So the Speaker of the House, quite without meaning to, has turned into Nancy Trumposi.

We're still a year-and-a-third from election day - plenty of time for white gays in power to take on the same characteristics of white straights in power toward trans-women of color. And also plenty of time for non-intersectionalists to weary of it all and of the ever more deranged public-policy consequences.

But this is the logic of identity politics. There can be no good-faith arguments. We are on Leninist ground: Who, whom? If I were Ilhan Omar, I'd jump in the race right now, and dare them to call me on it.