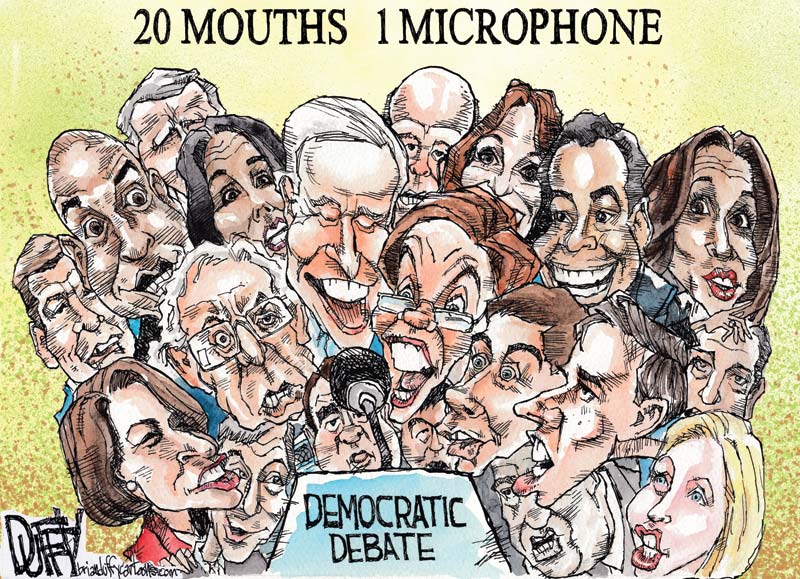 Presidential candidates from both parties usually sound hard-core in the primaries to appeal to their progressive or conservative bases. But for the general election, the nominees move to the center to pick off swing voters and centrist independents.

Voters put up with the scripted tactic as long as a candidate had not gone too extreme in the primaries and endorsed positions too far out of the mainstream.

A good example of this successful ploy was 2008 campaign. In the primary against , Obama ran to her left. But he was still careful not to get caught on the record going too far left. That way, he was still able to tack to the center against in the general election.

As a general election candidate, Obama rejected the idea of gay marriage. He blasted illegal immigration. He railed against deficit spending. And he went so far as to label then-President as "unpatriotic" for taking out "a credit card from the in the name of our children, driving up our national debt."

The result was that Obama was elected. After taking office, in cynical fashion he endorsed gay marriage, ran up far more red ink than did Bush, offered blanket amnesties and relaxed immigration enforcement.

Yet the current crop of would-be Democratic nominees has forgotten the old script entirely. Nearly all of them are currently running so hard to the left that the successful nominee will never be able to appear moderate.

leads the charge for abolishing all student debt. wants reparations for slavery. talks of jailing health insurance executives if they falsely advertise.

The entire field seems to agree that it should not be a criminal offense to enter the illegally. The consensus appears to be that no illegal entrant will be deported unless he or she has committed a serious crime.

Not a single Democratic candidate has expressed reservations about abortions, and a number of them have fought proposed restrictions on partial-birth abortions.

has said guns are a national health emergency and would not rule out the possibility of federal gun confiscation.

Early in the campaign, no major Democratic candidate has questioned the Green New Deal and its radical proposals. No one has much objected to dismantling or scrapping the . An unworkable wealth tax and a top marginal income tax rate of 70 percent or higher are also OK.

Yet none of these positions currently wins 51 percent of public support, according to polls.

What are the Democratic frontrunners thinking?

Maybe the candidates assume that the present Democratic Party is so radical and so steeped in identity politics that everyone must run to the left of all other rivals, even if insincerely so. Then, once nominated, the survivor can back off from his or her earlier radicalism, move to the center in the general election and hope that voters prefer a centrist hypocrite to an unapologetic radical.

A second theory is that we are watching a sort of progressive feeding frenzy. Twenty or so candidates have become disconnected from reality. In their echo chamber, they have no idea that they are talking radical nonsense.

A third possibility is that the Democratic candidates believe the polling on these issues is wrong. They may assume that the American people either have moved hard left and really do believe in a radical agenda, or can be persuaded with enough time and effort.

There is a fourth hypothesis. It may be that the Democratic Party would rather lose in a fashion it considers noble than win insincerely.

Maybe the goal for Democratic candidates is to advance the hard-left cause, even if suspect it will mean that their nominee will lose to in the election.

Such blind idealism is not unprecedented in American electoral history. Republican nominee knew early on that his hard-right positions would likely mean a big loss to Democratic incumbent President in 1964, but perhaps Goldwater hoped to lay the foundation of a new conservative movement.

, the 1972 Democratic nominee, may have suspected that he would be demolished by incumbent . But the hard-left McGovern nonetheless sought to preach a new sort of progressivism rarely embraced by .

Goldwater and McGovern lost in landslides. Yet eventually, true-blue conservative became the heir to Goldwater in much the same way that Obama would become their heir to McGovern.

If all of these explanations seem far out, it's only because the current Democratic candidates sound far out -- as if they either don't know how to win in 2020 or don't care to win at all.