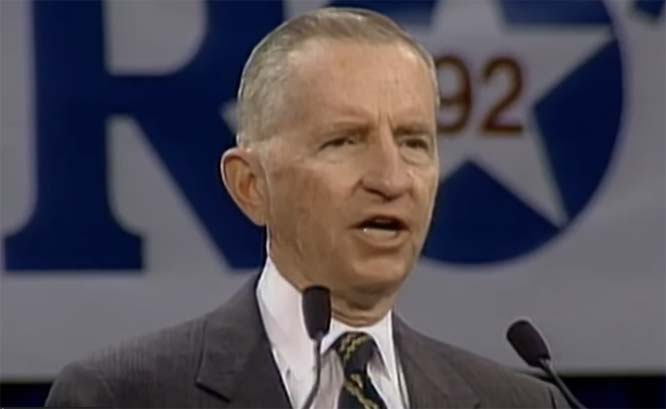 Here's my favorite memory of Ross Perot: During his 1992 run for the White House, he kept pointing out that Capitol Hill was the only workplace in America where the employees could park their cars but the owners couldn't.

"We're the owners of this country," Perot declared. "We don't act like the owners." He built his two presidential campaigns around the idea that the people (as he liked to say) should start acting as if they were the bosses, rather than scared rabbits (which he also liked to say).

The colorful and controversial billionaire, who died this week at the age of 89, is best remembered for his presidential runs in 1992 and 1996. After a stint in the Navy, he founded Electronic Data Systems in 1962 with an initial $1,000. In 1984, he sold the company to General Motors for $2.5 billion (over $6 billion today).

Perot made a virtue of wealth, and long before his presidential runs was somehow always in the news. This is a guy who in 1969 flew to Moscow to try to persuade Soviet authorities to let him add Christmas gifts for American prisoners of war to their next supply plane to North Vietnam. Who paid for security for two narcotics agents targeted by drug traffickers. Who bought horses for New York City's mounted police. In 1973, he paid for a weekend extravaganza, including a ticker tape parade, for U.S. troops who had been imprisoned at North Vietnam's notorious Son Tay prison camp — and for the Green Berets whose rescue mission went awry when the prisoners turned out to have been moved elsewhere.

When Perot spent 1991 and 1992 musing publicly about whether or not he should run for president, nobody took him seriously. But once he got into the race, he drew enthusiastic (or at least curious) crowds. To those who found themselves sick of the incumbents, Perot was attractive. "The guys in Washington," he would remind the crowds, "work for us."

People liked him. He prefigured Donald Trump in the sense that he was, as one study notes, "a walking oxymoron — a billionaire populist, an extraordinary ordinary person." The scholar Roderick P. Hart referred to Perot's grassroots supporters as "an assemblage of malcontents" — people who were for one reason or another unhappy with politics or with the country's direction, but who found Perot relatable: "He's like us, only richer."

Only richer: Back then, a billionaire running for president was a new and strange thing. Few voters my age are likely to forget Dana Carvey's delicious send-up of Perot on "Saturday Night Live." Carvey/Perot promised to take no salary should the nation's economy remain flat or grow by only one or two percentage points. But should it do better, he'd get paid:

The skit was hilarious — and not only because Carvey is so talented. It captured perfectly the zaniness of Perot's campaign, the way he'd say whatever came to mind, but also the way that all these zany ideas made a certain weird amount of sense. And although Perot won not a single electoral vote, he drew an astonishing 19% of the popular vote.

A furious GOP believed that Perot cost President George H. W. Bush his reelection. One might respond that there was a recession on, and Bill Clinton was a formidable campaigner. But it's also true that Perot got an awful lot of coverage. No wonder. He was so much fun, and unlike some candidates who've garnered lots of coverage, never seemed to be mean. Also, as Hart points out, Perot stoked the anti-incumbent fervor from which Clinton profited.

To be sure, Perot had his missteps, including a series of apparent switches over his position on abortion. When he spoke before the NAACP convention, he offended many by referring to black Americans as "your people."

Then there's the matter of his unapologetic membership in a Dallas club without black or Jewish members. Asked about the controversy by Larry King on CNN, Perot essentially shrugged it off. "It's a safe place for my family to swim and do things like that," he said. He also promised to "quit immediately" if his association "bothers the people." The exchange provoked a deliciously droll response from the journalist Hendrik Hertzberg, at that time with the New Republic: "There is a perfectly adequate swimming pool on the grounds of his own house. It is not far from the tennis courts."

Fair enough. And there were reasons to doubt other aspects of Perot's public persona. For example, the much ballyhooed 1979 mission he paid for to rescue his company's imprisoned employees in Iran may well have been responsible for the escape of thousands of violent inmates, including murderers and drug dealers.

Nevertheless, Perot was colorful, back when candidates for office were permitted to be colorful. His relentless populist attacks on the incumbents and the existing party structure are often said to have altered American politics. I'm not so sure. Yes, some will rush to blame Perot for Trump, but I think a cleaner case is to blame the parties for their distance from the voters — a distance, I would suggest, that continues.

Perot was never entirely to my taste, but I'm going to miss him. And when I think about his quixotic presidential campaigns, I will always come back to that zinger about how the owners — "the people" — can't park on Capitol Hill. Go ahead and try to find a space not reserved for the self-important whose salary you pay. You'll quickly discover how right Perot was; and how little has changed.