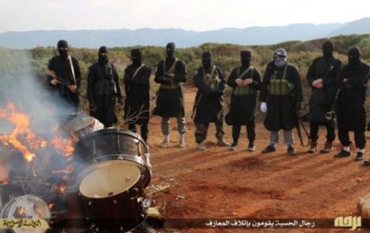 Apologies to all my readers: Last week I carelessly wrote about President Trump's Warsaw speech as if the words therein corresponded to the definitions ascribed to them by Oxford, Webster's or any other English dictionary. My mistake. Apparently the plain meaning of the words is entirely irrelevant. Because the words aren't words per se, they're "dog whistles":

As James Taranto noted during a previous dog-whistling frenzy:

"The thing we adore about these dog-whistle kerfuffles is that the people who react to the whistle always assume it's intended for somebody else," he wrote. "The whole point of the metaphor is that if you can hear the whistle, you're the dog."

Indeed dog whistles are all they hear. If Trump is, as has been said, the all-time great Twitter troll, in Warsaw he was trolling for western civilization, and an entire army of mangy pooches began yowling and - to mix canine metaphors - set off like greyhounds in pursuit of a mechanical hare. Even if the speech had not been worth it on its own merits, it would still have performed a useful service in demonstrating that the western left now utterly despises western civilization. The most pathetic humbug:

Ours is the civilization that built the modern world - as even the west's cultural relativists implicitly accept, if only because they have no desire to emigrate and try to make a living as a cultural relativist in Yemen or Niger.


Because you can't. Only a very highly evolved and advanced civilization can support a swollen elite grown rich on contempt for it. Most of the lefties stuck to the big-picture contempt: the dog whistles of faith, family, God, west, civilization. But for The Washington Post's Jonathan Capehart the most deafening dog whistle of all was played by a full-size symphony orchestra:

There was a line during Trump's oration that sounded like an off-beat cymbal in his rhetorical sis-boom-bah in "defense of [Western] civilization itself." See if you can pick it out.

'We write symphonies. We pursue innovation. We celebrate our ancient heroes, embrace our timeless traditions and customs, and always seek to explore and discover brand-new frontiers.

'We reward brilliance. We strive for excellence, and cherish inspiring works of art that honor God. We treasure the rule of law and protect the right to free speech and free expression.'

"We write symphonies." What on Earth does that have to do with anything?

Well, I would have thought that was obvious, though apparently Washington Post columnists need it spelled out: Trump is hymning the unique range of western achievement, not just the structures of functioning self-government, the rule of law and free speech, but the greatest accomplishments in science and intellectual inquiry, and a magnificent legacy of artistic expression, too, from paintings and cathedrals to plays and symphonies. What's to argue about?

But the Warsaw Philharmonic strikes up and all Jonathan Capehart hears is "Old Shep". "We write symphonies"?

In that one line, taken in context with everything else Trump said, what I heard was the loudest of dog whistles. A familiar boast that swells the chests of white nationalists everywhere.

Is it "a familiar boast"? It's not clear to me that pre-Trump it was a boast at all among "white nationalists". I see that the wine writer Andrea Frost has observed that (in Europe) "given music, we write symphonies", but she seems fairly antipathetic to Trump and an unlikely stray at the alt-right dog pound. At any rate, Capehart is eager to dispel the notion that symphonies are the work of tub-thumping white nationalists like Mozart and Mahler. Get a clue, losers:

Those symphonies Trump says "We write" (ahem) would be real lame without the influence of the Middle East and Muslims. According to Salim al-Hassani, chairman of the Foundation for Science, Technology and Civilization and editor of "1001 Inventions," which chronicles "the enduring legacy of Muslim civilization," told CNN years ago that the lute, musical scales and the ancestor of the violin are all part of that legacy.

So Beethoven's Eroica, Brahms' Fourth, Tchaikovsky's Sixth would be "real lame" without "the influence of the Middle East and Muslims".

So says a senior writer in the establishment newspaper of America's capital. On the basis of what? A lone reference to the umpteenth lavishly-funded straw-clutching special-pleading Islamofest created to explain why the casual observer is entirely wrong to conclude that the Muslim world is culturally moribund and entirely irrelevant to the planet's artistic, scientific and economic progress (with the single solitary exception of oil that they require foreigners to get out of the ground for them). The casual observers who've come away with that unfortunate and ignorant misapprehension include, inter alia, a fellow I quoted in America Alone:

In the words of Dr. Mahathir Mohammed, the former prime minister of Malaysia, one of the least worst Muslim nations in the world, "We produce practically nothing on our own, we can do almost nothing for ourselves, we cannot even manage our wealth."

But pay no attention to Dr Mahathir. What does he know about Islam's achievements compared to a senior columnist at The Washington Post? Sure, they may not have done anything much for a millennium or so, but we all know that everything in your world would be "real lame" without Islam. How stupid is Trump? He doesn't even know that, without Islam, we'd be in a lute-free world!

Who knew? When CAIR was named by the Feds as an unindicted co-conspirator in that terrorism-funding case, it was no doubt because the FBI wiretappers eavesdropped on the planning meeting for the CAIR Symphony Orchestra and misunderstood when the imam said, "Where have you stashed the lute?"

The evidence for this is - to put it politely - wafer-thin. Insofar as the lute has anything to do with Islam at all, it derives from the pre-Islamic east - like the one I saw in the British Museum a couple of years back from Mesopotamia, circa 3,000 BC. Then Mohammed showed up and that was the day the music died: Drove my camel to the wadi, but the wadi was dry.

Besides, what's a Mesopotamian lute got to do with Mahler's Second Symphony? That's barely more relevant than Schubert's mum telling the neighbor, "My boy's on his third symphony", and the lady next door saying, "Well, my boy can fart 'Wake Me Up Before You Go-Go'. Light 'em up, Johnny!"

A less deranged response to Trump would be that other cultures hear music differently - which is true. For example, in Bali they prefer Gamelan ensembles to the configuration of a western symphony orchestra. I happen to think the latter is a more advanced form, but I accept that Balinese ears hear something in the former that I don't (and, in my own contribution to cultural appropriation, I put a bamboo flute in my record of "Year of the Siamese Cat" on Feline Groovy). But this is the insanity of warp-speed cultural relativism: The Washington Post is not arguing the equivalence of alternative music cultures to Brahms and Mozart; it's arguing the merits of a culture that is largely bereft of music as a matter of conscious policy. Our symphonies would be "real lame" without Islam? They're even lamer with Islam, in a world where drums, saxophones, pianos and other "un-Islamic instruments" are burned, where music is banned from Mali to Afghanistan, and where the performers thereof are either executed or, if they're lucky, get 90 lashes. On that last story, by the way, you'll see from the accompanying photograph that one of the discarded "un-Islamic instruments" appears to be - go on, take a wild guess - a lute.

Even when Islam isn't actively destroying music, it is at best indifferent to it. Which is why, if you operate a legacy symphony orchestra in a fast Islamizing European city, you have to draw your patrons from further and further afield - as a gloomy orchestral promoter was explaining to me not so long ago.

Does Jonathan Capehart know any of this? No. He's attitude-striking, as the left is wont to do. Trump's pose appalls him, and he suspects that the President is no attendee of the symphony. He may be right about that. On the evidence of the Trump rally I attended , he likes Andrew Lloyd Webber and Elton John rather than Wolfgang and Ludwig. But hypocrisy is famously the tribute vice pays to virtue, and it is important that fans of Sir Elton occasionally doff their hats to Bach and Haydn: aspiration is a critical element of a civilized society. Once upon a time even the pop songs knew that:

And with a pedal
I love to meddle
When Paderewski comes this way
I'm so delighted
If I'm invited
To hear that long haired genius play...

Paderewski? Wasn't he a Pole? Yeah, sure, but he culturally appropriated it all from Waleed the lute-player.

Jonathan Capehart can't whistle four bars of Islamic music, not even the call to prayer (which, if this kind of civilizational self-loathing keeps up, he'll know soon enough). I vaguely suspect he couldn't whistle four bars of a symphony either, save perhaps the first four notes of Beethoven's biggest hit. In that sense, cultural relativism leads only to a cultural void - not multiculturalism but a-culturalism.

To be fair to the left, they invest a lot of time in undermining language, to spectacular effect. As strange as it might seem to younger readers, not so long ago the word "penis" was understood to refer to the male sex organ. Now The Vagina Monologues gets canceled because of its cis-supremacist implication that women with penises aren't the real deal. In such a world, any word can become entirely unmoored, so that it seems perfectly natural for a prominent media figure to be arguing that the great symphonic composers owe everything to a culture that has not produced a single symphony. And nobody laughs.

I'm glad the President put in a word for symphonies. It is a good thing for a western leader, amidst all the pandering to dreary and meretricious fashion, to stand up for our splendid musical inheritance. I wish more would do it. But it's now too "controversial" for fainthearts like May and Merkel and Macron. Because to the sophisticates of our leading newspapers two sentences of specious bollocks by Salim al-Hassani can single-handedly demolish every conservatory across the planet. In the symphonic sweep of our civilization, I fear we are well into the fourth movement.