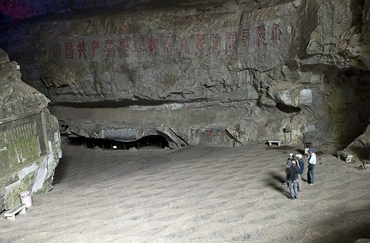 Peter Daszak and his team visit a bat cave in Guilin, China in search of their next fall guy

We are in a literally Orwellian world now.

Until a couple of days ago the headline on this Washington Post story from February 2020 read:

Democracy dies in darkness, but stealth editing thrives there. That's Orwell 101 - although one assumes whichever of Bezos's woeful hacks was ordered to do it was unaware of his literary antecedents, or self-respect would have required him to seek alternative, less pitiful employment. Nevertheless, as you'll know if you heard my serialization of Nineteen Eighty-Four, that was literally Winston Smith's job - to go into the archives and rewrite past editions of the newspapers to conform to the needs of the present.

And to ensure that versions of the past less helpful to the regime get, in one of Orwell's many brilliant coinages, "memory-holed".

Our chaps haven't been memory-holing quite as long, so they're not as smooth and assured about it as Winston Smith's Ministry of Truth. Commissar Zuckerberg's Facebook will now permit you to suggest that the ChiCom-19 may have "escaped" from a lab - in contrast to the rules a week or so back, when so much as raising the possibility got your account vaporized. Wikipedia isn't quite so quick on the uptake: as I write, the lab-leak origin of the WuFlu still comes under "Covid-19 misinformation" as a theory used "to stoke anti-China sentiments". But presumably the lads are modifying even as I speak.

Gee, it's almost like they all got the same fax from head office. So what was a fortnight back a conspiracy theory that could not be mentioned is now acceptable in polite Zuck-policed society. Not because any new proof has emerged one way or the other: there has always been more evidence for a Covid lab leak than for the bat theory, not least because the relevant bats live a thousand miles from the Wuhan wet market.

When you boil it right down, the fledermaus theory of the WuFlu rests mainly on "scientist" Peter Daszak. Mr Daszak is this season's omnipresent British subject: He is to bats what Christopher Steele is to Russians; his job is to maintain them as the McGuffin.

So, on the one hand, Peter Daszak is the US government's principal middle-man (via the "non-profit" EcoHealth Alliance, which he heads) for funneling American tax dollars to the Wuhan Institute of Virology. His principal research activity for the last decade has been coronavirus gain-of-function projects with Shi Zhengli, the lady who heads said institute in Wuhan.

On the other hand, Peter Daszak was also the only "American" member of the team the WHO sent to China to "investigate" the source of the virus. He was the organizer of the letter from twenty-seven virologists to The Lancet saying ChiCom-19 was of natural origin. And he was the "expert" relied on by Zuckerberg to ban lab-leak chit-chat on Facebook.

In none of these activities did he disclose his conflict of interest - that the institution he was absolving was his principal business partner, and run by his closest professional colleague, who has denied, risibly, that any of her employees ever got sick from the WuFlu, and certainly not in the fall of 2019.

So, if you're one of those who appealed to Zuckerberg to let you have your Facebook page back, well, good luck with that: That's like appealing your alimony to a judge who's dating your ex-wife.

As with "former" MI6 man Steele, one is impressed at how plugged in Daszak is at the highest levels. Here he is on April 18th 2020 emailing Fauci direct:

I just wanted to say a personal thank you on behalf of our staff and collaborators, for publicly standing up and stating that the scientific evidence supports a natural origin for COVID-19 from a bat-to-human spillover, not a lab release from the Wuhan Institute of Virology.

"On behalf of our staff and collaborators": The latter Daszak intends, one presumes, in the business-associate sense not the Occupied France sense. That said, the easiest way to make sense of anything is to consider whether the latest surprising development serves the interests of the Chinese Communist Party.

No western government agency should be experimenting with lethal viruses in a facility documented to be as slapdash about safety protocols as the Wuhan Institute of Virology. But let us say the leak was accidental. Occam's Razor suggests that it's entirely obvious Chairman Xi would use it to rid himself of the US-China "trade war" (remember that?) and the one American politician serious about arresting and reversing the rise of Beijing.

Sign up for the daily JWR update. It's free. Just click here.
Furthermore, Xi knew he could rely on America's media-corporate-showbiz nexus to "collaborate" on that. What may have surprised him, if only in the totality of its fetal posture, is the west's willingness to tank its economy, wall up its citizenry for a year, and howl down anyone who wanted to blame the perp as "racist".

So maybe it's time to take it to the next level. Right now, the global Covid death toll is closing in on four million. To many among the Covid scoffers, that's chump change relative to the world's population, and anyway a lot of them were getting up there - in their nineties, late eighties, early sixties... But once upon a time killing four million people used to be regarded as a big deal in and of itself. As of today the preponderance of the evidence is that they were killed by a virus that escaped from a lab funded by the Government of the United States.

You don't think Xi can't make that work for him? Is Trump still talking about reparations? "Okay, you first," says Beijing. How do you think India and Brazil feel about Fauci's games of function at the virological equivalent of the CIA's overseas rendition sites? Or the European Union, which semi-crippled its economy in semi-perpetuity? France closed its restaurants and told them to do (dread word) "take-out": wouldn't you like to stick it to the Yanks for that?

The anxiety of the entire American establishment to protect the Chinese Communist Party is remarkable. Prominent Americans from Joe Biden to Mark Zuckerberg to Lebron James apparently prioritize loyalty to China over pretty much everything else. We normal Americans need a much better understanding of why this should be true.

To which Roger L Simon provides the obvious answer. These guys figure the Chinese have already won - and therefore, unlike Kraut-chummy Parisian trollopes in 1945, there will be no price to be paid for "collaboration":

A perfect example is giant Apple whose most recent quarterly China revenue came in at a record-breaking $21 billion+. At the same time we got all sorts of 'social justicey' talk from CEO Tim Cook.

What Cook is doing, cashing in big on one side while mouthing 'liberal' pieties on the other, suits the Chinese communists perfectly well, essentially enabling them. Apple then becomes a linchpin of American communism much in the way Huawei is a linchpin of Chinese communism. (Not inconsequentially, Apple's top five executives, including Cook, earned a total of almost exactly $120 million in 2020, up 13 percent during the pandemic.)

Almost our entire corporate world is trotting eagerly behind.

What will Zuckerberg, the Weirdbeard and the other commissars permit us to talk about? Over the weekend, I was asked to weigh in on the latest big Twitter fever - the vital question of whether or not Donald Trump had his trousers on backwards when he addressed the North Carolina Republican convention. The entirely predictable answer? No.

Yet, if Chairman Xi were to express a preference for wearing pants backwards, one has the strange feeling the WHO and CDC would recommend it and Zuckerberg, and The Washington Post would dismiss dissenters as conspiracy theorists, and Lebron James and John Cena would apologize for accidentally wearing their zippers at the front.

While we twitter, the entire western world has been debagged.