The unacknowledged war with Russia 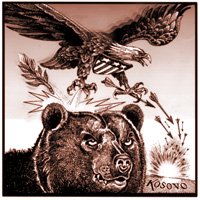 President Joe Biden had a three-hour talk with Russian Premier Vladimir Putin in Geneva on June 16, said he laid down some red lines Russia had darned well not cross and that it was his hope this guy he once called a killer does not want another Cold War.

In fact, this killer has already started a war, refuses to call it off by denying he is doing it, and Biden has meanwhile agreed on a project putting Russia's interests over those of the United States.

Destructive, deadly war, it should be understood, has come to include coffee-sipping, happy hackers right up there with brave, self-sacrificing soldiers, tanks, bombs, artillery bombardment, ships at sea, jets with missiles and all that stuff.

These hackers are people who can mess with computers to the extent of depriving society of just about anything. They can take data critical for an operation to survive and fix it so the operation does not survive and there is cataclysm outside the operation.

Consider for a minute something usually referred to as SolarWinds, executed by Russia over about nine months in 2020, a cyberattack that included access to email accounts of dozens of businesses and such federal entities as the Nuclear Security Administration, the Pentagon, the State Department, the Department of Homeland Security, the Department of Energy and the Department of the Treasury.

Described as the "largest and most sophisticated (cyber)attack the world has ever seen," its full effects may not be known for years of insecurity, but that will not lessen them.

President Donald Trump was pretty much missing in action, but, as his successor, Biden instituted Russian economic sanctions while also, by way of conciliation, announced "now is the time to de-escalate." Putin instead kept hugging ransomware in which hackers take such computerized information as contracts, all kinds of records, legal statements, procedural guidelines, product details and personnel data and render it indecipherable.

An organization is thereby reduced to helplessness until it sends money getting the crooks to retranslate computerized gibberish into the understandable. Not just businesses, but schools, health facilities and all kinds of vital institutions can be affected. The hits happen at a rate of seven an hour, the annual costs are in the billions and millions of Americans are affected.

Putin says Russia is not in control of any malware terrorists apparently capable of the gradual dismantling of America, but that would be a disgrace to his totalitarianism if true and it is not true, according to American intelligence.

One cannot help but mention an especially frightening occasion when a ransomware entrepreneur, a Russian group called DarkSide, went after a 5,500-mile pipeline providing nearly half the auto fuel on America's East Coast and thus creating havoc not just in getting to work and back, but to getting groceries and visiting the doctor and just living everyday lives.

To his credit, Biden gave Putin a list of 16 critical infrastructure sectors that would instigate U.S. retaliations if smashed by cyberattacks, including such essentials as providers of food, transportation and communications. Biden mentioned the strike-back option of eradicating pipelines in Russian oil fields, but experts seemed to doubt Putin would take him seriously even as cybersecurity talks are planned.

Biden and Putin also blessedly agreed on Russia and the United States resuming nuclear weapons talks, but what hurt even before the Geneva session was Biden agreeing on continued construction of a Russia pipeline potentially making it the foremost natural gas supplier in Germany and much of Europe. Biden's purpose seems to have been to stay on Germany's good side, but that's not necessarily the future's good side.

Biden once summed Putin up by saying he was a man with "no soul," and although it is said you cannot prove a negative, this might be an exception.

Right now, Putin is dealing with political opponents by such techniques as incarceration, for instance, but here is what seems to me obvious and more horrid: Russia is at war with us as we have so far done little about it.

Christine M. Flowers is a lawyer and columnist.