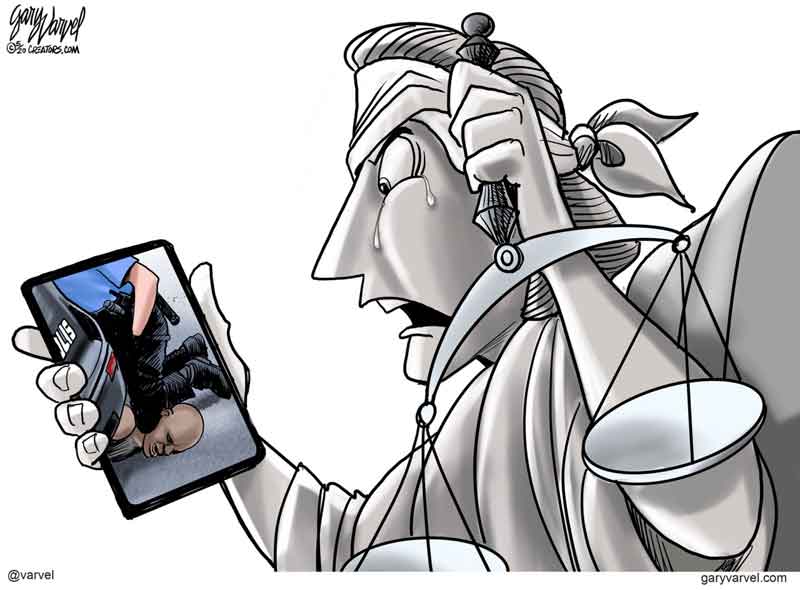 The outrageous murder in Minneapolis of George Floyd, a 46-year-old African-American man, by local police is a crime that cannot be tolerated or excused. Efforts by extremist agitators to hijack peaceful demonstrations and turn them into violent riots should also be condemned and not falsely rationalized as a form of legitimate protest or part of a necessary path to progress.

Sensible people know both those things can be equally true, and that concerns about the anarchy in the streets of major cities shouldn't diminish our anger about Floyd's death or any other crime that appears rooted in racism.

This perilous moment in American history should have created a consensus about the need to address both injustice and nihilist violence that ought to transcend partisanship. That is why Jewish organizations and religious groups have joined with people of faith throughout the denominational spectrum to express their dismay about what happened to Floyd, as well as their desire to combat prejudice.

But not everyone is prepared to observe the political ceasefire most Americans would prefer to observe in the wake of these traumas. And, as always, some of those looking to exploit tragedy are attacking Jews.

That was made clear when a synagogue and Jewish-owned businesses were vandalized in Los Angeles with pro-Palestinian propaganda. In and of itself, that would be terrible, but those buildings were just a few out of the innumerable places around the country that suffered the same indignity or worse.


The context for that incident — and the spate of anti-Jewish and anti-Israel hate that has flourished in recent days on the Internet — is not random anger that could have been directed at any target, no matter how removed it might be from the incident that set off this crisis. Such incitement is the direct product of an intersectional movement that has continued to attempt to link crimes committed on American streets against African-Americans with the conflict between Israel and the Palestinians. And just like other forms of prejudice for which there should be no tolerance, the effort to blame Israel or Jews for what rogue American cops might do needs to be clearly labeled as a form of hate speech.

The effort to manufacture a connection between slayings of African-Americans with Israel isn't new. The notion that the struggle for civil rights in the United States is connected to the Palestinian war on Israel has become a staple of the BDS movement. It is rooted in intersectionality, an idea that has gained popularity in certain sectors of academia. It asserts an affinity between the struggles of people of color or indigenous populations against imperialist and racist hierarchies. So if you think all Jews in Israel are the moral equivalent of white European settlers in Africa, the notion that blacks who oppose systemic racism in America are fighting the same good fight as Palestinians resisting Zionism makes sense.

That is what is behind the cartoon that has circulated on social media showing an Israeli soldier sitting on the neck of an oppressed Arab next to the image of rogue Minneapolis cop Derek Chauvin suffocating a dying George Floyd under the caption "black lives matter." The same disingenuous analogy was behind the tweet by a group calling itself the US Campaign for Palestinian Rights, which attempted to claim that U.S. police departments are sending personnel to Israel to be trained to attack unarmed blacks.

The Black Lives Matter movement has made these arguments before, but the anti-Zionist Jewish Voice for Peace group has particularly embraced this canard. JVP's "Deadly Exchange" program fits into its efforts to promote boycotts of Israel. Asserting that Jewish groups that have facilitated trips to Israel by American first responders and police are somehow responsible for killings of unarmed blacks by U.S. cops is not only untrue, it's a classic example of an anti-Semitic blood libel since it seeks to blame Jews for gruesome crimes for which they bear no responsibility.

The training Americans get in Israel has little to do with the attacks that JVP and other BDS groups claim to oppose. It actually focuses on the antithesis of stereotypical police brutality by seeking to promote community engagement and nonviolent policing that would make confrontations less likely.

The willingness to buy into the big lie about Israelis teaching Americans to kill minorities is based in ignorance of the true nature of the conflict between Israel and Palestinian terror groups. Contrary to the intersectional myth, Jews are not colonial oppressors in Israel. Jews are not only indigenous to the country that is their ancient homeland. A majority of Israelis also fall into the category that left-wing ideologues would term "people of color" since their families came to the country from homes in Arab and Muslim lands from which they fled or were expelled after 1948.


The mission of the Israel Defense Forces is not racial oppression. It's to defend the people of Israel against foes, which have not given them a day of peace in the 72-year history of the country. Its record in protecting civilian lives, including Palestinians who are used as human shields by terrorists, is unmatched.

Stripped of its mendacious rhetoric, intersectionalism is a thinly disguised form of anti-Semitism. So it comes as little surprise that anti-Israel groups are breathing new life into these falsehoods whose purpose is fueling hate against Jews, rather than seeking justice for George Floyd and African-Americans.

We can embrace a crusade against racism and police misconduct without endorsing the notion that all police are equally guilty of such crimes, or that the American nation is irredeemably guilty of intolerance. Similarly, it is vital that all decent people should reject the attempts to smear Israel and its American friends by associating them with incidents like the Floyd murder.

Though some wrongly associate it with anti-fascism, intersectionality is hate masquerading as advocacy for the oppressed.